Madame Blavatsky – Who Was She?

Madame Blavatsky was born in Russia in 1831 and lived till 1891. She is the pioneer esotericist of our age. 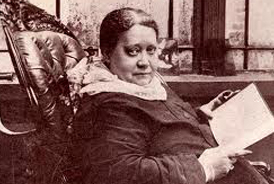 What She Did.
What She Wrote.
Chronology of Her Life.

1849 Married Nikifor Blavatsky, a State Official, very much her senior.

1852 Embarked for Canada later in the year; went to New Orleans, Mexico, South America, West Indies, thence via the Cape and Ceylon to India.

1853 Attempted but failed to enter Tibet. Returned to England via Java.

1854 Came to America again, crossing the Rockies with a caravan of immigrants. May have visited South America again.

1855 Left for India late in the year, via Japan and the Straits.

1858 Returned to Europe via Java, staying in France and Germany. Then returned to Russia, reaching Pskov on Christmas Night.

1860 Left for the Caucasus early in the year, where she traveled among the native tribes, remaining there until 1864-65. Experienced severe physical and psychic crisis acquiring complete control over her occult powers.

1866-67 Left Russia again and traveled extensively in Balkans, Egypt, Syria, Italy. Returned to Italy in 1867 and paid a short visit to southern Russia. Was present at the battle of Mentana, November 3, 1867, and was wounded.

1868 Went to India and Tibet with her Master.

1871 Embarked for Egypt and was shipwrecked near the island of Spetsai, July 4.

1871-72 Settled in Cairo. Traveled to Syria, Palestine, Lebanon in 1872, returning for a short time to Odessa.

1873 After brief travels in Eastern Europe, went to Paris in spring. On her Master’s orders left for New York, landing July 7.

1877 Published her first great work, Isis Unveiled, in the fall.

1879 Launched her first magazine, The Theosophist, in October, which resulted in rapid growth of Theosophical work in India, 1879-83.

1884 Left for Europe, February 20, accompanied by Olcott and others. After visiting Nice, settled for a while in Paris to work on The Secret Doctrine. Briefly visited London. Moved to Elberfeld, Germany, in the fall. Went to London in October and soon after sailed to India, reaching Adyar December 21.

1885 Gravely ill, February. Sailed for Naples March 31, leaving India for good. After a brief stay at Torre del Greco, settled at Wurzburg, Germany, where she wrote a large part of The Secret Doctrine.

1886 Moved to Ostende in July, visiting Elberfeld on her way.

1887 Transferred her residence to London in May, where the Blavatsky Lodge was established, and her second magazine, Lucifer was launched in September.

1889 Published The Key to Theosophy and The Voice of the Silence.

1890 Established European headquarters of the Theosophical Society, at 19 Avenue Road, London, where she died.

Note: Chronology taken from H.P.B.: The Extraordinary Life and Influence of Helena Blavatsky, Founder of the Modern Theosophical Movement – by Sylvia Cranston. (This is the best biography of Madame Blavatsky, representing many years of research in its preparation.)