This essay was written with Theresa E. DiDonato.

“Eigentlich bin ich ganz anders; ich komm nur viel zu selten dazu.”
[I am actually totally different; I just don’t get around to it most of the time.]
— Udo Lindenberg, noted German rock man and poet 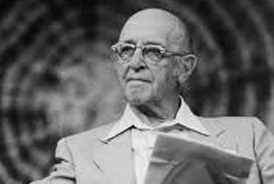 Michelangelo Buonarroti (1475 – 1564) presumably said that of his creations, such as his sculptures of David and Moses, that they were already inside the blocks of marble before he started working on them. All he did was to release the figures by chipping away at the marble. Ah, what a metaphor! What modesty! But surely, Mr. Buonarroti was jesting for he could not have said the same about his ceiling mural in the Sistine Chapel or his architectural work on the dome of St. Peter. We once tried to write an article by taking black sheets of paper and rubbing away the ink, hoping that ultimately only the words of the manuscript would be left. It didn’t work.

So yes, Michelangelo gave us a powerful metaphor, and modern-day psychology has named a phenomenon after him. The idea is that within each of you, a better version of yourself awaits release. The true, ideal, or authentic self depends on help from the outside just as the statues of David and Moses did. The people who can help release your better self are those who are close to you and who care about you. They want to help you to be the best you can be on your own terms, not theirs. Thus, the Michelangelo phenomenon is different from the better known Pygmalion effect, which occurs when a more powerful and persistent person shapes another, less developed, person according to his or her own design. For the Michelangelo maneuver to succeed it is crucial that the other person recognizes the goals, ideals, and plans you have for yourself, and that he or she accepts a facilitating role. In other words, the supportive other affirms your version of your better self perceptually (recognition) and then behaviorally (facilitation). In turn, this affirmation enables you to grow by moving toward your individual psychological goals.

A successful move towards personal goals is a reflection of psychological growth. A person benefiting from the Michelangelo phenomenon would become more authentic. In a recent study (in Self & Identity, forthcoming), we measured the three components of the Michelangelo phenomenon and authenticity as a fourth. In other words, we tested if the sequence of perceptual affirmation, behavioral affirmation, move towards a goal, and authenticity, can be modeled as a causal chain, in which any positive change depends on a positive change at the preceding stage. The findings supported this idea.

The affirmation of a person, which leads to his or her personal growth, lies at the heart of humanistic psychology, and this is where Carl Rogers comes in. Like the Renaissance sculptor, Rogers believed in the pre-existence of a beautiful inner form that is vulnerable and easily obscured, but that can be liberated and revealed under the right circumstances. To Rogers, a person’s inner self is not necessarily perfect in the sense that it comprises the top 10 socially desirable character traits; it is perfect in the sense that it is true to its own potential rather than the designs of others; it is not a façade, a sham, a role, or a “persona” in the original Roman sense (i.e., a mask). In other words, the perfect self is authentic. It is this self that can be accepted and loved for its own sake. It is not “preferred” or “desired” because it has the highest value as a commodity. Yet, the authentic self requires an interpersonal context in order to flourish. Whereas a façade is a false front erected to deceive others or to protect the self, the authentic self requires a benevolent (“congruent” in Rogers’s terminology) other as an astute observer and caring participant.

Humans are inescapably social creatures. On a bedrock of self-interest, most humans manage to be caring, benevolent, and fair, at least some of the time. Taking on the robe of Michelangelo and helping others to fulfill their own potential is an eminently altruistic stance that does not even come at a high cost. So let’s do more of it.

Note. To illustrate how the stages of the Michelangelo phenomenon and four facets of authenticity are measured, consider the selection of representative items below.

Perceptual affirmation:
“My partner sees me as the person I ideally would like to be.”
Behavioral affirmation:
“My partner behaves as though I posses the traits that I believe most desirable.”
Move towards goal:
[After participant lists 4 characteristics of his or her ideal self] Think about your relationship with your partner. To what degree have you changed with respect to Characteristic #1 as a result of being involved with your partner?

“I understand why I believe the things I do about myself.”

Authenticity 2 (unbiased processing):”I am very uncomfortable objectively considering my limitations and shortcomings.” (reverse coded)
Authenticity 3 (relational orientation):
“I want people with whom I am close to understand my weaknesses.”
Authenticity 4 (behavior):
“I frequently pretend to enjoy something when in actuality I really don’t.” (reverse coded)