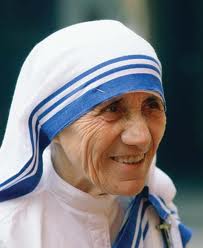 Example of Teaching
“I have found the paradox, that if you love until it hurts, there can be no more hurt, only more love.”

Mother Teresa: Come Be My Light: The Private Writings of the Saint of Calcutta

Blessed Teresa of Calcutta, born Agnes Gonxha Bojaxhiu and commonly known as Mother Teresa (26 August 1910 – 5 September 1997), was an ethnic Albanian, Indian Roman Catholic nun. “By blood, I am Albanian. By citizenship, an Indian. By faith, I am a Catholic nun. As to my calling, I belong to the world. As to my heart, I belong entirely to the Heart of Jesus.” In late 2003, she was beatified, the third step toward possible sainthood. A second miracle credited to Mother Teresa is required before she can be recognised as a saint by the Catholic church.

Mother Teresa founded the Missionaries of Charity, a Roman Catholic religious congregation, which in 2012 consisted of over 4,500 sisters and is active in 133 countries. Members of the order must adhere to the vows of chastity, poverty and obedience, and the fourth vow, to give “Wholehearted and Free service to the poorest of the poor”. The Missionaries of Charity at the time of her death had 610 missions in 123 countries including hospices and homes for people with HIV/AIDS, leprosy and tuberculosis; soup kitchens; children’s and family counselling programmes; orphanages; and schools.

For over 45 years, she ministered to the poor, sick, orphaned, and dying, while guiding the Missionaries of Charity’s expansion, first throughout India and then in other countries. Her beatification by Pope John Paul II following her death gave her the title “Blessed Teresa of Calcutta”.

She was the recipient of numerous honours including the 1979 Nobel Peace Prize. She refused the conventional ceremonial banquet given to laureates, and asked that the $192,000 funds be given to the poor in India. Her awards include the first Pope John XXIII Peace Prize, the Philippines-based Ramon Magsaysay Award, the Pacem in Terris Award, an honorary Companion of the Order of Australia, the Order of Merit from both the United Kingdom and the United States, Albania’s Golden Honour of the Nation, honorary degrees, the Balzan Prize, and the Albert Schweitzer International Prize among many others.

Mother Teresa stated that earthly rewards were important only if they helped her help the world’s needy. When Mother Teresa received the Nobel Peace Prize, she was asked, “What can we do to promote world peace?” She answered “Go home and love your family.” In her Nobel Lecture, she said: “Around the world, not only in the poor countries, but I found the poverty of the West so much more difficult to remove. When I pick up a person from the street, hungry, I give him a plate of rice, a piece of bread, I have satisfied. I have removed that hunger. But a person that is shut out, that feels unwanted, unloved, terrified, the person that has been thrown out from society—that poverty is so hurtable and so much, and I find that very difficult.” She also singled out abortion as ‘the greatest destroyer of peace in the world’.
During her lifetime, Mother Teresa was named 18 times in the yearly Gallup’s most admired man and woman poll as one of the ten women around the world that Americans admired most. In 1999, a poll of Americans ranked her first in Gallup’s List of Most Widely Admired People of the 20th Century. In that survey, she out-polled all other volunteered answers by a wide margin, and was in first place in all major demographic categories except the very young.

Something Beautiful for God – Mother Teresa

A Powerful Lesson From Mother Teresa

What Made Mother Teresa So Special, Part I

The Testament of Mother Teresa

The Wisdom of Mother Teresa

Mother Teresa: How to Love God