Polishing Away the Anger

by Ram Dass from Miracles of Love: Stories about Neem Karoli Baba: Once I found myself becoming very angry while at Maharaji’s temple. Most of the anger was directed against my fellow Western devotees. 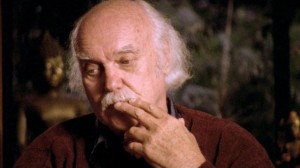 Although there were perhaps some justifiable reasons for the anger, the fever pitch to which it had risen at the end of the two weeks was surprising, even to me. It was at that point that I walked to the temple and arrived late.

All the Westerners were sitting in the usual row on the porch, on the opposite side of the ashram courtyard from where Maharaji was sitting. From here they could watch him from a distance while they were taking prasad (lunch in this case). When I arrived and sat down, one of the Westerners brought over a leaf plate of food that had been saved for me. And at that moment the fury broke and I took the leaf plate and threw it. From across the courtyard, Maharaji watched.

Almost immediately I was summoned to his presence, and I crossed the yard and knelt before him.

“Something troubling you?” he asked.

He fed me the milk and asked me if I loved him. I assured him that I did. Then, when I had composed myself sufficiently, he leaned up close and said, “I told you to love everybody.”

“Yes, Maharaji, but you also told me to tell the truth. And the truth is that I just don’t love everybody.” Then Maharaji came even closer, so that we were practically nose to nose, and he said, “Love everyone and tell the truth.”

The way he said it left no doubt about the way it was to be. For a fleeting moment I had an image of a casket – apparently symbolic of my death – but it was shaped in a way that was unlike my body. It seemed representational of this conversation in which, in effect, I was protesting that, who I thought I was could not love everyone and tell the truth, and Maharaji was saying, “When you finish being who you think you are, this is who you will be. When you die you will be reborn to love everyone and tell the truth.”

Then he said, “Sometimes the most anger reflects the strongest love.”

Looking across the yard at those Westerners, toward all of whom I self-righteously felt anger, I saw suddenly that the anger was at one level, while immediately beneath that, at a slightly deeper level, was incredible love – two planes of relationship in which a person might say, “I love you but I don’t like you.” And if Maharaji’s instructions were to be carried out – and there was no doubt that they were, for he was my guru for better or worse – the anger would have to be given up to make way for the love.

Then Maharaji offered me a bargain: “You must polish the mirror free of anger to see God. If you give up a little anger each day, I will help you.” This seemed to be a deal that was more than fair. I readily accepted. And he’s been true to his end of the bargain.

It is now twenty-three years since that day. The impurities haven’t fallen away as quickly as I would have liked, but slowly, verrrry slowly, the mango boon is coming to pass.