by Dennis Hevisi: Sri Daya Mata, who for more than five decades was the leader of one of the most influential Hindu groups in the United States and an ardent advocate of the healing power of meditation, died on Tuesday at the group’s retreat for nuns in Los Angeles. She was 96. 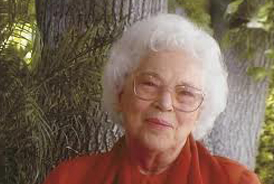 Sri Daya Mata, right, in 1939 with Paramahansa Yogananda, the founder of the Self-Realization Fellowship in Los Angeles.

Her death was confirmed by Lauren Landress, a spokeswoman for the group, the Self-Realization Fellowship/Yogoda Satsanga Society of India, which is based in what once was an elegant hotel on Mount Washington in Los Angeles.

From 1955 until her death, Sri Daya Mata — her name means “true mother of compassion” in Sanskrit — was the society’s president and spiritual leader. In her flowing ocher sari, she presided over an organization that now has more than 600 temples, centers and retreats in 60 countries, about half of them in the United States. Ms. Landress estimated that the society had “hundreds of thousands” of followers, but said she could not be more specific.

The society, whose monks and nuns adopt Indian names, teaches that there is a unifying truth behind all religious experience, and the group encourages its members to honor their roots in other faiths. Most members follow avegetarian diet, practice yoga, chant and meditate.

Meditation, Sri Daya Mata said, is a universal balm: “If we turn our consciousness within, in deep meditation, communing with God even a little bit every day, we begin gradually to experience that love which is our real nature.

“Feeling love within ourselves, it is very easy to give it to others.”

The Self-Realization Fellowship was founded in 1920 by the Indian yoga master Paramahansa Yogananda soon after he arrived in the United States as a delegate to the International Congress of Religious Liberals in Boston. He became well known as the author of “Autobiography of a Yogi,” which was first published in 1946.

Catherine Wessinger, a professor of the history of religions at Loyola University New Orleans, said on Thursday that Sri Yogananda was “the most significant teacher to popularize Hindu ideas and practices in the United States after the initial one, Swami Vivekananda,” who came to the United States in 1893.

“Of course, in the 1960s, numerous gurus immigrated to the United States,” Dr. Wessinger said, “but the S.R.F. remains influential.”

Sri Daya Mata, who was born Faye Wright in Salt Lake City on Jan. 31, 1914, was a daughter of Clarence and Rachel Wright, who were Mormons. Her grandfather Abraham Reister Wright was an architect of the Mormon Tabernacle.

Faye was 15 when she picked up a copy of the Bhagavad-Gita, a sacred Hindu scripture. Two years later, in 1931, she attended a lecture by Sri Yogananda in Salt Lake City.

Soon after, with her mother’s blessing, she moved to Los Angeles and joined the society. She took her vows in 1932, becoming one of the first nuns of the Self-Realization Fellowship order. Her mother, sister and two brothers later became members of the society as well.

For more than 20 years, Sri Daya Mata was one of Sri Yogananda’s closest disciples, serving as his secretary and helping compile the detailed instructions on yoga meditation that the society distributed by mail order.

In 1955, three years after Sri Yogananda died, she succeeded the Rajarsi Janakananda as president of the society. As a spiritual successor to Sri Yogananda, she supervised the training of disciples who resided in ashrams around the world and the administration of the society’s humanitarian services.

Besides its headquarters, the society owns a 10-acre sanctuary in the Pacific Palisades, near Malibu, Calif., where a temple crowned by a golden lotus was built in 1966 under Sri Daya Mata’s guidance. Followers come from around the country to meditate.

J. Gordon Melton, director of the Institute for the Study of American Religion in Santa Barbara, Calif., who has compiled a census of Hindu groups in the United States, said that while the Self-Realization Fellowship’s “strength still is in Southern California, Daya Mata built a following that it is now a much more substantial national movement.”