by Anada Giri In the summer of 2009, I was visiting the city of Los Angeles to speak at a conference. 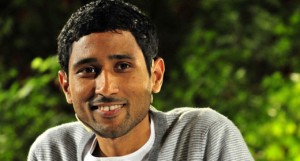 A week prior to the event myself, along with Krishna (founder of One World Academy), his wife Preetha and their 6 year old daughter Lokaa, were visiting a store for some grocery shopping. The name of the store was Bristol farms and they sold mostly organic foods.

We had finished our shopping and were gently pushing our nearly full cart to the parking lot with Lokaa sitting on top. As we walked we saw three young children, two girls and a boy, running towards us. They looked between 9 and 11 years old. The children ran up to us and volunteered to push our cart for us in exchange for a small donation. We were surprised at their boldness and also curious to find out why they needed this money so desperately that they were willing to chase people in the parking lots to get it. We were deeply moved with their courage and innocence.

Six year old Lokaa kept shouting “Mama, Mama, please help them”, and we certainly wanted to support them, but before we did that we wanted to know why they needed the money. We were thinking that maybe it was for a school project or else they were trying to raise funds for their Halloween costumes, however we were totally wrong!

When Krishna enquired with them about the reason for this “parking lot fund raiser”, almost in one voice they replied saying, “we are on a mission!”

What could the mission of nine year olds be we asked ourselves, and so we asked them again, in a more humorous tone, “what is your mission?”

One of the girls took charge and very briskly responded by saying, “we want to end poverty in East Africa.”

At this point we could no more be distracted by the activity in the parking lot nor could we afford to be half attentive. What these children began sharing with us was too noble for us not to take it seriously. We were totally present with them as the little girl in charge shared with us the following touching story.

“A few weeks ago myself, along with my friends, were browsing the Internet and we saw some images that disturbed us very deeply. We came across pictures of young children who looked very sick and malnourished. They looked so skinny, like they were almost dead. We looked at ourselves and wondered, how come we are so healthy and fine looking while these children elsewhere appear so sick and weak.

We had to find out who these children were, as we felt compelled to do something to help them, so we started to browse more to learn about their situation.

What we discovered was that these images were of children in East Africa. Now that we knew where the children were we wanted to find a way to reach and support them so as to help improve their conditions. We searched further to find out if there were any organizations in our neighborhood that supported causes like hunger and poverty. Thank God we have the Internet because it allowed us to research for everything that we needed, all whilst sitting in our playroom and with just some clicking of keys on our MacBook.

We identified several organizations in our area and approached one of them to offer our services in support of their mission. They told us that any kind of help or support would be much appreciated and that we could donate clothes, donate food or raise money. We decided to raise some funds and in the process of doing so also bring greater awareness to people about the poor living conditions of so many throughout the world.

Now the challenge was how to go about raising this money. We had the passion to do it and we were very driven too but we still needed a good idea to help us achieve our mission. So we called for a meeting with our friends and started to brainstorm ideas until we arrived at a magical solution.

We had the brilliant idea to go to the grocery store at weekends, as this would surely be a good place to raise funds. Because no one is in a rush to leave they would have time to listen to our story and maybe even spare some change. And here we are today telling you our story and hoping that you will support our cause”.

The little girl continued; “Do not think that we are the only ones doing this. You will most likely find our friends in every grocery store in town, because today the town is ours, there is no escape for anyone and we will continue to trouble people every week until there is no more poverty in the world” she said, with a mischievous smile on her face.

Oh my goodness! Who are these children! Have we already entered the golden era! How could anyone not support them? We made our little contribution and also made a promise to tell their beautiful story to all our friends.

So here I am telling you this story and keeping the promise that we made to those three little angels.

It was very hard for us to leave them, but they would no longer waste their precious time by simply hanging around us. They had a mission to accomplish. They thanked us and ran away chasing another group of people in the parking lot, as they had to get to them before the groceries were loaded into the car. We wished them good luck as they disappeared and got into our car to drive home.

As we drove away we all carried within us such an incredible feeling in our hearts, as we were so touched. We felt very thankful and happy. It reaffirmed our belief that the world is moving in a great direction, that it is rapidly changing and changing for the better and that on this day we had witnessed “The New Global Citizen” in action!

If we were to look back at our world three decades ago, we may be quite surprised to find that there were very few people who thought and acted globally. There were many very good leaders, leaders who felt responsible for their people, their religion, their country or their nation, but very few leaders who felt responsible for the world at large; leaders who would consider and include the well being of the people of the world in their thoughts and actions.

Three decades later, we have even nine year olds and eleven year olds thinking and acting like true world leaders. And if you thought these kids were exceptions, you are mistaken. You will find them everywhere, in all cultures and in every continent of the world, for it is a fact that we have more world citizens today on our planet than in any other period of human history. There are millions of them and it is not just the children and youth that we are talking about, there are women and men from all age groups who think and act like global citizens.

How did this transformation happen in such a short period of time?

We are beginning to see glimpses of what we have been aspiring to achieve for so many centuries, that some may call universal brotherhood.

Who could have caused this transformation?

Could it be possible that today’s technology has influenced this shift in our perception?

We can connect to all of humanity without even having to leave our home. We can feel the pain of someone suffering from want of food and we can also feel the thrill of a whole nation having just won their first soccer world cup. We can feel what our humankind is feeling and all with one click on our computer.

This new technology has given birth to new friendships; inter-religious friendships, inter-racial friendships, inter-cultural friendships and international friendships. The Internet is slowly but surely erasing all boundaries that cause division and conflict. It has inspired a new sense of togetherness and a desire to serve and support our fellow beings who share this planet with us.

This new technology has resulted in a “NEW EXPANDED SELF” giving birth to the “NEW GLOBAL CITIZEN”.

Just as every form of the Arts and Sciences can have their negatives, so too does this technology have it’s negatives, but the profound impact of the Internet on human consciousness cannot be ignored. For those of us who believe that technology is not the right path, maybe it is time for a change in perspective. Maybe technology is God’s plan for a better, more beautiful world.