The Secret of Freedom

by Earl Nightingale: Every once in a while the whole world looks like it’s just about to end.  It may seem as though we’re living in somebody’s idea of a big, unfunny joke.  And just about the time things look the darkest, a great mind comes along and gets us back on the right track again. 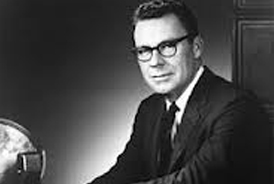 All of a sudden, we have our ambition back, we know the excitement of working toward a future that looks bright with hope again.  These great minds are priceless, and there’s never been a time in history when there weren’t enough of them to keep things in some kind of balance.

Great people come in all kinds and sizes, and in all sorts of occupations.  There have been scientists, inventors, philosophers, mathematicians, doctors, and  simple people in homespun cloth. There have been teachers and naturalists.  But they’ve all had one direct line to the title of Greatness.  Do you know what that was and is?  It’s the ability to see Truth.  The ability to cut through all the misleading, confusing and obscuring camouflage and see Truth that always must be shining somewhere in the dark.

On one of my flying trips, I got the chance to read Archibald MacLeish’s play, The Secret of Freedom. Here’s something you can’t read without getting a lump in your throat the size of a tennis ball, without feeling that stinging at the back of your eyes which tells you that you are in the presence of Truth and the clear shining hope and faith that goes with it.

What makes this play great is not that Mr. MacLeish comes up with the answer to Utopia, or springs some great new idea on us.  No, what makes the play great and what makes Archibald MacLeish great is that they take us back to the great living truths that lay behind what we enjoy today, and help us look forward to tomorrow.  They keep reminding us that the greatest idea the world has ever known is “Individual Liberty”, and, what’s just as important, that people will keep popping up to remind us of that fact and help us protect it.

Mr. MacLeish reminds us of the great Athenian statesman, Pericles, who stood on a battlefield, in the 5thcentury before Christ, and said “For you, now, it remains to rival what they have done . . . knowing the secret of happiness to be freedom . . . and the secret of freedom…courage”.

He reminds us of another great statesman, Abraham Lincoln, who stood on a battlefield 2,400 years later and said,  “We shall nobly save, or meanly lose, the last, best, hope of earth”.

Oliver Wendell Holmes once wrote “No man has earned the right to intellectual ambition until he has learned to lay his course by a star which he has never seen, to dig by the divining-rod for springs which he may never reach”.

The wonderful thing about the great truths we should live by is that they apply to anything.