The Story of Guru Nanak’s Birth

by Sukhmandir Khalsa: Outside the dwelling, dark clouds filled the sky obscuring the moon. A chill wind moaned drowning the sounds of the woman laboring inside to deliver her child. Daulatan, the midwife straightened and wiped her brow with the back of her hand. She bent over Tripta Devi again and smoothed the damp curls back from her brow. 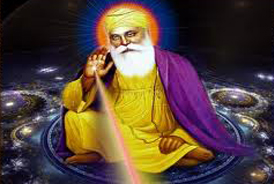 Soothing her with soft shushing sounds, she encouraged the young woman to push, thinking to herself that it wouldn’t be long. The infant slipped out all at once into her waiting hands. She turned him on his side to clear his airway. “Wah,” the babe took his first breath. She could swear he winked at her as she swaddled him, and tucked him in next to his mother. Kalu squatted next to his wife, his heart swelling with the pride of being father to a boy child. Nanaki cuddled close to her mother and new brother Nanak Dev. The infant Nanak gazed at his new family and smiled sagely.

Hardyal scribbled his calculations, checking the exact angles of the sun and moon. He pondered over the particulars of the birth of Kalu’s son as described to him by the midwife. She confided to him that the newborn Nanak had chucked wisely as though understanding great mysteries. He might have dismissed her declarations as a bid for attention had not the stars been so aligned. Readying himself, he visited the family. He pressed his palms together and bowed to the infant and then turned to the expectant family.

Kalu heard the astrologer proclaim his new son the beneficiary of a deeply spiritual disposition which would influence many over the course of his life, and that he would be respected by Muslims and Hindus alike. Swelling with importance, his brow wrinkled just a little. As a devout Hindu, he couldn’t be sure what the implication that his new son would recognize only one God might mean. He touched a bundle of fragrant herbs with a hot taper and fanned the curl of smoke towards the carved figures of his gods. Sprinkling a few grains of rice in thanks, he supposed time would tell.