What Made Mother Teresa So Special, Part I

by Father Brian Kolodiejchuk: How was a frail little woman able to become one of the most outstanding figures of the 20th century, dedicating herself to the “poorest of the poor”? 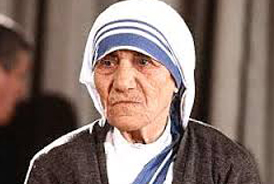 For the answer to this and other questions, ZENIT interviewed Father Brian Kolodiejchuk, one of the three who began the priestly branch of the Missionaries of Charity and postulator of Mother Teresa’s cause of beatification, which will take place Oct. 19. This is the first of a three-part interview. Part 2 appears Sunday.

Q: Last Dec. 20, the decree of a miracle attributed to Mother Teresa was made public. So, five years and three months after her death, her beatification was announced. How was this possible in such a short time?

Father Kolodiejchuk: The primary reason for such a relatively short time was certainly the great reputation of sanctity that Mother Teresa enjoyed already in her lifetime. Many people considered her a saint, and even called her “a living saint.” This was the general opinion not only of the Catholic faithful, but also of people of different religions and even of agnostics.

The international media had followed her life and work with great interest. Many admired her charity and selfless love for the poor. She had become a symbol of love and compassion for the poorest of the poor.

At the time of her death, the Indian government paid her the great tribute of a state funeral, attended by a large number of world leaders. Many people from around the world watched the funeral on television. This was a wonderful tribute to Mother Teresa and her reputation of sanctity. But above all, she was mourned by the common people, the poor who had experienced her motherly love. They are the ones who most testify to her holiness.

As a consequence of this widespread and solid reputation of holiness, soon after Mother Teresa’s death the Congregation for Sainthood Causes [CCS] received an avalanche of requests that her cause of beatification and canonization already begin.

One of the first requests — and an essential one — came in October 1997 when the archbishop of Calcutta, Henry D’Souza, petitioned the CCS for a dispensation from the norm requiring a waiting period of five years after death before the diocesan Inquiry into the Life, Virtues, and Reputation of Sanctity could be initiated.

Fourteen months later, on Dec. 12, 1998, the CCS granted a dispensation from the norm and the diocesan inquiry for Mother Teresa was able to begin.

After the preliminary steps were completed, the diocesan inquiry began in Calcutta on July 26, 1999. With this, the period of gathering information began: interviews with eyewitnesses and review of documents and materials pertaining to the life and work of Mother Teresa. The closing session of the diocesan inquiry was held on Aug. 15, 2001. The Acts of the Diocesan Inquiry consist of 80 volumes, each approximately 450 pages. This material was subsequently submitted to the CCS in Rome.

Even though an exemption was made for the period of waiting, no exemption was made from the formal process itself or from any of its steps. A “Position on the Virtues,” or “positio,” was prepared under the direction of the relator, Monsignor José Luis Gutiérrez Gómez.

This, of course, required a lot of work and effort. Serious and detailed study of Mother Teresa’s life and work was done. It was an engaging and gratifying work since many detailed discoveries were made. In April 2002 the “position” was completed and given to the Congregation for Sainthood Causes for study.

All this work was made possible because of the dedicated effort of those working on the cause in Calcutta and in Rome and the generous assistance of many people. But even more important was God’s providence. We received the right help at the right moment and I can truly say that the hand of God was assisting us and guiding us along the way.

Q: Totally abandoned to God, Mother Teresa made the service to the poorest of the poor, the abandoned by all, the sick and dying her life. Pleasure, success, security and egoism are features of the present time. Why is the figure of the future blessed so much admired in the society in general?

What was most visible and attractive in Mother Teresa was a radical living of the Gospel message. What made her so admired and sought after was not so much her eloquence, since in fact her words were rather simple, but rather her “putting love into living action” that which Jesus taught.

A deep understanding and belief of the Gospel message had taken root in her, penetrating her being, and this was reflected in her living. She did not allow herself compromises and in this her determination and her courage were admirable. Even her critics were impressed by this.

Her life and work gave authenticity to her words and this was what people looked for in inviting her to deliver speeches or in choosing her as a recipient of a variety of awards and honors. Even in a society that is so secular, radical Gospel living is still attractive.

One particularly important aspect of this attractiveness was Mother Teresa’s service to those most in need. Her compassion, care and effective service of those most in need — the last and the least, the unwanted and unloved — were the expression of a wholehearted and self-sacrificing love in answer to the special call she received in 1946 to quench Jesus’ thirst for love and souls.

In a time when the rejection of life is so common and people are abandoned because of indifference, Mother Teresa came as a messenger to every person she met: “God loves and wants you, he longs for you, he thirsts for you.” She lived this message by embracing the poorest, the most abandoned, the most unloved, those whom no one else wanted and for whom no one else had time. When with her, everyone would feel specially loved.

That Mother Teresa engendered the admiration she did indicates that people still seek the spiritual. People, often without knowing it, are thirsting for God. As the Holy Father says in his apostolic letter “Novo Millennio Ineunte”: “Holiness, a message that convinces without the need for words, is the living reflection of the face of Christ.” At the deepest level, it was Mother Teresa’s holiness that attracted people to her, and it was his face that they admired in her.