Yeshe Tsogyal (777-837 A.D.) was born in the princely Kharchen family. Her father’s name was Namkhai Yeshe and her mother was called Gewa Bum. When she was born, a spring of fresh water spontaneously burst from the ground and formed a sizable pond next to her house. This pond came to be known as “Lha-tsho”, the Divine Lake. Later the spot would become a famous pilgrimage site for generations of devotees. 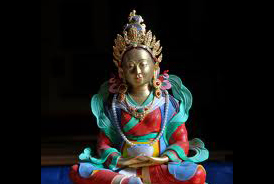 Life was not easy for Yeshe Tsogyal. She was brutally raped by her first suitor and fought over by her second. When she fled from the latter, she was taken and placed in the King’s harem. Later the Dharma King Trisong Deutsan offered her as a consort to his guru, the Lord Padmasambhava.

Guru Padmasambhava set her free and she became his disciple. Only then did she begin to discover happiness in her life. That was in the year 794 A.D., when Yeshe Tsogyal was sixteen years old. When she received Empowerment her flower fell on the sacred mandala of Vajrakilaya and through practicing the appropriate sadhana she rapidly gained accomplishment. She then received all of Guru Padmasambhava’s teachings and became his spiritual heir.

Since Yeshe Tsogyal possessed a phenomenal photographic memory, it was possible for her to memorize vast numbers of texts without the slightest difficulty. Thus the entire Khandro Nying-thig teachings were handed into her care.

The Princess Yeshe Tsogyal traveled to Nepal in 795 A.D., where she met her soul-mate and mystical consort, Atsara Sahle. The Yogini and her consort traveled to various hermit caves, where they practiced their Sadhana with great diligence.

Yeshe Tsogyal would seem to have been a stronger personality than her mate. She had suffered extensively in her youth. She had great determination to attain spiritual awakening. Atsara Sahle was from the valley of Kathmandu, where the biting cold of Tibet in winter is never experienced. It was therefore more difficult for him, when they lived as hermits in the high mountains. Yet both struggled as best they were able on the hard path of spiritual endeavor.

There came a period when, while living alone in the wintry cave of Nering Senge, her mate having retreated to warmer climes, that Yeshe Tsogyal began to face all the demons of her mind. Visions rose up before her in the process of her meditations, full of hideous and terrifying intensity. Hordes of phantoms advanced upon her: fearful, seductive, malign, and evil. With these, the product of her own traumatic passions, she wrestled, while remaining unmovable in her vajra-like samadhi, the immutable poise of impartial contemplation. For days the onslaught continued, until finally she was left in peace. This was the trial of her final spiritual catharsis.

Afterwards, at the lonely cave of Paro Taktsang in the highlands of Bhutan, with her consort Atsara Sahle, she disciplined herself through vigorous fasts, long meditation, and the spiritual practice known as karmamudra, so as to blend the refined positive and negative seed essences (bindus) of her heart nerve-plexus (chakra) and branch nervous-systems (nadi), from whence the five major and five secondary bio-energies (vahyu) of the living body derive, so as to crystallizing in the whole of her presence the basis of an inner vajra-body. This rigorous blending together of refined nerve substance (the white and red seed essences), and the undoing of the last psychological knots of the heart centre, pertains to the final stage for winning Buddhahood in a single lifetime. Yeshe Tsogyal’s retreat at Paro Taktsang would be the last austerity practiced for her own benefit.

In Paro Taktsang after pursuing her goal with incredible diligence, Yeshe Tsogyal attained the level of a world-encompassing Insight holder. Thus she gained the basic stages of Enlightenment.

Later she traveled all over Tibet with her Precious Guru, Padmasambhava, blessing particular locations and depositing Treasure texts (terma) for the benefit of future mystics.

She went into an isolated Meditation Retreat in 796 and did not come out until 805, after her great Guru had already left Tibet, but when she did finally emerge it was as a fully Enlightened Buddha. Possibly in 837, but perhaps later, she transcended worldly existence, ascending bodily to the manifest pure field dimension of the Sacred Copper-Color Mountain, the luminous sphere of her Guru, the Lord Padmasambhava.