The growing power of Athens had frightened other Greek states for years before the Peloponnesian War broke out in 431. During the war, Pericles died in the plague of Athens (429); fortunes of war varied until a truce was made in 421, but this was never very stable and in 415 Athens was persuaded by Alcibiades, a pupil of the Athenian teacher, Socrates, to send a huge force to Sicily in an attempt to take over some of the cities there. This expedition was destroyed in 413. 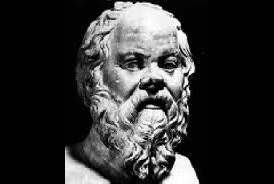 Nevertheless Athens continued the war. In 411 an oligarchy (“rule by a few”) was instituted in Athens in an attempt to secure financial support from Persia, but this did not work out and the democracy was soon restored. In 405 the last Athenian fleet was destroyed in the battle of Aegospotami by a Spartan commander, and the city was besieged and forced to surrender in 404. Sparta set up an oligarchy of Athenian nobles (among them Critias, a former associate of Socrates and a relative of Plato), which because of its brutality became known as the Thirty Tyrants. By 403 democracy was once again restored. Socrates was brought to trial and executed in 399 Socrates (469-399), despite his foundational place in the history of ideas, actually wrote nothing. Most of our knowledge of him comes from the works of Plato (427-347), and since Plato had other concerns in mind than simple historical accuracy it is usually impossible to determine how much of his thinking actually derives from Socrates.

The most accurate of Plato’s writings on Socrates is probably the The Apology. It is Plato’s account of Socrates’s defence at his trial in 399 BC (the word “apology” comes from the Greek word for “defence-speech” and does not mean what we would think of as an apology). It is clear, however, that Plato dressed up Socrates’s speech to turn it into a justification for Socrates’s life and his death. In it, Plato outlines some of Socrates’s most famous philosophical ideas: the necessity of doing what one thinks is right even in the face of universal opposition, and the need to pursue knowledge even when opposed  Socrates wrote nothing because he felt that knowledge was a living, interactive thing. Socrates’ method of philosophical inquiry consisted in questioning people on the positions they asserted and working them through questions into a contradiction, thus proving to them that their original assertion was wrong. Socrates himself never takes a position; in The Apology he radically and sceptically claims to know nothing at all except that he knows nothing. Socrates and Plato refer to this method of questioning as elenchus , which means something like “cross-examination” The Socratic elenchus eventually gave rise to dialectic, the idea that truth needs to be pursued by modifying one’s position through questioning and conflict with opposing ideas. It is this idea of the truth being pursued, rather than discovered, that characterizes Socratic thought and much of our world view today. The Western notion of dialectic is somewhat Socratic in nature in that it is conceived of as an ongoing process. Although Socrates in The Apology claims to have discovered no other truth than that he knows no truth, the Socrates of Plato’s other earlier dialogues is of the opinion that truth is somehow attainable through this process of elenchus .

The Athenians, with the exception of Plato, thought of Socrates as a Sophist, a designation he seems to have bitterly resented. He was, however, very similar in thought to the Sophists. Like the Sophists, he was unconcerned with physical or metaphysical questions; the issue of primary importance was ethics, living a good life. He appeared to be a sophist because he seems to tear down every ethical position he’s confronted with; he never offers alternatives after he’s torn down other people’s ideas.

He doesn’t seem to be a radical sceptic, though. Scholars generally believe that the Socratic paradox is actually Socratic rather than an invention of Plato. The one positive statement that Socrates seems to have made is a definition of virtue (areté): “virtue is knowledge.” If one knows the good, one will always do the good. It follows, then, that anyone who does anything wrong doesn’t really know what the good is. This, for Socrates, justifies tearing down people’s moral positions, for if they have the wrong ideas about virtue, morality, love, or any other ethical idea, they can’t be trusted to do the right thing