by Christopher Ryan: I was recently asked to write a series of profiles of fascinating people and events from the 60s and 70s for a Spanish magzine called Cañamo. Because the various cultural revolutions that swept through the U.S. and the rest of Europe never made it past the dictatorship in control of Spain, the editors asked me to write about some worthy figures the Spanish might not know of. Here’s the third article, about Timothy Leary. 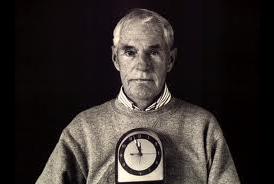 Timothy Leary’s first wife must have thought she was being ironic when she decided to kill herself on the morning of his 35th birthday. Of all the awful birthday gifts ever received, this must take the cake, as it were. In the following four months, Leary’s hair went gray. But looking back on his life as a whole, this tragedy does indeed seem to have been some kind of very bitter gift that sprang Leary out of the stultifyingly conventional 1950s life he’d been living (the same life that had propelled his wife toward depression and suicide, perhaps?). For Leary, it had been an utterly a false existence.

Timothy Leary was born a rebel and died a rebel, but for years in between he tried hard to toe the line and be “normal” before this horrible birthday present freed him to dance his way into history, barefoot and with flowers in his prematurely gray hair.

As a young man cursed with too little discipline and too much enthusiasm for women, Leary had bounced around in various universities and military institutions. Eventually, he found a place working at an army psychological hospital in Pennsylvania during World War II. After the war, he finished his doctoral studies (in psychology) at Berkeley, near San Francisco, California, and then began teaching there. This is where he constructed the conventional middle-class life that shattered into a million pieces on his 35th birthday, in 1955. He’d already published important research and a book on personality assessment that is still being used today.

In the aftermath of his wife’s death, he took his two young children and left for Spain. After spending a few years in Europe, he was offered a position at Harvard due to the behind the scenes string pulling by a friend who wanted to lure Leary back to the academic world. But that Dr. Leary had died in some sense, and the new version was utterly fearless. This made him a wild and exciting character. He was a bomb waiting for a spark.

He found the spark in 1960, on a vacation in Mexico when he was offered the chance to try one of the mysterious magical mushrooms that had recently been discussed in an article in Life magazine. At first, Leary was skeptical. But looking back on the experience, he told novelist Arthur Koestler that he’d “learned more in those six hours than in the previous sixteen years!” He’d “lost the mental machinery which slices the world up into abstractions and concepts… the emotional machinery that causes us to load life with our own ambitions and petty desires.” In other words, he’d lost precisely those things that make one a successful professor at Harvard.

Leary’s earlier work at Berkeley had led him to believe that the only route to true psychological cure lay in authentic insight into the nature of one’s self. With psilocybin mushrooms in hand, he now felt that he had found a way to bring this insight to his patients (as well as friends, colleagues, students, etc.) quickly and easily. Leary exploded into action.

The rest of the story is pretty well-known: Professor Leary distributing psilocybin and later, LSD, to everyone he could find who might be interested in trying it – including undergraduate students at Harvard. This led the university to ask him to leave (although still technically legal in the late 1950s and early 1960s, giving LSD to students was considered extremely unethical). By this time, the cultural revolutions of the time were in full swing, and Leary was becoming one of the principle intellectual gurus of the hippie movement. Leary even briefly ran for governor of California (against Ronald Reagan, no less!). John Lennon wrote the song, “Come Together” to be Leary’s political theme song: (“He say, ‘I know you. You know me. One thing I can tell you is you got to be free.”) His gubernatorial campaign was abandoned when Leary was convicted of possession of marijuana and sent to a prison from which he later escaped.

Until then, he’d been standing up in front of thousands at anti-war protesters, telling them to, “turn on (take LSD), tune in (get the message) and drop out (leave your normal life behind).”

This was, after all, exactly what he’d done.