by Tara Yoga Centre: Sarada Devi was today Mother Theresa. She was filled with compassion and love and lived to ease the suffering and pain of people around her. Leading a strict life in austerity, she learned to love all. 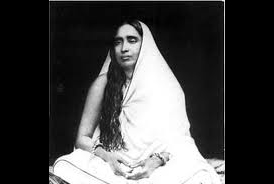 Teachings of the sacred mother:

“After his death, Sri Ramakrishna let me manifest the aspect of the divine Mother in the world.”
“I will not be able to turn my back on no one who will call me “Mother”.”
“If my son plays in the dirt or in mud, I am the one who has to clean all the dirt from his body and keep him into my arms.”
“The purpose in life is the achievement of the divine state as remained absorbed in the contemplation of the Divine.”

“Only God is real, and everything else is false.”

“How can people be divided in castes? Children are all equal.”
“Man should desire only the lack of desires, because desire itself is the root of all sufferings. But you can pray for abnegation and detachment. These cannot be seen as desires.”
“Love is our force. Through love, the family of the Master took shape.”
“If you desire peace, do not look for the mistakes of the others. Look for your own mistakes instead. Learn to manifest yourself, for the world to be yours. No one is a stranger, my child. The whole world is yours.”
“The purpose of a person is reached only when she/he can offer joy to someone else.”

The sacred mother was born on the 22nd of December 1853, in a village from West Bengal, called Jayrambati. Her name was Thakurmani but later she was known as Saradamani. Her first years were filled with simplicity spent in meditation and pray. Born in a family of humble and very pious people, she was raised as a simple girl from the countryside, only attending school for a short time, because she had lot of housework to do as well as helping at the field work.

Sarada had the belief that her destiny was to serve humanity. As a child she helped her mother to cook and took care of her sister and younger brothers. One year, in the reaping season, the rice field was destroyed by locusts. She went on the whole field and gathered the remaining grains and offered them to the farmers for food. Many beggars came to her door, and together with her father she would offer them boiled rice.

Even as a child Sarada displayed real skills for meditation. Also, instead of dolls or any other specific toys for children of her age, the girl preferred representations from clay of some gods, like Lakshmi or Kali, to whom she would consecrate flowers and leaves.

Sent by the Divine Providence

According to the prevailing custom in India, Saradamani was engaged ever since she was just a child. She barely was six years old, when her parents took her to the man who will be her husband. It was Sri Ramakrishna who was to reach the age of 23. Passing through a phase of divine “madness”, he was completely detached from food, sleep and any other physical necessities, being absorbed day and night in meditation and praying.

Because people around him labeled him as crazy, his relatives suggested to get him a wife, for him to get back to the normal mental state. Because the parents of Ramakrishna were poor, the only possible bride was Sarada, which was only six. After the wedding, she returned to her parents, being too young to live with her husband.

Sarada has spent the following years in Jayrambaty. Meantime, the rumor that her husband had gone mad was spread, and the villagers started to consider her as the wife of the “mad man”. She decided to visit Dakshineswar (where Sri Ramakrishna was found as a priest in the temple of Kali) to see the situation with her own eyes. Until that moment, Ramakrishna had dedicated his whole life to the spiritual search and lived as a monk. Still he received Sarada with much love feeling that she was sent to him by the Divine Providence.

After helping her to recover from the disease she caught on the road, Sri Ramakrishna asked her to come to stimulate him towards an earthly life. In no hesitation she answered: “No, I am here to help you reach the goal you chose”, which – as she well knew – meant the road of complete renunciation at all earthly connections for the love of God. Because of that, instead of looking for conjugal fulfillment, she became the first disciple of her husband, who adored her back as Shodashi (an aspect of the Divine Mother).

The privilege of having Ramakrishna as a Master

She was by Ramakrishna and his disciples for many years. After he died, she continued his spiritual mission, being a guide to those who sincerely followed the spiritual path. Sarada Devi was for Ramakrishna a spiritual friend, a devoted wife, disciple and their relationship was cast all this time.

The state of happiness and inner peace were in always there that no outer obstacle could affect it. She was an embodiment of purity. She never lost the communion with God, whom she described to be in her heart, although she was involved in different activities.

Her husband initiated her in many spiritual disciplines, he taught her to adore the Divine Cosmic Mother. They saw God in themselves and in each other. Sri Ramakrishna gave her the initiation in important mantras and trained her to spiritually guide those pursuing her help. Sarada Devi considered herself as the humble disciple of her Master, and this thing represented for her the supreme privilege and the highest happiness that she could live.

Immediately after the death of her husband in 1886, Sri Sarada Devi started a pilgrimage in the North of India. For a period of time she lived in Vrindayan, where she reached the highest state of consciousness called Nirvikalpa Samadhi and then her role as a guru truly started.

On her way back, Sri Sarada Devi went to Kamarpukur, where she met stubborn hostility from the villagers. Because she had no money, she had to work the soil and plant some vegetables. When the disciples of Sri Ramakrishna have heard about her tough situation, they invited her to Calcutta. There she became known as the Sacred Mother and offered spiritual guidance to many people. She was remarkable by her maternal tenderness and hospitality, by her gift of healing, the help she permanently gave to her disciples.

In 1909 Sri Sarada Devi moved in what is now “The house of the Sacred Mother from Calcutta” and lived there for the following 11 years with other sacred women. Her way of being, natural and spontaneous made everyone see her as a child, even though she was aged.

The spiritual teachings of this great prophet woman are a window to the beauty of her soul. ”As the clouds are spread by the wind, so the pleasure for the material pleasures will be banished by uttering the name of God” she says.

In 1919 Sarada Devi fell ill with black fever and even though she had great pains she continued to help her disciples. At the age of 67 she was dying. At the beginning of the year 1920, the fever went worse and she was moved in Calcutta for treatment where mobs of people came to receive her blessing.

Her final message towards a world troubled and torn by hatred, only two years after the ending of the First World War, was stated 5 days before she died: “If you want mental peace do not look for the mistakes of the others. Better look for your own. No one is a stranger, my children. The whole world is yours.”

Tuesday 21st of July, at 1.30 in the night she breathed hardly several times and entered a profound state of Samadhi (divine ecstasy) from which she never returned to the consciousness of the physical body. The entire body, destroyed after a long illness, suddenly relaxed, spreading a celestial light. Many of her disciples were deceived by this light, believing that for a period of time the Sacred Mother was still with them alive in this world.

Her entire life, Sarada looked at all people as her children, whether Hindu or Western. She attracted many disciples through the compassion and love that she expressed permanently. She stirred Ramakrishna’s disciples to bear his message abroad even in the other countries.

The lifeless body of the Saint, covered with wreaths of flowers was taken to Belur Math, over the Ganges and burnt on a sandal pile. In that place, a white temple was built in the memory of her life lived in perfect purity.

Another white temple was build in the birth town, at Jayrambati, on top of which a flag waves, reading a single word – “Ma”, reminding her words to her disciples, close or afar: “I am mother for the weak, as I am mother for the virtuous. Anytime you feel lost say to yourself with trust: “I do have a mother”.