Language and the Spirit of Language

by Rudolf Steiner: PEOPLE talk of the ‘spirit of a language,’ but it could hardly be said that there are many at the present day for whom the conception, so expressed, presents any very clear picture to the mind’s eye. 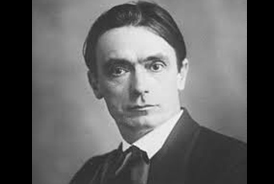 What they mean when they use these words, are general characteristic peculiarities in the formation of words and sounds, in the turn of sentences and the handling of imagery. Whatever ‘spirituality’ there may be exists in their minds alone and never goes beyond abstractions. As for anything worthy of the name of ‘Spirit’ — they never get so far as that.

There are, however, two ways we can take to find the ‘Spirit’ of language to-day in all its living force. One of these ways is discovered by the soul which pushes on beyond mere conceptual thinking to that seeing which reveals the life and being of things. This kind of sight is an inner experience, an inward realisation of a spiritual actuality which must not be confounded with any vague, mystic sensation of a general ‘something.’ It is an actuality that contains nothing sensibly perceptible, but is no less ‘substantial’ in the spiritual sense.

In this kind of sight the seer travels far away from anything that can be expressed in language. What he sees cannot directly find its way to the lips. He clutches at words and has at once the feeling that the substance of his vision is changed. And — if he is bent on telling others about it — now begins his battle with the language. There is no possible form of speech that he does not press into his service to make a picture of what he has seen. Chimes and reminiscences of sounds, turns and twists of phrasing — he leaves nothing unexplored within the realms of the sayable. It is a hard inner struggle. And finally he has to say to himself: ‘This language is obstinate and has a will of its own. It says every conceivable thing in its own fashion. You will have to “give in” to it and humour it if you want it to accept your observations and receive them into itself.’ When we come to mould in speech what we have seen in spirit, then we find that we are dealing, not with a mass of soft wax that allows itself to be modeled into any form, but that we have to do with a living Spirit — the Spirit of language, the ‘Speech-Spirit.’

And, if it is honestly fought out in this manner, the battle may end excellently, indeed quite delightfully. For there comes a moment when we feel: ‘The Spirit of the language has laid hold of what I saw, has taken it up!’ The very words and turns of phrase in themselves take on something of a spiritual nature. They cease to be mere signs of what they usually ‘signify’ and slip into the very form of the thing seen. And then begins something like living intercourse with the Spirit of the language. The language takes on a personal quality. We feel that we can, as it were, discuss things with it, come to terms with it, as we should with another human being.

That is one way by which we may begin to feel the Spirit of language as a living being. We come to the second way, as a rule, by going through the first. But this is not necessary and we can quite well take it independently. We are well on this second path when we realise the original, concrete significance of words and idioms that have come in the present day to have a merely abstract character, and feel them in all their first, fresh, visualmeaning. We speak to-day, for instance, of an ‘inborn conviction,’ and say also that a conviction is ‘born in upon’ us. When we say in the present day, ‘I have an inborn conviction,’ we feel that the soul is already in the position of having laboured through to the inner verification of a thing. We have already learnt to feel ourselves detached from and ‘outside’ words.

But if we feel our way back into the word again, there rises up, as a similar process on different planes, the bringing-to-birth in the body and the bringing-to-birth in the soul. We have visibly before us what actually goes on in the soul when a conviction is ‘born in’ upon it. Take another instance. We say of a person who is affable and obliging, that he is ready to ‘fall in’ with others. Such expressions open up a wealth of inner life. A person who is prone to falling loses his balance, takes leave of his consciousness. And one who is ready to ‘fall in’ with others lets himself go for the time being, sinks his own consciousness in that of the other. He goes through inwardly, something not altogether remote from what is meant by ‘falling down in a faint.’

If we have a healthy sense for such things, if we feel them in a genuine, matter-of-fact way and are not merely playing a clever game with words or trying to find ingenious arguments for debatable theories, then we are driven finally to admit to ourselves that in the formation of language there does dwell Intelligence, Reason, Spirit. It is not a Spirit that has been put there first by man’s consciousness, but a Spirit that works in the subconsciousness and that man finds already there before him in the language as he learns it. And by this road man can really come to understand how their own spirit is a creation of the Spirit of language, of the ‘Speech-Spirit.’

On this road, the necessary conditions for getting to the Speech-Spirit are all there. The results of modern research contain everything requisite. And a great deal indeed has already been done. What is needed now is the conscious construction of a psychological science of language.

It is, however, not so much our concern here to point out whatever may be needed in this direction, as to indicate things that have a practical bearing on life. Anyone who considers such facts as the above and looks at them all round, must come to recognise that deeply hidden in language there is something that leads out and beyond it to something higher, something that is over language — to the Spirit itself. And this Spirit is not such that in the manifold languages it too can be manifold. It lives within them all as a single unity.

This spiritual unity amongst the languages is lost when they shed their first native, elemental vitality and are seized by the spirit of abstraction. Then comes the time when a man in speaking no longer has within him the Spirit, but only the verbal clothing of the Spirit. It is quite a different matter for a man’s soul whether, in using such expressions as the above, he feels within him the picture of what actually takes place between two people when one, let us say, ‘falls in’ with the other — or whether he only attaches to the phrase a conventional, abstract notion of the relation between them.

The more directly abstract men’s sense of language becomes, the more their souls become cut off from one another. Whatever is abstract is peculiar to the individual. He elaborates it for himself and lives in it as in something identified with his own private ego. This element of abstractedness, it is true, is only perfectly to be achieved in the world of concepts; but to some degree a very near approach to it has been made in words and phrases as actually sensed and used, especially in the languages of civilised nations.

But in the age in which we are now living, in face of all that tends towards the disseverance of men and peoples, every bond that links them together must be consciously fostered. For even between men who speak different tongues, that which divides them falls away when each sees and feels the visible reality imaged in his own form of speech. To awaken the slumbering ‘Speech-Spirit’ in each language should be an important element in all social education.

Anyone who turns his mind to such matters must find how much the prosecution of any movement — of what people to-day call social movements — depends on watching the living process of men’s souls, not on mere thinking and studying over external institutions and schemes. In face of the tendency towards the separation of peoples into languages it is one of the most urgent tasks of the times to create a counter-tide towards understanding each other.

There is much talk about ‘Humanism’ in these days, and of cultivating the genuine human principle common to all men. But, for any such tendency to become quite genuine, it needs to be applied seriously to the different concrete provinces of life. Think what it means for anyone who once has felt words and phrases invested with an absolutely distinct and visible reality. How much fuller and keener is the sense a man then has of his own human nature than when language is merely felt in its abstraction! We need not think, of course, when a person sees a picture and says, ‘How delicious!’ that, whilst looking at the picture, he must at the same time have a vision of his joints being loosened until he is in a state of such complete ‘delectation’ that he begins to feel as if his being were dissolved! Still, anyone who has once vividly felt the corresponding picture in his soul, will — when he speaks such words — have a quite different inner experience from one who has never known them as anything but an abstraction.