by Abhay Burande: Socrates is remembered as a Greek philosopher. He was born in 470 BC and died in 399 BC. He is regarded as a puzzling personality as although he did not write any information, he completely and permanently altered the method of understanding and thinking philosophy. He laid the basis of Western philosophy. Considering the standard of fifth-century Athens, his appearance, demeanor, personality, methods and views were exotic. 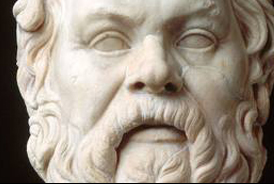 It is said that he had large, bulging, crab-like eyes, a flat and upturned nose and large, fleshly, ass-like lips. He grew long hair and roamed, without having a wash, barefooted. He looked arrogant and his boastful, conceited movements caused the enemy soldiers to maintain a safe distance. Plato, Xenophon and Aristophanes are the source of information regarding him. He had three sons named Lamprocles, Menexenus and Sophronisucs. It was declared that he was corrupting the young men in Athens and hence punished to death by consuming poisonous hemlock.

This is also called the Method of Elenchus or Socratic Debate. Plato was the first to describe it in the “Socratic dialogs”. This is a method of philosophical inquiry used for the assessment of key moral concepts. It is for this method that Socrates is considered as the father and originator of moral philosophy and western ethics. The method includes the following points:

Elenchos is said to be the prime technique of the Socratic method. Socrates used this technique to examine to nature of ethical concepts like virtue or justice. This was executed as follows:

the interlocutor accedes that these statements are contradictory to his statement
Socrates asserts that the interlocutor’s statement is false and its opposite is true
one assessment can cause a more refined assessment of the concept under debate
a series of elenchai may take place and culminate in a state of puzzlement
The Socratic method is to search for the assumptions that shape one’s sentiment. These assumptions are pondered over and their consistency with other beliefs is checked. A series of logical questions are asked with the objective of assisting a person to discover the individual opinions regarding some topic.

Socrates asserted that an individual must know himself in order to be wise. A life that has not been examined is not worth living. His philosophy can be learned through the writings of Plato. Socrates spoke that he was like a midwife. However, he attended the souls of men when they were in trouble. His art won when he could profoundly assess whether the thoughts that arose in the minds of the youth were false icons or true and noble. He had the opinion that just like midwives he was also barren. He was blamed that he asked questions for which he himself had no answer. He replied that he was not astute or had nothing to demonstrate that was the invention of his soul. However, those who would converse with him would necessarily gain something. Socrates also said that the youth belonging to the richer class accosted him of their own sweet will. They tried to ape him by examining others. There were many such rich youth who assumed that they knew some facts, but in fact knew very less or nothing. It so happened that the people examined by such rich youth rather than being angry with themselves showered their wrath on Socrates. So, he was titled as the “villainous misleader of the youth”. These people could not tell precisely how he was wrong. Only as they were large in number, they could affect loud slander.