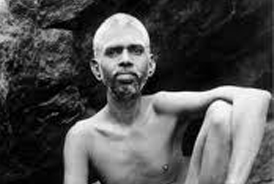 He could only have “what fell from the skies” (alms), and even then it must not come through a “fallen” Brahmin. Temples have no hold on the Hindu religion; if they were all destroyed, religion would not be affected a grain. A man must only build a house for “God and guests”, to build for himself would be selfish; therefore he erects temples as dwelling places for God.
Owing to the extreme poverty of his family, Shri Ramakrishna was obliged to become in his boyhood a priest in a temple dedicated to the Divine Mother, also called Prakriti, or Kâli, represented by a female figure standing with feet on a male figure, indicating that until Maya lifts, we can know nothing. Brahman is neuter, unknown and unknowable, but to be objectified He covers Himself with a veil of Maya, becomes the Mother of the Universe, and so brings forth the creation. The prostrate figure (Shiva or God) has become Shava (dead or lifeless) by being covered by Maya. The Jnâni says, “I will uncover God by force” (Advaitism); but the dualist says, “I will uncover God by praying to Mother, begging Her to open the door to which She alone has the key.”
The daily service of the Mother Kali gradually awakened such intense devotion in the heart of the young priest that he could no longer carry on the regular temple worship. So he abandoned his duties and retired to a small woodland in the temple compound, where he gave himself up entirely to meditation. These woods were on the bank of the river Ganga; and one day the swift current bore to his very feet just the necessary materials to build him a little enclosure. In this enclosure he stayed and wept and prayed, taking no thought for the care of his body or for aught except his Divine Mother. A relative fed him once a day and watched over him. Later came a Sanyasini or lady ascetic, to help him find his “Mother”. Whatever teachers he needed came to him unsought; from every sect some holy saint would come and offer to teach him and to each he listened eagerly. But he worshipped only Mother; all to him was Mother.
Shri Ramakrishna never spoke a harsh word against anyone. So beautifully tolerant was he that every sect thought that he belonged to them. He loved everyone. To him all religions were true. He found a place for each one. He was free, but free in love, not in “thunder”. The mild type creates, the thundering type spreads. Paul was the thundering type to spread the light. (And it has been said by many that Swami Vivekananda himself was a kind of St. Paul to Shri Ramakrishna.)
The age of St. Paul, however, is gone; we are to be the new lights for this day. A self-adjusting organisation is the great need of our time. When we can get one, that will be the last religion of the world. The wheel must turn, and we should help it, not hinder. The waves of religious thought rise and fall, and on the topmost one stands the “prophet of the period”. Ramakrishna came to teach the religion of today, constructive, not destructive. He had to go afresh to Nature to ask for facts, and he got scientific religion which never says “believe”, but “see”; “I see, and you too can see.” Use the same means and you will reach the same vision. God will come to everyone, harmony is within the reach of all. Shri Ramakrishna’s teachings are “the gist of Hinduism”; they were not peculiar to him. Nor did he claim that they were; he cared naught for name or fame.
He began to preach when he was about forty; but he never went out to do it. He waited for those who wanted his teachings to come to him. In accordance with Hindu custom, he was married by his parents in early youth to a little girl of five, who remained at home with her family in a distant village, unconscious of the great struggle through which her young husband was passing. When she reached maturity, he was already deeply absorbed in religious devotion. She travelled on foot from her home to the temple at Dakshineswar where he was then living; and as soon as she saw him, she recognised what he was, for she herself was a great soul, pure and holy, who only desired to help his work, never to drag him down to the level of the Grihastha (householder).
Shri Ramakrishna is worshipped in India as one of the great Incarnations, and his birthday is celebrated there as a religious festival. . . .
A curious round stone is the emblem of Vishnu, the omnipresent. Each morning a priest comes in, offers sacrifice to the idol, waves incense before it, then puts it to bed and apologises to God for worshipping Him in that way, because he can only conceive of Him through an image or by means of some material object. He bathes the idol, clothes it, and puts his divine self into the idol “to make it alive”.
Swami Vivekananda on Ramakrishna Paramhansa and his message to the world:

Today the name of Shri Ramakrishna Paramahamsa is known all over India to its millions of people. Nay, the power of that man has spread beyond India; and if there has ever been a word of truth, a word of spirituality, that I have spoken anywhere in the world, I owe it to my Master; only the mistakes are mine.
This is the message of Shri Ramakrishna to the modern world: “Do not care for doctrines, do not care for dogmas, or sects, or churches, or temples; they count for little compared with the essence of existence in each man which is spirituality; and the more this is developed in a man, the more powerful is he for good. Earn that first, acquire that, and criticise no one, for all doctrines and creeds have some good in them. Show by your lives that religion does not mean words, or names, or sects, but that it means spiritual realisation. Only those can understand who have felt. Only those who have attained to spirituality can communicate it to others, can be great teachers of mankind. They alone are the powers of light.”
The more such men are produced in a country, the more that country will be raised; and that country where such men absolutely do not exist is simply doomed nothing can save it. Therefore my Master’s message to mankind is: “Be spiritual and realise truth for Yourself.” He would have you give up for the sake of your fellow-beings. He would have you cease talking about love for your brother, and set to work to prove your words. The time has come for renunciation, for realisation, and then you will see the harmony in all the religions of the world. You will know that there is no need of any quarrel. And then only will you be ready to help humanity. To proclaim and make clear the fundamental unity underlying all religions was the mission of my Master. Other teachers have taught special religions which bear their names, but this great teacher of the nineteenth century made no claim for himself. He left every religion undisturbed because he had realised that in reality they are all part and parcel of the one eternal religion.

(This article is a combination of an  excerpt from a series called: Inspired Talks by Swami Vivekananda and an excerpt from the complete works of Ramakrishna And Vivekananda).http://en.wikisource.org/wiki/The_Complete_Works_of_Swami_Vivekananda/Volume_7/Inspired_Talks/Monday,_July_1 :http://www.ramakrishnavivekananda.info/vivekananda/volume_4/vol_4_frame.htm , An excerpt from MY MASTER, lectures delivered in 1896)
******
Additional Note to the Readers:
Shriram Sharma Acharya is a reincarnation of Ramakrishna Paramhansa. He has also been born before as Sant Kabir and Samarth Guru Ramdass. To know more about Shriram Sharma Acharya , please click the link below:http://en.wikipedia.org/wiki/Shriram_Sharma