by Stephen Bello: Talking to Timothy Leary, you’re pretty sure he’s right–probably because his idea alone are enough to induce a mild psychedelic experience. He never lets you forget that he holds an LsD., a “degree” which he says takes most of a lifetime to acquire. 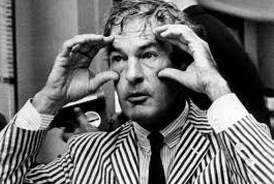 He did some of the work towards this degree at Harvard, while a Lecturer on Clinical Psychology. During the notorious “drug scandal” of 1963 he was dismissed from his post–ostensibly for spending too much time away from Cambridge.

Leary is a surprisingly staid fellow and doubtless disappointed many in his hip audience last Thursday night at PBH. His one concession to that sensibility was an outrageous amoeboid tie, but his tweediness in other respects would have endeared him to any Clubbie, had there been one in attendance. Close-up, Leary looks a little punchy, especially his eyes and nose, but there is certainly no indication of it when he speaks. Inclined to diffidence until he senses some empathy on the part of his questioner, Leary seized the first opportunity to let me know that our “interviewer-victim relationship” was a “game” he had played many times before. His essentially conservative demeanor became even clearer when he essayed hip speech for a moment, mimicking those who object to imposing any structure on the psychedelic experience: “just let it happen, baby.” Spoken by Leary, these words sounded no more authentic than if they had issued from the mouth of N.M. Pusey.

Leary thus feels alienated both from the scientific community which spawned him and from the ultraromantics whose experiences he has shared. “Nobody believes us when we say we’re hard-headed scientists, and the hipsters are put off by the quantitative metaphors we’re developing.” In spite of his pretensions, however, Leary can’t resist an occasional dig at establishment science. “We can’t sit around and wait until foundation-sponsored research gets around to solving our spiritual, sexual, and intellectual hang-ups,” he says. He believes that the solutions to all man’s problems depend upon a deeper understanding of consciousness, which in turn depends, at least partly, on experiments with psychedelics.

The psychic habits of our society are responsible for the “anthill quality of modern life,” according to Leary. People who take the games they play seriously are ants, and the only way out of this psychic provincialism is an expanded consciousness. Psychedelic drugs are a sure-fire way to bust loose, to leave the old games behind and become familiar with new rules, although their use can be a profoundly disturbing experience. While he is not insensible to the moral issues raised by consciousness expansion, Leary has no use for the fear, expressed by the University Health Services, that students who experiment with their own consciousness may suffer from depression and confusion afterwards. “The fact that a few thousand undergraduates are confused doesn’t bother me as much as that more of them aren’t more confused,” he says. “The world is simply not the tidy, static place most people believe it to be.” The ideal of well-adjustment–parochial psychic stability–is abhorrent to Leary, for he feels that such an orientation is fundamentally unreal. “The custodians of the establishment would prefer that we do almost anything rather than quietly study the energies of our own nervous system, yet right or wrong, we are destined to do it.”

With all this in mind it is possible to understand what Leary means when he says that psychedelics are not addictive and therefore less dangerous than alcohol, television, and higher education, all of which trap their true believers for a lifetime. Alcoholics, tube-boobs, and academicians do the same things all their lives, lumbering along, taking their game seriously. They have no way out of their chessboard of familiar concepts; they are addicted to it and addicts are always disillusioned, according to Leary. What is paradoxical, however–and Leary admits it–is that the human nervous system does cry out for a single regime, a game of some sort. The trick then is to choose an addiction that isn’t closed, a game with an out. Such is the game Leary plays with drugs, such are the literary games played by James Joyce and William Burroughs–two of Leary’s favorites. Psychedelics offer such a way out because the “high” experience is different every time, Leary says. Drugs offer no escape from reality, he feels, for rather than solving problems, their use serves to suggest complications that the unexpanded consciousness cannot possibly be aware of.

The normal person in our culture is “hooked to the outside,” in Leary terms. The hook can be disengaged either internally, with drugs, or externally by breaking-up expected, routine, or symbolic patters. Those who become artists and poets have been brought up without what Leary likes to call “strong imprinting” and are able to switch from game to game without his help. The rest of us avoid that which we can’t integrate into the game we’re playing. Rather than leaving it to chance whether an individual is stuck with a single imprint, as Leary thinks most of us are, he envisions a society in which LSD is administered to infant once a week. LSD works, according to Leary, by suspending the old imprints temporarily, and leaves the individual with a slightly altered weltanschauung. A child raised in such a way would be able to watch ten television programs simultaneously, as well as to perform more useful feats such as empathizing with all sorts of people. “Most kids in our society grow up without being sensitized to more than one way of organizing experience,” he says. All the anomalous experiences are filtered out of their lives by anxious parents and precious schools.

“Recently we’ve been trying to force people back into a pre-game, pre-category stage by flooding their senses with random heat, light, and sound stimuli they can’t categorize–by deliberately breaking up the expected,” he says. This technique works best with groups of 12 people, and Leary has found a big market for ten-hour sessions at $40 a head. He and his associates have been busy every weekend recently running these sessions up and down the megalopolis. “After we get people slightly high we try to expand their consciousness to include the autonomic nervous system,” Leary says. The experiments have been so successful that he looks forward to the eventual self-diagnosis of disease. Indian mystics have been doing this for centuries, he points out.

Leary’s visit to Cambridge last week was his first in two and one half years. Since then, he and his colleague Richard Alpert, who was dismissed from the Faculty at the same time, have carried on their research partly in Mexico, and partly in a small town in upstate New York. Though Leary Holds no grudge against Harvard (“wonderful place, extraordinarily sincere and thoughtful administration”) he feels that universities must change to meet the fourth contemporary revolution–consciousness expansion–as they changed to meet the scientific revolution 300 years ago. The new task of the university will be largely destructive, stripping students of their accumulated insensitiveness, perhaps at the expense of the formal instruction that goes on today. In such a university there would be a place for Timothy Leary; at the moment, however, his address is P.O. Box 175, Millbrook, N.Y.