Innovation Sparks:  Over the past 3 months, I’ve spent a considerable amount of time looking at Google’s Glass offering, from an angel and investor point of view, 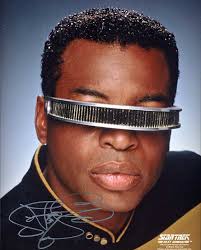 and considering what the next 3-5 years may hold for this new innovation in the “wearable” computing world.  There is no doubt about it, the wearable computing revolution has taken off – initial applications are in the Games, Fitness, SmartWatch and Eyeglass areas. Early-stage companies like Occulus(raised $2.5M on Kickstarter),  FitBit (funded by True Ventures and VCs) and Pebble (which shocked the “crowd-funding” world by raising over $12M on Kickstarter and recently another $15M from CRV).  But we’re not all ready to turn into  Jordy from Startrek…just yet.

A good article on the emerging market was published by Juniper Research late last year. It predicts a market of $1.5 billiion in 2014. Other studies predict $3-6 billion in next 3 years.  I’ve been tracking this research, and have also spoken with several of the analysts predicting and tracking the market.  It is very early.   Most predictions are based on Google’s recent press around Glass, which is not due to ship to the public until 2014.  So, much of this is speculation.

In May, John Doerr of Kleiner Perkins, Google Ventures, and Marc Andreesen’s firm announced a “partnership” called the “Glass Collective” to fund projects related to wearable computing, particularly Glass application developers.  Others have not followed officially, but you can be sure there are dozens of VC partners who would like to find the “right project” to back and be part of the trend.

While the demonstrations of Google Glass, and examples of how it can be used, are compelling, it is too early to know whether consumer adoption will take off quickly, or require some “killer apps” to get it going.  So, in my mind, an investment horizon of 3 to 5 years for hardware-related start-ups, and 6 to 9 years for solution-related start-ups is not unreasonable…unless Google’s offering takes off like the iPad did when it came out.  Given the much more limited functionality, my guess is that it will take a slower, but steady ascension, until several software creators build compelling apps.

Is anyone else at home?

So far, only Google has made major public announcements, only Google is taken adeveloper/partnership approach of seeding the market with a “platform” to work from (just like Apple did for iOS and the iPad to capture the early market), and only Google seems to be building any passion around this space.  Several smaller players in the occular market are also making stirs, the most interesting of which is Vuzix, which has developed a light-weight unit similar to Google Glass plus additional options for for full-field view (Google Glass does not place a viewer directly in front of the eye).

But where is Sony? Where is Apple? Where is Amazon?  Where is Samsung? These are all players who have capability of creating a platform that combines the best of wearable/small hardware with systems for constructing applications on top of it.  My research shows they are all QUIETLY working on competiting devices in the labs and with Skunkworks teams, but even within each of these companies, few executives are aware of what the plans may be or how they will challenge Google if the market takes off.  Count on Google, with its strong Android developer base to capture an early lead, based on its boldness today, unless someone comes along to challenge in the next 6 months.

The place to look for competitors is is based of Android and iOS — there are thousands of developers for these two platforms.  Given that Samsung is a major Android player, and known for its innovation, you may want to keep your eyes peeled there for future entries.

What is the opportunity?

There are several areas that you can expect to see investments in the coming two years:

2) Solutions/applications: this is what developers for Google class are currently working on, and will include a wide range of horizontal and vertical applications that further enable class to do a series of specific manipulations with images, video, sound, touch, etc.  A variety of applications fall into a class called “Augmented Reality“, which I view as a “catch-all” category for companies that are not sure WHAT they want to be when they grow up.  (Note: I’ll write about this more in future blog posts, as it’s occupying much of my life right now thinking this through)

3) Augmenting Hardware: this area will be less populated, as these days there are fewer hardware plays in the market, but expect to see several entrance, particularly in the area of “eye-tracking”, video/photo capture, and sound/voice.

In addition, expect to see a variety of vertical applications to help for specific use in areas such as retail, warehousing, facilities management, shopping, etc.

The applications that interest me, personally, the most would be those that impact a wide horizontal “functional areas” such as reading, scanning the environment, and travel.   In these instances, I think that glasses and play a central role in. Fundamentally changing the way that we approach the task –  thus changing the overall experience of the user.  THIS IS THE AREA WHERE WE CAN EXPECT TO SEE DISRUPTION.

What would an investor look for in this space?

As with any start up, the best place to start is with the Team.  A CEO/Founder who has been a pioneer previously in bringing the technology/IP  to end-user oriented solutions will have an advantage. Teams with prior deep knowledge on particular application or solution areas that they want to add wearable computing to will shine… compared to those who have simply “a good idea.”  Teams that include a bit of experience with hardware they also have an edge, and working with a device such as Glass, since control of the Glass is a key component of making it feel seamless to the end-user.  Finally, Designers with background in mobility, would clearly be an asset.

Investors will also seek innovative solutions using wearable computing that go beyond what one could do with a phone, tablet or

computer.  The solution needs to blaze trails in new use of computing in every-day or business life.  For example, being able to shop with glasses, such that your wearable device provides information on products you are looking at, comparative pricing, ability to see the product in use, and other “augmented” tags (promotions, similar products, cost to build, etc), would allow for a shopping experience never before available.

Lastly, I think we’ll be seeing some new/emerging business models that focus on wearable computing’s ability to access the cloud on a pay-as-you-go basis, as well as seek/look-up information on real-time.  With present Google Glass, I don’t for see that banner advertising will work well, because of the size of the display, but approaches that allow advertisers to promote their products or information about their products will abound.  Google itself is currently trying to figure out its best model – as it had to with Android.  Of course in Google (or Apple, Sony or Amazon’s case) there is more content and advertising sold by having the user using new wearble technology, so a direct business model will not be needed.

Follow this blog for more articles in the coming year on this space, as I dive deeper.