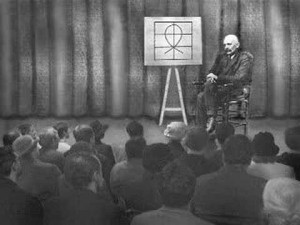 Dr. Kathleen Speeth, from the California Institute of Transpersonal Psychology, has suggested that what Ouspensky and his teacher Gurdjieff have proposed are psychotherapeutic techniques which bring the various fragments of the ego into awareness, gradually acquainting the “I’s” with one another.

But there is another element in the Fourth Way view of human beings which creates a backdrop to the ideas just mentioned. This has to do with the very concept of consciousness.

Ouspensky dismisses the notion that consciousness is equivalent to mind activity. Consciousness is a particular kind of awareness concerning who we are, where we are in the moment, and what we know in the deepest dimension of our being. It never remains the same but can be made continuous and controllable through special efforts and study. The Fourth Way points to four states of consciousness: sleep, waking state, self-awareness, and objective consciousness. Most everyone lives only in the first two states.

The third state, self-consciousness or self-awareness, is one that we believe we possess even though we are conscious of ourselves only in rare flashes. Such flashes come in exceptional moments, in highly emotional states, in times of danger, or in new and unexpected circumstances. We have no control over their coming and going. This state of consciousness is similar to the Buddhist concept of “mindfulness” which Thich Nat Than describes as “keeping one’s consciousness alive to present reality.” However, the Gurdjieff teachings provide more details about our ordinary state which is described as “sleep,” the same state referred to by Christ when he said “Watch! Do not sleep.”

Ouspensky writes concerning this condition: “If we knew the quantity of wrong observations, wrong theories, wrong deductions and conclusions made in this state (our ordinary consciousness), we should cease to believe ourselves altogether.” Dr. Speeth, in her book The Gurdjieff Work, observes that anyone who has a difficult time accepting the notion that as we are we have but few moments of true self-awareness, ought to make a study of the loose jaws and vacant stares of people in public places and in situations where they do not think that they are being observed.

According to the Fourth Way, the central obstacle to higher levels of consciousness is a phenomenon known as “identification.” Ouspensky describes it in this manner: “In this state man has no separate awareness. He is lost in whatever he happens to be doing, feeling, thinking. Because he is lost, immersed, not present to himself, this condition is known as a state of waking sleep.” When we are identified, our attention is directed outward and we are lost to ourselves. Self-awareness is then a state in which we become aware of ourselves and are no longer hypnotized by the external event before us.

There is a higher level still to be reached which the Work calls “objective consciousness.” In this state, we come into contact with the real world from which we are cut off by the senses. Some psychologists deny the existence of higher states of consciousness, dismissing them as dream-states. It is strange that Sigmund Freud, who discovered so much about subconscious states, should not have postulated the existence of levels of consciousness above as well as below the level on which we usually live. But in order to reach the more silent areas of consciousness, what the Work calls our “higher centers,” we must get beyond the noisy regions of our minds in which we spend so much of our time.

The attainment of higher levels of consciousness is closely related to certain religious practices which are found in all cultures, such as meditation and contemplation. These are difficult paths to tread because our attention is always being caught by the ceaseless chattering in our heads. Yet it is possible to become receptive to a state of pure consciousness without thought, a state in which truth is revealed to us directly, without the use of words.

In order to see clearly the roots of our psychological distortions, the Fourth Way defines two aspects of the individual: essence and personality. Essence is what a person is born with, personality is that which is acquired. All that is learned, both unconsciously through imitation and through acquired likes and dislikes, constitutes the outer part of the person, that which is changed by outer circumstances. Though personality is necessary, it must not be left to dominate essence or it will produce artificial persons cut off from their true natures. “This means that with a quick and early growth of personality, growth of essence can practically stop at a very early age, and as a result we see men and women externally quite grown up, but whose essence remains at the age of ten or twelve.”

Through the practice of self-remembering, we can separate ourselves from the pretenses and imitations which have enslaved us since childhood and return to who we actually are. Such a return to our essential nature is accompanied by a sense of liberation unlike any other. “To thyself be true” is the first commandment on the way of self-development and the attaining of a higher consciousness.

According to Rodney Collin, one of Ouspensky’s primary students who started his own Fourth Way School in Mexico, the fundamental abnormality in human beings lies precisely in the divergence between personality and essence. The more nearly we know ourselves for what we are, the more we approach wisdom. The more our imagination about ourselves diverges from what we actually are, the more insane we become. He writes: “Unless a man first finds himself, finds his own essential nature and destiny, and begins from them, all his efforts and achievements will be built only on the sand of personality, and at the first serious shock the whole structure will crumble, perhaps destroying him in its fall.”

For Rodney Collin, the soul is the totality of the moments of self-awareness during one’s life. Yet moments of higher consciousness are very rare and gone as soon as they come. Once again, the reason such self-consciousness is so difficult to attain is that it is dependent on the conscious use of attention.

One of the most practical and meticulous study of the ideas of this inner work on oneself is found in Maurice Nicoll’s masterful Psychological Commentaries. Here the reader will come upon the “nuts and bolts” of transformation. Nicoll states somewhere in these five volumes of lectures given to his students that, as you make progress in the Work, “what you took as yourself begins to look like a little prison-house far away in the valley beneath you.” This is a vivid expression of the “third state of consciousness” or “self-remembering” as it is called. These flashes of greater consciousness are the unexpected results of the strenuous efforts made in order not to lose oneself in the rush of outer circumstances, to be cleansed from the acids of negativity, and to maintain a heightened awareness grounded in the present.

The student is to reach a point where he or she can make the choice not to react automatically to external stimuli. This requires going against the grain, against long established habits and self-indulgences. The question is as basic as: can you find the willpower to choose not to react angrily to something that makes you angry? Rather than being wasted in such an outburst, the energy accumulated through this effort can be available for a moment of intensified consciousness. Such a moment will flood you with peace or quiet joy or a sense of profound liberation.

Oddly enough, such rare and precious moments often come in very paradoxical events. When night is darkest, a shaft of light can suddenly breaks through. Self-remembering, combined with the insights of objective self-observation assists in the creation of a balanced individual who is not completely under the sway of his or her inborn nature and acquired habits. It is not possible to experience a vaster sense of reality if we are entirely under the dominance of the intellect to the exclusion of the emotional or the instinctive part of our nature and vice-versa. In attempting to make the “machine” work right, it is necessary to change attitudes and behavior developed over years of wrong functioning.

Ouspensky told his students that it is only when we realize that life is taking us nowhere that it begins to have meaning. This observation is not a philosophy, but a pragmatic realization which can fundamentally alter our perception of ourselves and of the world around us. Maurice Nicoll gives a hint of these first stages of real change in his Commentaries: “This gradual withdrawal of energy from the customary, easily resentful and brittle feeling of ‘I’ is accompanied by a gradual new and broader feeling of I, as if one were living in a larger place…It is like being introduced to a new civilization, to another form of life.” He points out that by using the inner camera of self-observation, we begin to open a mind above the level of the sensual mind.

Here is where the psychological experiences of the Fourth Way begin to reveal their numinous and “religious” character. The same idea is found in the teachings of Karlfried Graf Durckheim which is informed by Zen Buddhism, Christian mysticism and psychotherapy. He writes of the experience of higher awareness in this way: “It is no longer the old I but a wider, more comprehensive one. We do not lose ourselves in it but, on the contrary, truly find ourselves. A new breathing space, scope and sphere of action opens up and we realize only then how confined we had been before, how imprisoned and isolated.”

Durckheim also gives us a clear description of the first steps of inner development which are fundamental to all such instructions: “Practice on ourselves, in the physical and spiritual sense, is always of two kinds. It involves both the pulling-down of everything that stands in the way of our contact with Divine Being, and the building-up of a ‘form’ which, by remaining accessible to its inner life, preserves this contact and affirms it in every activity in the world.”

Self-remembering, then, is a process of being lifted out of our ordinary sense of self into a purified, detached space well known to those long practiced in meditation. But in the Fourth Way this birth of new awareness can be accomplished while one crosses a city street or takes out the trash. Nevertheless, despite the practical approach of the Work, self-remembering remains as intangible and paradoxical as any spiritual exercise. Reminiscent of the Zen koan, Rodney Collin told his students that we cannot remember ourselves until we forget ourselves. And at the height of his powers of understanding, he united the Fourth Way with the wisdom of all times and places: “To feel beauty, to feel truth, that is self-remembering. Self-remembering is the awareness of the presence of God.”