The teachings of George Gurdjieff are at the core of all that is most profound in religions, philosophies, and esoteric knowledge. 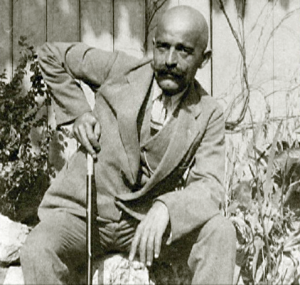 He presents us with practical, uncompromising self-discovery, self-realization and self-transcendence.

Gurdjieff said the following about his ideas: “This teaching is for those who are not satisfied with what they have found in life and who feel that there must be something else beside success and failure in life and beyond what they have been taught in school and by their upbringing.”

The ideas that he brought to the West and the system of work on oneself which came to be known simply as “The Work,” have the power to transform human consciousness and its understanding of reality. Anyone who begins to practice for a time the efforts of self-observation, divided attention, and self-remembering under the guidance of someone who has understood and lives the teachings will discover their radical impact on the human psyche.

Gurdjieff essentially synthesized ancient esoteric teachings and made them approachable and applicable to the lives of rational Western individuals. A seeker will find in his teachings an immeasurable treasure, the essence of so many other teachings, both spiritual and psychological, on the inner life. This extraordinary system of thought, which ranges from the most intimate, psychological insights to a grandiose cosmology linking the individual with the universe, is a synthesis of practices and teachings known as The Fourth Way. It is named the Fourth Way to differentiate it from the other ways of conscious evolution: the Way of the Monk, the Way of the Fakir, the Way of the Yogi. Each of these classic methods of human transformation focus on different aspects of the individual: emotional, instinctive, intellectual.

The Fourth Way deals with all of these dimensions at once, seeking to create a balanced individual whose inner work of transformation occurs in the midst of his or her daily activities. There is no need for monasteries, ashrams, or physical asceticism. Yet the efforts made are as intense and demanding as any of the practices which take place in those settings. The “Work” is entirely inner, invisible, and individual.

Then there is the man himself. Gurdjieff was the archetypal Master, beaming with extraordinary psychic powers developed in secret schools and monasteries somewhere between the Caucasus and the Himalayas; brutal soul-shattering insights; marvelous humor which was both ribald in the extreme and breathtakingly penetrating. He also had a capacity for love that was matched only by his ability to express rage. He was a master hypnotist, a master actor, a master healer. Those who encountered him often had opposite ideas of who he was, usually as a result of his own intentional behavior. He sometimes gave the impression of being a simple charlatan to arrogant individuals who would come to question him, while to others he was the most enlightened man they would ever encounter.

This powerful Master with eyes that pierced to the depths of the soul was also an old man whose pockets were full of candy for the children. This mysterious outsider who revealed new horizons that tore down society’s social conventions and cherished beliefs, was also closely, though secretly, associated to the Russian Orthodox community in Paris. Several important teachers in their own right were born from his tutelage. P.D. Ouspensky is the most famous one. He presented the Work from a more intellectual perspective, though it still remained very practical. His book, In Search of the Miraculous, is one of the best expressions of the work ideas available to us.

Other leading students included Rodney Collin and Maurice Nicoll. Both have written remarkable books that shed light on what is now called the Gurdjieff-Ouspensky work. Nicoll’s Psychological Commentaries on the Teaching of Gurdjieff and Ouspensky consist of a five volume set of essays that cover the minute details of working on oneself. Gurdjieff called this path the way of the “Sly Man.” This term is a poor translation of the French “le ruse” which has less negative implications and might better be translated as “clever” in transforming the difficulties of the moment into opportunities for spiritual awakening. Similar to the Zen Buddhist masters and their saying that “each moment is the best opportunity,” Gurdjieff wanted his students to learn how to use the circumstances of each moment — both the internal and external — as food for the development of a new state of consciousness.

P. D. Ouspensky opens his lectures recorded in The Psychology of Man’s Possible Evolution by stating that psychology has lost touch with its origins and its true meaning. He argues that, in its essence, psychology is the oldest science known to humankind and a largely forgotten one in spite of the fact that never before in history have there been so many psychological theories. He suggests that psychological systems can be divided into two categories:
1. Systems which study the person as they find him/her or as they imagine him/her to be (these are our modern systems).
2. Systems which study the person not from the point of view of what he/she is or what he/she seems to be, but from the point of view of what he/she may become.
These last systems alone explain the forgotten origin and meaning of psychology. According to Ouspensky, psychology is “the study of the principles, laws, and facts of man’s possible evolution.” His fundamental assumption is that human beings are not completed persons. Nature develops us only to a point, and it is only by individual efforts that further development proceeds. He writes: “Evolution of man in this case will mean the development of certain inner qualities and features which usually remain undeveloped, and cannot develop by themselves.”

The evolution of human consciousness is a question of personal efforts and is therefore a rare exception among the majority of human beings. To those who would wonder at the seeming unfairness of this assertion, Ouspensky responds that most people simply do not want to awaken. To become a different being, we must want it greatly and over many years. Without the necessary efforts we will not evolve. Moreover, we must acquire qualities which we believe we already possess but in fact do not. In the Fourth Way, this insight is the first step in the direction of inner evolution: we do not know ourselves.

The teaching tells us: “Man has invented many machines, and he knows that a complicated machine needs sometimes years of careful study before one can use it or control it. But he does not apply this knowledge to himself, although he himself is a much more complicated machine than any machine he has invented.” This “machine” is brought into motion by external influences. All actions, ideas, and emotions are responses to the stimulus of external events.

For Gurdjieff and Ouspensky, such mechanical persons are asleep to their true condition and virtually incapable of change. “By himself, he is just an automaton with a certain store of memories of previous experiences, and a certain amount of reserve energy.” Everything happens to us as to puppets pulled by invisible strings. Ouspensky believes that if we could perceive this phenomenon, then things would begin to change for us. We human beings are not merely stimulus-response machines, but machines which can know that we are machines! Realizing this, we may find ways to cease being simply reactive organisms.

THE ILLUSION OF UNITY

Another central idea in the Fourth Way is that the individual is not one. We have no permanent “I” or Ego. Every thought, feeling, sensation, desire is an “I” which believes that it is the whole person. Yet none of these “I’s” are connected and each depends on the change of external circumstances. To make things worse, there are often impenetrable defenses between each “I” which the Work calls “buffers” separating these subpersonalities from one another.

Gurdjieff states that one of our most important mistakes we make is our illusion about our unity. He writes: “His “I” changes as quickly as his thoughts, feelings, and moods, and he makes the profound mistake in considering himself always one and the same person; in reality he is always a different person, not the one he was a moment ago.” Our every thought and desire lives separately and independently from the whole. According to Gurdjieff, we are made of thousands of separate I’s, often unknown to one another, and sometime mutually exclusive and hostile to each other.

The alternation of I’s is controlled by accidental external influences. There is nothing in us able to control the change of I’s, mainly because we do not notice it. Each separate I calls itself “I” and acts in the name of the whole person. This explains why people so often make decisions and so seldom carry them out. A little self-observation will prove that we usually think, feel, move and respond to the stimulations acting on us, without our being aware of what is happening within us. This self-observation is in fact the first practical effort required in the Fourth Way. The student is to create an “observing I” which observes with objectivity his or her inner activity. To develop an objective space within which can see without judging is extremely difficult but is also the first breakthrough out of our mechanical behavior and the virtual hypnotic trance in which it keeps us.