How Often to Exercise

by Gretchen Reynolds: Does it really matter if I work out three days in a row, rather than spreading my exercise through the week?A: It probably does matter. As Dr. Michael Joyner, a physiologist at the Mayo Clinic in Rochester, Minn., points out, exercise has long-lasting, cumulative effects on your health and fitness, but it also produces acute effects that don’t necessarily linger. 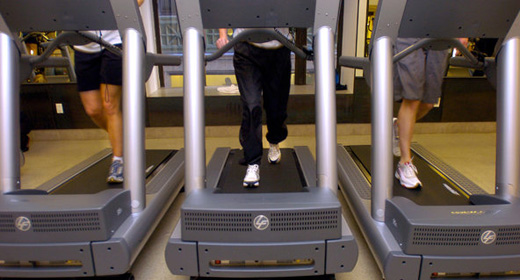 A brisk walk can lead to almost immediate improvements in blood-sugar control and blood pressure for many people, he says. But if you then don’t walk or otherwise exercise for several consecutive days, those health benefits can evaporate. “There is good data in animals,” he says, ”showing that when running wheels are locked,” and the animals can’t exercise, “the positive metabolic aspects of training start to dissipate within days.”

Endurance also fades if you skip exercising for too many days in a row. The same is true, sadly, with motivation. In study after study, researchers have found that one of the primary reasons people continue exercising is that they enjoyed yesterday’s exercise or the exertions of the day before; they felt healthier and more physically masterful afterward and wish to relive that sensation. Longer periods between exercise sessions potentially could dull that enthusiasm.

Similarly, there is some evidence that injury rates can rise after a multiday layoff, especially in activities requiring well-honed technique. A 2011 study of circus performers found that two-day breaks between performances lessened injury rates, but the rates rose again if performers rested for three days or more.

“The key is probably to not miss more than two days in a row,” Dr. Joyner says, “and skipping only one day is even better.”