Mooji is a Guide to Truth

by Eva D. Hofmann: It is about experiencing being without any mental concepts, influences from outside, preconceptions; just being from which unconditional love
will arise. 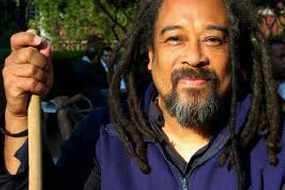 We do not die. This is a myth. For only that what we are not can die
His infinite humility, devotion and love will always touch deeply. Tears
start running. Laughter will arise.

Just as the philosopher’s stone will change everything it gets into
contact with into gold, in the same way will the presence of a selfrealised human being transform the heart of the seeker merely by being the way he or she is. Eva Hofmann tells us about an extraordinary Advaita teacher.

To write about a teacher who claims not to be a teacher leads us direct
into the matter: Advaita – Non-duality. Simply be.

Mooji is well-known by more than one and a half million people, either
personally from satsangs whenever he travels from England (London)
through the world to North and South America and India, or in Europe
when he is invited by disciples in Italy, Spain, Germany to give satsangs.
Or also by the innumerable clippings from satsang recordings on his
website, on YouTube and other channels, which his sangha and other
creative friends offer online. Quite often I heard people say after satsang
that a video clipping had given them the push to meet Mooji personally:
Spontaneous deep love for him had arisen when watching the video.
From artist to mystic

Who is Mooji? When reading his biography we will learn that he was born
in Port Antonio, Jamaica, on 29th January 1954, moved to London in his
teens to join his mother and that he now lives in Brixton, a part of
London. In the past he had been known as Tony Moo, but now the many
spiritual seekers and friends coming to see him from all over the world call
him lovingly Mooji. Mooji used to paint street pictures, glass windows and
taught arts at a college in Brixton, London, – until 1987 when he
happened to meet a Christian mystic.

The central question “Who am I?”, that Ramana Maharshi gave his
disciples to guide them in meditating, is Mooji’s subject as well. Quite
often the seekers who come forward are asked this question. However, he
does not expect any answer to this question, but he points out that
answers are cheap, and that everyone should ponder this question
inwardly. The point is to experience who asks this question, the point is
the direct experience of being, of an impersonal being, free from a “bad
smell” how Mooji calls it sometimes. The focus is on experiencing being
without any mental concepts, conditioning, preconceptions; the focus is on
simply being from which unconditional love will arise.

Mooji commits himself to every single person, does not argue in favour of
any special, specific meditation practice which we will recommend. No, he
emphasizes that no special practice is necessary, that only mind asks for
direction. You do not have to walk towards a goal, because we are all
already awakened, only the mind will interfere again and again. Just like
clouds on the blue sky, thoughts, concepts, feelings will slip in front of the
unchanging consciousness and sometimes will even conceal it completely.
This experiencing of living and being here and now, which has no past, no
future, and also has no birth date, no gender, no name, is possible for
everyone, says Mooji. And many people experienced exactly this, following
his words: “Don’t pay any attention to your thoughts, that will kill them,
this way they lose their power.” And again and again he will point out:
“You are that, you are that in which everything comes up, what is seen.
You are that – invite everything.” He once expressed it by this picture:
“Wherever you go, a garden will develop, however, you are not a
gardener.”

For Mooji nothing human is alien. He knows that the range of expressions
is surprisingly manifold, if consciousness plays in the form of human
beings. Truth is infinite and also here right now, it is not necessary to
travel there. Mooji is a guide and signpost to truth.

It was quite natural for me to see and hear Mooji and to stay with him (in
the heart). His word destroyed quite a lot of concepts right in the first
satsang session. When I sat in front of him and realized the infinite
emptiness in his eyes, something laughed and cried in and out of me, I
was shaken and a new phase of life started. And even if everyday life still
sometimes puts me through the mill, even if fears come up, all that will
not be able to take up much room in the wide consciousness. Along with it
love will flow, and peace is felt just like joy in experiencing that here and
now everything is all right even if pain(s) is/are there, and this basic
feeling will not stop; it is unchangeable in spite of all changes.

Children love Mooji. They cling to him, seek to be near him and even in
satsang they come up to him. He listens to them attentively, too, takes
them seriously as if they were grown-up, and answers their blunt
children’s questions in a loving and paternal way. Here, too, simplicity,
clearness and comprehensive understanding is to be felt.

Often disciples will address the theme of dying in satsang and their fear of
dying. Mooji will then tell them that Ramana did not have any fear of
dying, not as a young boy, when Ramana suddenly had the feeling that he
had to die and lied down on the floor motionless in order to experience
this process in full consciousness and completely awake without any fear.
Many years later when Ramana’s disciples lamented that he would have to
die soon as he was very ill, Ramana then replied that he soon would
experience his “finest hour”.

A sangha formed around Mooji with people who are full of creativity and
have accompanied him on his journeys for many years. His retreats and
satsangs are characterized by attentiveness and devotion to him and the
participants, and at the same time all people around him are open for all
arising situations and requirements. The number of participants in his
satsangs is continuously and steadily increasing. Mooji’s “crew” is faced
with numerous tasks, however, it is not only organising they are
preoccupied with, you will always feel that they live love. And again and
again I experienced how the “Moojis” carry his love and peace into their
environment, meet irritated and over-worked or sick people with soothing
understanding in everyday life.

Meanwhile two books came out of Mooji’s satsangs: “Before I am” (2008)
and “Breath of the Absolute” (2009). The simplicity and radicalness of his
works sometime remind of the words of Zen masters. In his first book
Moojis tells the readers: “Use my words but don’t hold onto me. Look for
yourself. Look by yourself. It must all be your own discovery.”

Mooji is living love, powerful love that does not shrink from tearing off the
blinders from the eyes of people. He will also utter uncomfortable truths;
he sees clearly whenever somebody is entangled in the traps of mind and
will not escape the lure of ego. Just as infinitely manifold and different
human beings are, just as manifold and varied are his answers to the
questions. His words flow in freedom, “it” will talk, not a person with a
personal message, teaching or intention is hiding behind the words. He
talks with and out of the infinite wisdom of the wise men of this world. Om
shanti.