by Sharon Henshall: Mooji sat patiently in my inbox for 6 months! At the moment a friend mentioned his name, I’d emailed myself a message with ‘Mooji’ in the subject-line: my usual method of remembering whatever catches my interest. 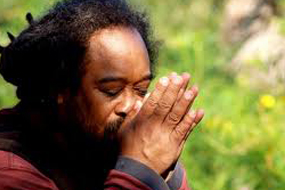 My life was, and is, full to the brim. I love what I do, but hours are long and pressures are high. At this particular time, stress levels were increasing whilst energy levels were depleting: not a good combination. I knew I needed to look within and make changes, but never seemed to find time. Occasionally still I’d spy ‘Mooji’ in that overflowing inbox. At last, during a quiet period between Christmas and New Year, I plugged his name into Google. Instantly an array of YouTube options presented themselves, alongside a face exuding warmth and wisdom. I was intrigued.

Tony Moo was born in Jamaica but moved to England and has lived in Brixton since he was a teenager. Now in his fifties, he is affectionately known as Mooji by those who  recognise his words as coming from a man living in truth. His spiritual journey makes for an interesting read, but the more I listened to him speak the less I was interested in his
past. What he says today catches my attention more.

Mooji holds ‘satsangs’ and anyone attending is welcome to sit before him and ask their burning questions about SelfRealisation. It soon clicked that offering ourselves up like this helps kick our ego, the one telling us to be concerned with our image, into line… The thought of sitting at the front of a crowd certainly horrified my ego! Some people arrive
on that hot spot without even a question; they just have an urge to put themselves in the fire and see what unfolds, and, inevitably, something does. They sometimes ask if their
feelings of shyness and fear, all those emotions they feel uncomfortable with, will disappear. Mooji responds that they may remain but will no longer be “front-page news”.

Mooji’s response to the seekers of truth who put themselves before him always touches my heart, whether his words make sense to me at the time, or not. There is no sense of
formulae or magic dust: he answers with honesty, directness and wisdom. He also has a fabulous sense of humour and, at times, tells relevant stories or gives amusing analogies,
which tickle even him – his chuckle is contagious. This adds lightness to a topic which he is actually deadly serious about: the understanding of who we are and why we are here. His answer: to realise the Self, to experience the Self and to live only in truth. It seems to me the kind of thing sages head to caves to discover; not something more conventional lifestyles permit. But, whilst listening to Mooji, it dawned on me that this wasn’t necessarily the case. A cave didn’t need to be on our destination list, we just needed to look within – where he pointed.

The question of who I am, and why I am here, burned ever more brightly in me as time went on. I became an avid watcher of his online satsangs, and attended a one-off satsang in London. All of which brought me not into a place of total understanding, but into one where changes were definitely taking place. Life continued to be hectic but I no longer fell into the same stressful mindset, or, at least, not so frequently. To worry and feel stressed takes so much effort that ceasing to do so helped on many levels.

Waking Up in Clapham

Whenever a new satsang came online I would tune in, but after a few months I felt myself falling into old patterns of stress once more. I realised I had been attached to an expectation of things becoming ‘easier’ in the pace of my lifestyle, due to this inner shift. When, externally, things stayed the same, part of me felt frustrated and my mind began casting doubts once more. I attended an intensive weekend in London with Mooji, which involved satsangs over 2 days. On day one, I was tired and resistant; not much of what was being said kept my attention. On the morning of day two, I took the Tube as I headed back to the venue.

Without being consciously aware of my thoughts, I realise now I was following to where Mooji points. He often says “Can we see the see-er?” I could agree that there is some
part of us that is aware of all that occurs in our minds… it sees the feeling of anger, happiness etc arise and sees those feelings disappear; it sees thoughts come and go, it sees us analyse sensations in the body and sees everything else that occurs. But Mooji wants us to question: can we see that see-er? When he asks this, he always clarifies that he is not looking for a verbal answer but that this is a question to contemplate for ourselves: the answer is something we can only experience – not verbalise. So, whilst heading towards Clapham Junction, of all places, I looked for that see-er and experienced something which words complicate, but which, in actuality, felt so simple. It was simply nothing. By the time I arrived at my destination I felt a deep sense of peace and, that day in satsang, I understood every word that Mooji said. It was just so easy to follow: no effort required. The day went on longer than anticipated and I missed my bus home.
I was aware that this made me a little anxious, but it was definitely ‘back-page’ news.

Now, I’d love to say that this deeper understanding continues back in my busy life, but I notice it still very much comes and goes. Or rather, I buy into my thoughts at times, and at others I don’t. Mooji says the mind throws stones in the bushes to distract us when it feels we are close to the truth. I keep getting caught out by the noise of these stones landing but no longer want to be interested in distractions! It seems the more we understand about ourselves the less we can do anything to cause harm to others, ourselves and our planet. As this is what most of us hope for, then logically we should all start by looking within. Listening to Mooji you get a sense that he understands everything, but I have often heard him say that he knows nothing other than the Self.
It seems, therefore, that Self may be all we need to know. I sometimes wonder why it is that so few of us truly make this our priority.

Most days when stressful thoughts arise I now simply choose not to invest in them. I am left still physically tired, due to my long hours, but in my heart I feel a joy that seems to remain pretty steady. I have more internal space as less is consumed by fruitless worry. I feel happy over the simplest of things; even the motion of my tired body walking me to
work each day can fill me with a sense of joy. Mooji has a presence which draws people from all over the world, and he welcomes all Self-enquirers and seekers of the truth. He doesn’t describe himself as a guru, spiritual teacher or, indeed, by any other title. He just shares his experience with those who have a genuine interest in seeking truth for themselves. You can find Mooji in India during January and February as well as in London or Portugal at various other dates throughout the year (www.mooji.org). And, of course, just tune into good old YouTube, if you don’t wish to leave your
modern-day cave!