A Gateway to the Art of Higher Dimensions and Synchronicity

by Amy Lansky:  A few years ago, while I was writing Active Consciousness, I was talking to an acquaintance about higher dimensional space and how 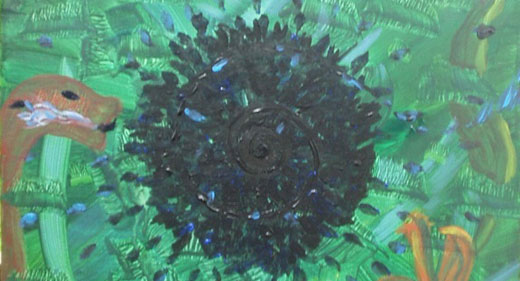 I believed human awareness could transcend the boundaries of our three-dimensional physical bodies.  He immediately said, “You’ve got to read this book — The Ever-Present Origin” and wouldn’t let up until I agreed to check it out.

This amazing and dense philosophical treatise, by German philosopher Jean Gebser (1905-1973), draws upon the history of human art, music, architecture, philosophy, religion, and science to show that human consciousness has changed over time, and indeed is mutating or making transitions that reflect discrete jumps — true transformations into higher and higher dimensions of awareness.

Gebser’s ideas formed a philosophical foundation for the work of many modern thinkers like Ken Wilber, whose ideas I discuss at length in Active Consciousness. As both Gebser and Wilber point out, a particular level of awareness or consciousness continues until it becomes deficient to meet the needs of reality. Stress and chaos (perhaps like the kinds of things we are currently experiencing in the world) herald a shift into a new form of awareness. And with that shift also comes new forms of human creativity — art, literature, music, science. 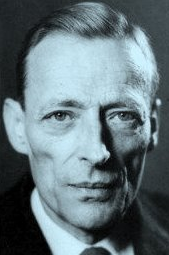 Gebser also believed that these leaps are directly tied to spatial dimensional awareness. For example, he surmised that Egyptian and other early forms of painted art are two-dimensional (lacking the illusion of perspective, shadow, and other signals of three-dimensionality), not because these people lacked technique, but because their consciousness was similarly two-dimensional. It’s not that the Egyptian eyes were not physically seeing as we do, but that their consciousness and perception of their reality was in some ways more “flat”. Society was structured and fixed. Things were as they must be.

With the coming of the Enlightenment in the 1600s came artists like Vermeer and Rembrandt. They used light and shadow in dramatic ways to vividly capture three-dimensionality. And unlike much of previous art focused on religion or political figures and structures, they captured the adventures of everyday people in their quest for personal fulfillment and truth. Awareness had become three-dimensional. We understood ourselves as individuals with the freedom to affect our environment in any way physically possible.

But something began to change in the late 19th and early 20th century. A fourth dimension began to pop up in our awareness. At first it was color. Artists like van Gogh shocked their viewers when they painted things in colors, not as they appeared, but as the artists felt them. An extra dimension of energy and light also made itself visible using pointillism and other stylistic techniques. Inherent forms also became dominant, rather than realistic imagery. And then came Picasso.

I must admit, I never understood or enjoyed the later work of Picasso until I understood it as four-dimensional art. In one image, Picasso captured stylized aspects of the same subject as it moved over time. In other words, Picasso captured the fourth dimension of time. Alternatively, he captured multiple perspectives from different locations in space — even internal views of the subject were sometimes used. All of this is possible from a four-dimensional spatial viewpoint. That takes us to even more current artists. I believe that many are now working beyond the idea of representing something. Instead, they are receiving their art. Their imagery is coming from some other source, some other wellspring of awareness.

My recent realization of this fact has made a tremendous difference for me in my own art. I am definitely an amateur, but I take up a brush now and then. Despite taking a class in modern art, I still could not get beyond trying to represent something. I could get as far as impressionism, capturing objects in different colors as I felt them, or drawing them in a more basic elemental form, but I just didn’t “get it.” But something has now changed for me. I have now realized that I just need to receive a painting. I don’t even have to know what I’m going to do when I stand before the canvas. All I have to do is enter a state in which I can receive information about what needs to be done.

Of course, all great artists from every era, no matter what their personal state of consciousness, create from a heightened state of the Now and receive their creation. As Michelangelo said of his sculpture of David, “‘Creating The David was easy – all I had to do was remove all that was not the David.” But even Michelangelo knew that his goal was to sculpt the David. 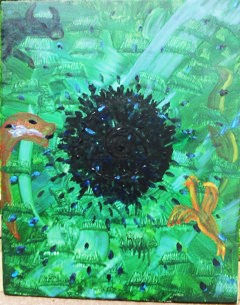 The image at the beginning of this article is one of my paintings currently in progress. It is the result of three steps of “receiving”. First I received a green background with textures. On my next day of painting, I received the idea of the black vortex. And on the third day, I saw images of creatures coming out of the painting, asking to be painted. My plan is to continue this process until I receive information that tells me that the painting is complete.

How liberating! I have learned to create art that is received from some inner space within — from the higher dimensional world of all possible forms and perspectives and even sources of information beyond my own mind or soul. It is literally the art of synchronicity. By entering the Now and trusting that whatever appears is there, not by coincidence, but with meaningfulness, a new creation is brought into physical form. Art, music, writing — even life itself! — can be created in the same way.

Is this the art of the fifth dimension? 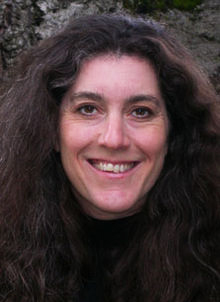