A Critique of Understanding Human Nature and What Life Should Mean to You, by Alfred Adler (excerpt) 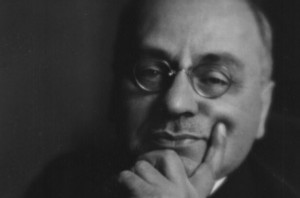 Alfred Adler, associated for a time with Sigmund Freud, developed a system of psychology which has been highly influential in the twentieth century. The claims he makes for his psychology clearly intrude on the territory of Scripture. He wants to understand human nature. But the Bible has already given us God’s view of human nature. He wants to tell us what life should mean, centuries after God has revealed to us what life does mean. We need to consider his system carefully in the light of Scripture.

Adler, who lived from 1870 to 1937, believed that people are motivated primarily by a desire to achieve superiority. He is particularly famous for his concept of “inferiority complex”. His system has strong roots in the determinism of Freud, as Adler believed that an individual’s “style of life” is pretty well set in concrete by age four or five. However, in his later years Adler developed the idea of the “creative self,” moving toward the humanistic psychologies. Adler believed change to be a long, difficult process that necessitated an exploration of childhood memories to uncover the mistaken “style of life.” Throughout his writings, the development of “social feeling” is another emphasis that cannot be missed. Adler continually stressed the necessity of living in community with other human beings, rather than living solely in pursuit of isolated selfish interests.

Although Adler does not demonstrate the extreme, blasphemous hostility to Christianity that is found in Freud, Ellis, and others, he is nevertheless far from Scripture in his religious beliefs. His view of Scripture and its authority is distorted, and he thoroughly misunderstands man’s creation in the image of God. While certain aspects of his system might be initially appealing to believers, such as his emphasis on considering the needs of others, we must not be deceived into thinking that Adler has any new truths about human nature that supplement God’s Word.

The Bible tells us that God created man (both male and female) in His image, but man has fallen into sin. Human nature is therefore sinful. However, those who trust in Christ as Savior are redeemed from the impact of sin. While continuing to struggle with sin to some degree, the believer is called a new creation in Christ. He has a new nature.

Scripture also reveals to us how God expects us to live, before Him and in relationship to others. We are fully accountable to Him for our thoughts and actions. God alone is able to judge the thoughts and intentions of the inner man, the heart.

Adler’s psychology addresses the same issues. If any one of his answers lines up with the Bible, it is redundant. If it conflicts with Scripture, it is in error. What exactly does Adler tell us about the nature of man and how he ought to live?

The purpose of Understanding Human Nature (UHN) is stated as follows:

“This book is an attempt to acquaint the general public with the fundamentals of Individual Psychology. At the same time it is a demonstration of the practical application of these principles to the conduct of one’s everyday relationships, not only to the world, and to one’s fellow men, but also to the organization of one’s personal life…. The purpose of the book is to point out how the mistaken behavior of the individual affects the harmony of our social and communal life…to teach the individual to recognize his own mistakes…to show him how he may effect a harmonious adjustment to the communal life.” (p. IX, UHN)

This statement of purpose clearly shows that Adler has ventured into biblical territory. In doing so he is trespassing!

Adler wants to do more than develop “occasional experts” in the understanding of man. He wants every person to understand human nature (p. 15, UHN). He believes that “human beings would live together more easily if their knowledge of human nature were more satisfactory” (p. 16, UHN). This assumes that mere knowledge, apart from the working of God’s Spirit in the hearts of men, is sufficient for such radical changes. Adler ignores the riches of biblical teaching when he makes the claim that:

But indeed there is such a “tradition”: God’s infallible Word.

Adler assumes that man, apart from and even in place of God, is able to know himself:

“The best knower of the human soul will be the one who has lived through passions himself. The contrite sinner seems as valuable a type in our day and age as he was in the days when the great religions developed.” (p. 22, UHN)

Note the unstated assumption here that even when “the great religions developed,” man could understand his own nature without any kind of divine revelation. Such a view cannot be reconciled with Scripture.

“Of all the organs with which a child attempts the conquest of the world the sense organs are the most important in the determination of the essential relationships to the world…. We can therefore understand a human being only when we know with what sense organs or organ-systems he approaches the world, because all his relationships are colored by this fact.” (p. 48, UHN)

Scripture, however, contrasts the outward appearance with the inner man. David may have seemed an unlikely candidate to be God’s anointed ruler over Israel. One of his older brothers looked more suitable to the prophet Samuel:

“But the Lord said to Samuel, ‘Do not look at his appearance or at the height of his stature, because I have rejected him; for God sees not as man sees, for man looks at the outward appearance, but the Lord looks at the heart.'” (1 Samuel 16:7)

Soul. Adler should have remained silent concerning the soul of man. His inadequate understanding reflects his lack of the indwelling Holy Spirit.

Adler proposes the existence of man’s soul from the fact that humans are able to freely move about:

“We attribute a soul only to moving, living organisms. The soul stands in innate relationship to free motion…. There is a strict corollary between movement and psychic life. This constitutes the difference between plant and animal.” (p. 27, UHN)

A similar statement emerges in What Life Should Mean to You (LM):

“All moving beings…can foresee and reckon up the direction in which to move; and this fact makes it necessary to postulate that they have minds or souls…the mind governs the body–it sets the goal for movements.” (p. 26, LM)

The Bible does use the term “soul” in the Genesis creation account to refer to all animated creatures, encompassing animals as well as man. However, it is clear from an overview of the entire Scripture that the soul or spirit of man is a dimension not present in other creatures. God’s mode of creation took a dramatic turn when He completed the first six days of His work. When He created the heavens and the earth, and the creatures in the sky, sea, and land, He said, “let there be….” But when He created the first man, He formed him from the dust of the earth and breathed into his nostrils. Scripture undeniably reveals two parts to man, the physical body and the immaterial part (soul or spirit). These two parts are separated at death.

Adler, ignoring God’s creation of man, goes on to state that:

“…the soul arises from a hereditary substance which functions both physically and psychically. Its development is entirely conditioned by social influences.” (p. 223, UHN)

These basic influences, according to Adler, are primarily “the rule of communal life” and “individual striving for power and superiority” (p. 223, UHN). We will see later how social feeling and the striving for superiority are crucial pillars of Adler’s system. For the moment, note this basic statement about the fundamental motivations in the heart of man:

“Two great tendencies dominate all psychic phenomena. These two tendencies, the social feeling, and the individual striving for power and dominion, influence every human activity and color the attitude of every individual in his striving for security, in his fulfillment of the three great challenges of life: love, work, and society.” (p. 102, UHN)

In spite of the emphasis seen above on heredity and social influences, Adler attributes to man’s soul the ability to perceive the future:

“The soul has the faculty not only of perceiving what actually exists in reality, but also of feeling, of guessing, what will occur in the future.” (p. 59, UHN)

Goals and Purpose. Adler’s view of the purpose of man’s “psychic life” is one that is limited to earth, ignoring any hope of immortality:

“The psychic life is a complex of aggressive and security- finding activities whose final purpose is to guarantee the continued existence on this earth of the human organism, and to enable him to securely accomplish his development…. We cannot imagine a psychic life which is isolated. We can only imagine a psychic life bound up with its environment.” (p. 28, UHN)

“The psychic life of man is determined by his goal…all phenomena of the soul life may be conceived as preparations for some future situation.” (p. 29, UHN)

Adler believes that “few people know exactly what their goal is” but “on the other hand, it is quite possible to deduce what the goal of an individual must be from his present activities” (p. 30, UHN). In addition, he teaches that man’s “goal,” unknown though it may be, determines him to such a degree that his will is no longer free:

“Nowadays it is believed that human will is not free. It is true that human will becomes bound as soon as it entangles itself or binds itself to a certain goal.” (p. 29-30, UHN)

The Scripture speaks of man as either worshipping God the Creator–or some aspect of the creation (Romans 1). The unbeliever, while fully responsible before God, has a will that is enslaved to sin (Romans 8:7-8). The Christian has been set free from this slavery to sin, so that he is able to will what is good and pleasing to God. The unbeliever’s enslavement to sin is not equivalent to the psychic determinism in Adler (or Freud), nor is the believer’s freedom the equal of Adler’s “creative self,” which helped pave the way to humanistic psychological systems.