by Nick Bilton:  By now, seeing one of Google’s experimental, driverless cars zipping down Silicon Valley’s Highway 101, or parking itself on a San Francisco street, is not all that unusual. Indeed, as automakers like Audi, Toyota and Mercedes-Benz make plans for self-driving vehicles, it is only a matter of time before such cars become a big part of the great American traffic jam. 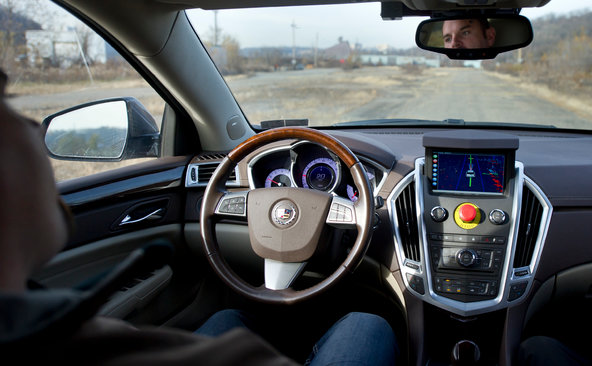 A self-driving car at Carnegie Mellon. Researchers have been contemplating how cities could change if our cars start driving for us, including having narrower streets because parking spots might not be necessary.

While driverless cars might still seem like science fiction outside the Valley, the people working and thinking about these technologies are starting to ask what these autos could mean for the city of the future. The short answer is “a lot.”

Imagine a city where you don’t drive in loops looking for a parking spot because your car drops you off and scoots off to some location to wait, sort of like taxi holding pens at airports. Or maybe it is picked up by a robotic minder and carted off with other vehicles, like a row of shopping carts.

Inner-city parking lots could become parks. Traffic lights could be less common because hidden sensors in cars and streets coordinate traffic. And, yes, parking tickets could become a rarity since cars would be smart enough to know where they are not supposed to be.

As scientists and car companies forge ahead — many expect self-driving cars to become commonplace in the next decade — researchers, city planners and engineers are contemplating how city spaces could change if our cars start doing the driving for us. There are risks, of course: People might be more open to a longer daily commute, leading to even more urban sprawl.

That city of the future could have narrower streets because parking spots would no longer be necessary. And the air would be cleaner because people would drive less. According to the National Highway Traffic Safety Administration, 30 percent of driving in business districts is spent in a hunt for a parking spot, and the agency estimates that almost one billion miles of driving is wasted that way every year.

“What automation is going to allow is repurposing, both of spaces in cities, and of the car itself,” said Ryan Calo, an assistant professor at theUniversity of Washington School of Law, who specializes in robotics and drones.

Harvard University researchers note that as much as one-third of the land in some cities is devoted to parking spots. Some city planners expect that the cost of homes will fall as more space will become available in cities. If parking on city streets is reduced and other vehicles on roadways become smaller, homes and offices will take up that space. Today’s big-box stores and shopping malls require immense areas for parking, but without those needs, they could move further into cities.

The Autonomous Intersection Management project, created by the Artificial Intelligence Laboratory at the University of Texas at Austin, imagines cities where traffic lights no longer exist but sensors direct the flow of traffic. Although a video showing off the automated traffic intersection looks like total chaos, the researchers insist that such intersections will reduce congestion and fuel costs and can allow cars to drive through cities without stopping.

Of course, getting to a utopian city will take a little longer than circling the block looking for a spot. A spokesman for Audi said a fully automated car would not be available until the end of the decade. And the regulatory issues to be addressed before much of this could come true are, to put it mildly, forbidding.

But the pieces are starting to fall into place, at least enough to excite future-minded thinkers. Last year, Jerry Brown, the governor of California, signed legislation paving the way for driverless cars in California, making it the third state to explicitly allow the cars on the road. And federal agencies are starting to consider their impact. In May the Transportation Department made its first formal policy statement on autonomous vehicles, encouraging cities to allow testing of driverless cars.

But to some, this promise — or overpromise as the case may be — sounds familiar.

“The future city is not going to be a congestion-free environment. That same prediction was made that cars would free cities from the congestion of horses on the street,” said Bryant Walker Smith, a fellow at the Center for Internet and Society at Stanford Law School and a member of the Center for Automotive Research at Stanford. “You have to build the sewer system to accommodate the breaks during the Super Bowl; it won’t be as pretty as we’re envisioning.”

Mr. Smith has an alternative vision of the impact of automated cars, which he believes are inevitable. Never mind that nice city center. He says that driverless cars will allow people to live farther from their offices and that the car could become an extension of home.

“I could sleep in my driverless car, or have an exercise bike in the back of the car to work out on the way to work,” he said. “My time spent in my car will essentially be very different.”

“Driverless cars won’t appear in a vacuum,” Mr. Smith said. Other predictions for the future city imagine fewer traditional-looking cars. Taking their place will be drones and robots that deliver goods.

Oh, and that food-delivery car double-parked outside? That, Mr. Calo said, will be replaced by a delivery drone.