Samuel Hahnemann was born Christian Friedrich Samuel Hahnemann in Saxony Germany in 1755.  He was a medical doctor and through observation and after having practiced orthodox medicine Hahnemann’s concluded that the medicine of his time did about as much harm as it did good. 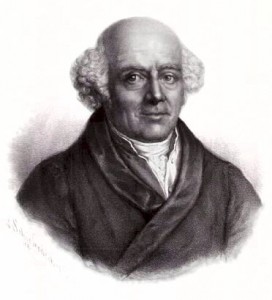 Keep in mind that this is being said at a time before the often toxic modern day chemical medicines. The reason for this now and even back then is because the practitioners do not understand the natural processes of the body and overcomplicate what is sometimes very simple.

Many of the practitioners of that time tried to follow the methods and remedies used by Paracelsus without understanding what Paracelsus taught or the remedies he used.

You had a medical practice that did not have a clear philosophical grasp of what it was going nor did it have an understanding of the remedies it was using. In that sense not much has really changed.

Hahnemann said, “My sense of duty would not easily allow me to treat the unknown pathological state of my suffering brethren with these unknown medicines. The thought of becoming in this way a murderer or malefactor towards the life of my fellow human beings was most terrible to me, so terrible and disturbing that I wholly gave up my practice in the first years of my married life and occupied myself solely with chemistry and writing.”

While translating A Treatise on the Materia Medica, Hahnemann encountered the claim that Cinchona; the bark of a Peruvian tree, also known as cinchona bark, Jesuit’s bark or Peruvian bark, was effective in treating malaria because of its astringency. Hahnemann claimed that other astringent substances are not effective against malaria so why should this substance be? He began to investigate Cinchona’s effect on the human organism by self-application. He noticed that the Cinchona evoked malaria-like symptoms in himself, and concluded that it would do so in any healthy individual. This process was called “proving the remedy” From this he postulated the healing principle: “that which can produce a set of symptoms in a healthy individual, can treat a sick individual who is manifesting a similar set of symptoms.”This principle, like cures like, became the basis for an approach to medicine which he gave the name homeopathy. Interestingly, Paracelsus made the same statement over 150 years earlier. It is interesting to note that pure allopathy is based on the principle of using opposites to cure opposites. Modern medicine is often referred to as being allopathic when it fact it is not. Pure herbalism as it is practiced in China is the best example of the near perfect application of the allopathic principle.

Hahnemann continued to test various substances to see what effect or symptoms they would produce in a healthy individual and by extension specific ills they would heal. Because of the effects produced by ingesting these various substances Hahnemann concluded that the noticeable changes in the organism were produced by the toxic effects of the substances. Paracelsus himself had stated that there is poison in all known substances and the difference between a remedy and a poison is in the dosing.

Hahnemann then attempted to overcome the negative effects by exploring systematic dilutions of the compounds he was testing based on a decimal system. The degree of dilution was called “potentizing.” When diluted the substances were “succussed” which is nothing more than a vigorous shaking. He observed that even when systematically diluted the substances were still effective in producing symptoms. Homeopathy proved its efficacy in 1831 when there was an outbreak of cholera. Using his homeopathic treatments Hahnemann had a 96% success rate, compared to the 41% of the conventional medicine of that time. He gained world wide renown and doctors came from all over to be instructed by him. Clearly, if it did not work – no one would have noticed.

Samuel Hahnemann documented his discoveries in his three major books:

1) Organon of Homeopathic Medicine – where we see the fundamentals of homeopathy laid out,
2) Materia Medica Pura – which records the exact symptoms of the remedy proving,
3) The Chronic Diseases, Their Peculiar Nature and Their Homeopathic Cure – where Hahnemann shows us how the natural diseases become chronic in nature when suppressed by improper treatment, and a less known work:

A Medical Historical Dissertation on the Helleborism of the Ancients.

What is not commonly known about Hahnemann was that he, like all of the great healers, would not treat or help just anyone or everyone. Money was not their motivator. This was done not out of malice but out of genuine caring. Apart from inherited conditions or ailments that a person was born with all other ailments are the result of habits, temperament or mindset – things that were within the control of any normal person. That being the case, it was felt that by easily removing someone’s symptoms without putting the onus on the sick person to reform in some way, they would have less reason to resist or otherwise reform the unwholesome habits that had made them sick in the first place; ultimately doing the ailing person more harm than good.

Some ailments brought on through lasciviousness were particularly nasty. To remove them quickly would do more harm than good as they were an external manifestation of that person’s state of mind or the condition of their soul. Their own ailments gave them a reason to reform.

Hahnemann also prescribed a very specific diet that was similar to the Biblical “pulse out of the book of Daniel,” that those who he would treat had to follow. If they would not make the effort, he would not continue to help them.

A Materia Medica is like a dictionary of homeopathic remedies. They are expensive so buying them used for a lot less makes good sense.
It is very interesting to note that even though anyone who has ever tried homeopathy without having any medical or scientific training can and have been able to reproduce Hahnemann’s effects but, some of the modern medical establishments have maintained that these effects have never been duplicated in clinical trials, and due to this have been universally abandoned by modern medicine. Yet, the University of Frieburg, Germany has recently proven otherwise. Furthermore, it would be a very easy thing to prove if scientific testing were conducted under completely unbiased conditions.

At the turn of the 20th century in the United States almost all of the medical hospitals and institutions of medical training were based on homeopathic training and practice. With the advent of modern chemical based pharmacology that was being pushed buy such notables as Rockefeller and Carnegie with their great reach and influence, they were all systematically shut down along with the many health spas that were all over the United States at that time.

To better understand Homeopathics it should also be mentioned that since the inspired research and writing of Samuel Hahnemann more inspired information has come into being explaining in very fine terms how and why homeopathic remedies work. To see this information click here.

Please note that the book selection below is comprised mainly of the works of Samuel Hahnemann himself. There are hundreds of books on homeopathy available. If you click on any link below you can explore the other many publications on the subject of Homeopathy.

We have always found it enlightening to read the works of the originators of their art. Not that further refinements could not be made but, an insight into the mindset that inspired them often offers much more than what followed them. For this reason some effort has been made of offer books written by Samuel Hahnemann himself. There will be many other books on the subject but only with a firm understanding of basic principles can anyone decide which are best.