Faster Than the Speed of Light?

by Danny Hakim:  HOUSTON — Beyond the security gate at the Johnson Space Center’s 1960s-era campus here, inside a two-story glass and concrete building with winding corridors, there is a floating laboratory. 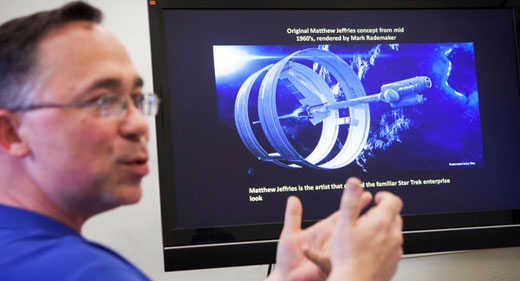 Harold G. White, a physicist and advanced propulsion engineer atNASA, beckoned toward a table full of equipment there on a recent afternoon: a laser, a camera, some small mirrors, a ring made of ceramic capacitors and a few other objects.

He and other NASA engineers have been designing and redesigning these instruments, with the goal of using them to slightly warp the trajectory of a photon, changing the distance it travels in a certain area, and then observing the change with a device called an interferometer. So sensitive is their measuring equipment that it was picking up myriad earthly vibrations, including people walking nearby. So they recently moved into this lab, which floats atop a system of underground pneumatic piers, freeing it from seismic disturbances.

The team is trying to determine whether faster-than-light travel — warp drive — might someday be possible.

“Space has been expanding since the Big Bang 13.7 billion years ago,” said Dr. White, 43, who runs the research project. “And we know that when you look at some of the cosmology models, there were early periods of the universe where there was explosive inflation, where two points would’ve went receding away from each other at very rapid speeds.”

Einstein famously postulated that, as Dr. White put it, “thou shalt not exceed the speed of light,” essentially setting a galactic speed limit. But in 1994, a Mexican physicist, Miguel Alcubierre, theorized that faster-than-light speeds were possible in a way that did not contradict Einstein, though Dr. Alcubierre did not suggest anyone could actually construct the engine that could accomplish that.

His theory involved harnessing the expansion and contraction of space itself. Under Dr.Alcubierre’s hypothesis, a ship still couldn’t exceed light speed in a local region of space. But a theoretical propulsion system he sketched out manipulated space-time by generating a so-called “warp bubble” that would expand space on one side of a spacecraft and contract it on another.

“In this way, the spaceship will be pushed away from the Earth and pulled towards a distant star by space-time itself,” Dr. Alcubierre wrote. Dr. White has likened it to stepping onto a moving walkway at an airport.

But Dr. Alcubierre’s paper was purely theoretical, and suggested insurmountable hurdles. Among other things, it depended on large amounts of a little understood or observed type of “exotic matter” that violates typical physical laws.

Dr. White believes that advances he and others have made render warp speed less implausible. Among other things, he has redesigned the theoretical warp-traveling spacecraft — and in particular a ring around it that is key to its propulsion system — in a way that he believes will greatly reduce the energy requirements.

He is quick to offer up his own caveats, however, saying his warp research is akin to a university science project that is just trying to prove that a microscopic warp bubble can be detected in a lab. ”We’re not bolting this to a spacecraft,” he said of the warp technology.

Dr. White was an engineer with a background in the aerospace industry when he came to NASA in 2000, starting his career at the agency by operating the arms of space shuttles. He got his doctorate in physics from Rice University in 2008, and now works on a range of projects aimed at taking NASA beyond the fiery rockets that have long characterized space travel.

For NASA, Dr. White’s warp speed experiments represent a rounding error in its budget, with about $50,000 spent on equipment in an agency that spends nearly $18 billion annually. The agency is far more focused on more achievable projects — building the next generation Orion series spacecraft, working on the International Space Station and preparing for a planned future mission to capture an asteroid.

But it has made internal resources available for the project and freed up other engineers to assist Dr. White. It has also restored the pneumatic system in the laboratory Dr. White is using, to allow it to float. The lab was once used to test equipment for Apollo missions and has control panels underneath it that look like they belong in a fallout shelter that time forgot.

Steve Stich, the deputy director of engineering at the Johnson Space Center, said, “You always have to be looking towards the future.” He held up his iPhone.

“Forty years ago, this was ‘Star Trek,’ Captain Kirk talking on a communicator whenever he wanted to,” he said. “But today it exists because people made the battery technology that allows this device to exist, worked on the software technology, worked on the computational technology, the touch screen.”

Theoretically, a warp drive could cut the travel time between stars from tens of thousands of years to weeks or months. But we should probably not book reservations anytime soon.

“My personal opinion is that the idea is crazy for now,” said Edwin F. Taylor, a former editor of The American Journal of Physics and senior research scientist at M.I.T. “Check with me in a hundred years.”

But Richard Obousy, a physicist who is president of Icarus Interstellar, a nonprofit group composed of volunteers collaborating on starship design, said “it is not airy-fairy, pie in the sky.”