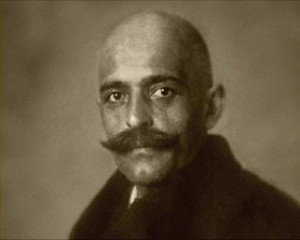 Example of Teaching
“The chief means of happiness in this life is the ability to consider externally always, internally never.”

Life Is Real Only Then, When I Am (Compass)

Beelzebub's Tales to His Grandson: All And Everything: 1st Series (Compass)

George Ivanovitch Gurdjieff was born 1877 in Alexandropol, Armenia, Russian Empire and died Oct. 29, 1949, in Neuilly, near Paris. He was a Greco-Armenian mystic and philosopher who founded an influential quasi-religious movement. As a youth, growing up in a cultural crossroad between Turkey, Russia, Armenia and Greece, he was subject to a great variety of influences which opened his vision.

For 20 years, in his early life, he traveled in such places as Egypt, Russia, Uzbekistan, Tibet and other places in Asia.  His travels and research exposed him to ancient rituals, music, and dance which had the potential to lead the participants to an experience of higher consciousness. He began teaching in Europe and later in the USA, this included movements which he called “Sacred Dances” to the students who followed him.  A disciple named P.D. Ouspensky introduced Gurdjieff’s teachings to Western readers in an understandable intellectual form.

After attracting pupils and disciples, he established a school for spiritual development called The Institute for the Harmonious Development of Man.  He taught “The Work” or “the Method”.  His method for awakening one’s consciousness is different from that of the fakir, monk or yogi, so his discipline is also called the “Fourth Way”.  He described his teaching as being “esoteric Christianity”.

His teachings related to self-awareness in one’s daily life and humanity’s place in the universe.  Ritual exercises and dance were part of the regimen, often accompanied by music composed jointly by Gurdjieff and an associate, the composer Thomas de Hartmann. Performers from the institute appeared in Paris in 1923, in three U.S. cities the following year and brought considerable attention to Gurdjieff’s work.

Gurdjieffian Thought in the New Age

Gurdjieff ‘s Ideas About Man and the Universe

The Fourth Way an Introduction to the Teachings of Gurdjieff

Gurdjieff and Steve Jobs – A Documentary