Let’s Shake Up the Social Sciences

by Nicholas Christakis:  TWENTY-FIVE years ago, when I was a graduate student, there were departments of natural science that no longer exist today. Departments of anatomy, histology, biochemistry and physiology have disappeared, replaced by innovative departments of stem-cell biology, systems biology, neurobiology and molecular biophysics. Taking a page from Darwin, the natural sciences are evolving with the times. The perfection of cloning techniques gave rise to stem-cell biology; advances in computer science contributed to systems biology. Whole new fields of inquiry, as well as university departments and majors, owe their existence to fresh discoveries and novel tools. 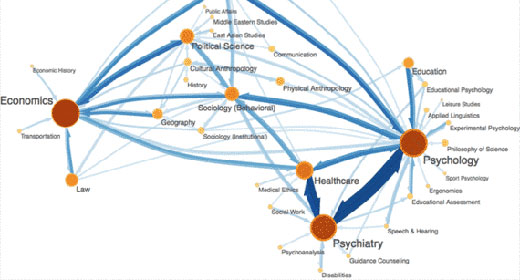 In contrast, the social sciences have stagnated. They offer essentially the same set of academic departments and disciplines that they have for nearly 100 years: sociology, economics, anthropology, psychology and political science. This is not only boring but also counterproductive, constraining engagement with the scientific cutting edge and stifling the creation of new and useful knowledge. Such inertia reflects an unnecessary insecurity and conservatism, and helps explain why the social sciences don’t enjoy the same prestige as the natural sciences.

One reason citizens, politicians and university donors sometimes lack confidence in the social sciences is that social scientists too often miss the chance to declare victory and move on to new frontiers. Like natural scientists, they should be able to say, “We have figured this topic out to a reasonable degree of certainty, and we are now moving our attention to more exciting areas.” But they do not.

I’m not suggesting that social scientists stop teaching and investigating classic topics like monopoly power, racial profiling and health inequality. But everyone knows that monopoly power is bad for markets, that people are racially biased and that illness is unequally distributed by social class. There are diminishing returns from the continuing study of many such topics. And repeatedly observing these phenomena does not help us fix them.

Such interdisciplinary efforts are also generating practical insights about fundamental problems like chronic illness, energy conservation, pandemic disease, intergenerational poverty and market panics. For example, a better understanding of the structure and function of human social networks is helping us understand which individuals within social systems have an outsize impact when it comes to the spread of germs or the spread of ideas. As a result, we now have at our disposal new ways to accelerate the adoption of desirable practices as diverse as vaccination in rural villages and seat-belt use among urban schoolchildren.

It is time to create new social science departments that reflect the breadth and complexity of the problems we face as well as the novelty of 21st-century science. These would include departments of biosocial science, network science, neuroeconomics, behavioral genetics and computational social science. Eventually, these departments would themselves be dismantled or transmuted as science continues to advance.

Some recent examples offer a glimpse of the potential. At Yale, the Jackson Institute for Global Affairs applies diverse social sciences to the study of international issues and offers a new major. At Harvard, the sub-discipline of physical anthropology, which increasingly relies on modern genetics, was hived off the anthropology department to make the department of human evolutionary biology. Still, such efforts are generally more like herds splitting up than like new species emerging. We have not yet changed the basic DNA of the social sciences. Failure to do so might even result in having the natural sciences co-opt topics rightly and beneficially in the purview of the social sciences.

New social science departments could also help to better train students by engaging in new types of pedagogy. For example, in the natural sciences, even college freshmen do laboratory experiments. Why is this rare in the social sciences? When students learn about social phenomena, why don’t they go to the lab to examine them — how markets reach equilibrium, how people cooperate, how social ties are formed? Newly invented tools make this feasible. It is now possible to use the Internet to enlist thousands of people to participate in randomized experiments. This seems radical only because our current social science departments weren’t organized to teach this way.

For the past century, people have looked to the physical and biological sciences to solve important problems. The social sciences offer equal promise for improving human welfare; our lives can be greatly improved through a deeper understanding of individual and collective behavior. But to realize this promise, the social sciences, like the natural sciences, need to match their institutional structures to today’s intellectual challenges.

Nicholas A. Christakis, a physician and sociologist at Yale University, is a co-director of the Yale Institute for Network Science.