When respected television broadcaster Bill Moyers suggested to his producers a series of dialogues with mythologist Joseph Campbell, they lambasted the idea.  The public wouldn’t be interested, Moyers was told. 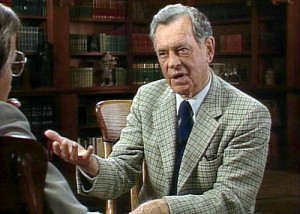 Undaunted, Moyers went looking for his own funding and eventually produced the series. It turned out to be the most popular program in the history of public television.

Jonathan Young, one of Campbell’s associates, retells the story to illustrate the prevailing attitudes about myth and spirituality.

People will talk about sex, money, politics…anything but their spiritual journey. Not that they’re ashamed; there’s simply a shyness about discussing matters of the soul.

That, however is changing, says Young, a clinical psychologist, Joseph Campbell’s archivist and an expert on sacred stories, who was in Calgary recently for a public lecture, Mythic Stories to Live By, sponsored by the Centre for Positive Living.

He points to the popularity of a course he taught last spring via the Internet about mythology where people from all over the globe, from India to Russia to Mexico, logged on.

It’s not hard to see why people are shy about discussing their spiritual lives, Young says pointing to the office towers outside his downtown hotel.

The dominant god in the West is wealth and materialism.

But as western civilization heads into decline, there is less preoccupation with progress. In the search for meaning, people are turning inwards and towards nature to find some answers.

“That opens the door to sacred stories,” says Young.

Campbell died in 1987, but Young continues to promote his work, picking up where he left off.

He’s editing a new book, SAGA – Best New Writings on Mythology, aimed at helping people grasp the stories and myths that give meaning to the journey of life. It will be published next year by White Cloud Press.

Mythic stories used to be told around the campfire by wise village elders. Now they’re read in paperbacks during vacations or heard during ceremonial rites of passage.

Nevertheless, their lure is eternal, nourishing something deep within us.

“We reconnect with universal patterns that move the human heart and soul,” Young writes in the introduction to his new book. “In some new way, we see the richness of beauty and significance in ordinary life.”

They give us clues about how to roam the peaks and valleys of our lives.

“Mythology allows us to reconnect with dimension beyond ordinary time,” he writes. “In this moment in history, consumer values dominate the media. Ancient stories give us a chance to visit with eternal characters involved in primal adventures. This can provide perspectives that go beyond trendy concerns with possessions or appearance.”

Issues that are too large to grasp in a single lifetime become accessible. Not only do folklore and legends demonstrate how to draw on divine energy, but they also show how to align with nature.

All stories, says Young, have symbolic meaning, hidden wisdom that illuminates the soul’s yearnings to go home to its beloved.

Stories teach how to pay attention to everything that happens in life and perceive the options available.

“One’s least honored attribute may come to the rescue on some fateful day when circumstances require that very quality,” he observes.

Coming back to the same story time after time reveals new meanings. Moreover, every person seeks to find that single story that speaks most profoundly about their own life. Ultimately, he says, “We each have the opportunity to shape a novel of great complexity that stays fascinating to the last scene.”

The wisdom found in myths and stories help to realize how everyone is part of a vast, interconnected web of being, he says.

For instance, Young recollects the famous Biblical story of the woman who lost a valuable coin. She lights a lamp and sweeps day and night until she finds it. When she finds it, she invites her friends to come and celebrate.

In those days it was the custom for women to wear coins that had been something like a dowry, Young explains in a recent article. Rediscovering Stories, in Creative Thought.

“The story is a marvelous illustration of the idea of lost self-worth regained. A precious piece of her sense that she was valuable was gone.…She had suffered diminished self-image.”

“It is like how we feel when a setback in a cherished project deflates us or a thoughtless comment gets us down. It takes some work to return to the full feeling of worthiness we had before.”

He goes on to explain how the rest of the story and its symbols contain spiritual significance. “The lighting of the lamp, for example, can have many meanings. It can suggest an openness, the guidance of a transcendent presence, which is often represented by light or flame in mythology.”

Young has made it his special mission to take stories that don’t seem to have any spiritual value and demonstrate otherwise.

While in Calgary, he talked about the Wizard of Oz, a children’s story, as a journey of initiation and discovery for adults.

Whether it’s simple stories like parables, or complex creation myths, where the imagination is allowed free rein, a whole new collection of images appear.

“This is one way the angels speak to us,” says Young. “The pass key is receptivity. If we can be open to this divine flow and reflect on the meanings it presents to us, the inner life is greatly enriched.

“It is then that we have found the lost coin.”