Gandhiji wrote the following prefatory note to this Chapter under the caption of “Darwin’s Views on Ethics”. 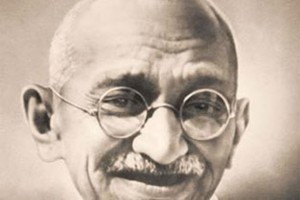 [Before summarizing this Chapter, it is necessary to give an account first of Darwin himself. Darwin was a great Englishman of the last century who made great scientific discoveries. His memory and his power of observation were amazing. He has written some books which deserve to be read and pondered. With a mass of evidence and arguments, he has shown how man came into being; how he has evolved from a particular kind of monkey. After a large number of experiments and much sifting of evidence, he realized that there was not much difference between the anatomy of man and that of the ape. Whether this conclusion is correct or not has not much to do with ethics. Besides this, Darwin has also shown how ideas of morality affect mankind. And as many scholars have faith in Darwin’s writings, our author has dealt with his views in Chapter VI]

It is noble voluntarily to do what is good and right. The true sign of man’s nobility is the fact that, instead of being driven about like a cloud before the wind, he stands firm and can do, and in fact does, what he deems proper.

Nevertheless, we ought to know the direction in which our environment disposes our instincts. We know that we are not in every way masters of our own life; there are conditions outside of us to which we have adjust ourselves. For instance, in a country where Himalayan cold prevails, we have to put on adequate clothing, whether we like it or not, in order to keep the body warm. That is, we have to act with prudence.
The question now arises: Does the influence of environment lead us to be moral? Or can it be that the forces that surround us are indifferent to morality?

At this point it becomes necessary to consider Darwin’s views. Though Darwin did not write as a moral philosopher, he has shown how close the connection is between morality and environment. Those who think that morality is unimportant and that physical strength and mental capacity are the only things that matter should read Darwin. According to him, there is an instinct of self-preservation in men as in other creatures. He also says that those who survive the struggle for existence may be regarded as successful, that is, those who are unfit to tend to extinction, but that the issue of the struggle does not depend on mere physical force.

Comparing man with the bear or the buffalo, we find that, in physical strength, the bear and the buffalo are superior to him; in a tussle he will surely be worsted. Nonetheless he is their superior by virtue of his intelligence. Similarly we can compare with the largest numbers or with the hardiest soldiers that wins, but the side with the ablest generals and the best strategy, though its soldiers may be fewer or less hardly. In these examples we see the superiority of intelligence.

But Darwin shows further that moral strength is even superior to physical and intellectual strength; and we can see in various ways that a man who has moral qualities lasts longer than one who is devoid of them. Some hold that Darwin taught that strength is enough; that is, those who are physically strong ultimately survive. Superficial thinkers may believe that morality is of no use. But this is not Darwin’s view at all. We find from the evidence of the early history of man that races without morality have completely disappeared. The people of Sodom and Gomorrah were extremely immoral and they are now therefore completely extinct. We can see even today how races without morality are steadily declining.

Let us now take some simple illustrations and see how at least common morality is necessary for sustaining the human race. A peaceful disposition is one element of morality. At first sight it may appear that people with a violent disposition rise in life; but a little reflection will show that, when the sword of violence falls, it may be on one’s own neck. Freedom from bad habits forms another element of morality. Statistics have proved that, at the age of thirty, intemperate persons in England are not likely to live beyond another thirteen or fourteen years, while the teetotaller’s expectation of life is seventy years. Yet another element of morality is chastity. Darwin has no children, or if they have any, they are weak. The profligate become feeble of mind, and in course of time look like idiots.

If we consider the morals of various communities, we find the same state of affairs. Among the Andaman islanders the husband looks after his wife only until their child is weaned and begins to move about, and he then abandons her. That is, they do not have the quality of altruism, and utter selfishness prevails. The result is that the race is gradually dying out. Darwin shows that the altruistic instinct is present, to some extent, even in animals: timid birds display strength in defending their young. This shows that, if there had been no selflessness among animals, we should have in the world scarcely any life other than grass and poisonous flora. The main distinction between man and other animals is that man is more selfless than the animals. He has sacrificed his life for others in proportion to his strength, that is, for his offspring, for his family, his community and his country.

Darwin clearly shows that moral strength is supreme. The ancient Greeks had greater intelligence than the Europeans of today, but when the former gave up morality, their intelligence became their enemy, and no trace of them remains today. Nations are sustained neither by wealth nor by armies, but by righteousness alone. it is the duty of man to bear this truth in mind and practice altruism, which is the highest form of morality.