By Tom Jacobs (Santa Barbara News-Press 3/21/04) Joseph Campbell, who was born 100 years ago this Friday, is best known for his gentle admonition to “Follow your bliss.” 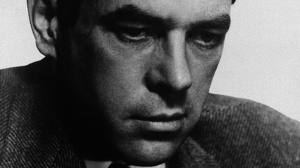 But since that three-word phrase has been widely misinterpreted, it is perhaps better to celebrate the birthday of the master mythologist with a different quote.

“The latest incarnation of Oedipus, the continued romance of Beauty and the Beast,” he wrote, “stands this afternoon on the corner of 42nd Street and Fifth Avenue, waiting for the light to change.”

That sidewalk scene embodies the essence of Joseph Campbell. As he gazed out of the window of his modest Manhattan apartment, he saw myths everywhere, playing themselves out through the lives of everyday people. Thanks to his engaging personality and graceful writing, millions of others began to see them, too.

Mr. Campbell, whose personal library is housed at Pacifica Graduate Institute in Carpinteria, was a true rarity an academic who connected with the public, and a rigorous scholar who was comfortable exploring the realm of mysticism. Through his books, television appearances and the movies that were inspired by his scholarship — does anyone remember a 1977 art-house hit called “Star Wars”? — he transformed mythology from a musty academic pursuit into a popular path leading to a richer understanding of ourselves and our world.

Myths, he informed us, are not old and dead, but alive and vital. Through them, we learn the norms of our culture, obtain valuable clues as to how to navigate our way through life, and — if we are open to seeing it — even get a glimpse of the divine.

“He showed us that the old stories apply to contemporary living,” added psychologist Jonathan Young, who served as Mr. Campbell’s assistant on a number of visits to Santa Barbara. “He would tell a tale from thousands of years ago and make it clear that it is about our own lives, our own times.”

Born outside New York City on March 26, 1904, Joseph Campbell’s introduction to rituals and symbolism occurred in the Catholic Church, where he served as an altar boy. Fascinated by the Buffalo Bill Wild West Show at Madison Square Garden, he spent much of his boyhood reading books about American Indians. In a sense, his cross-cultural studies of mythology had already begun.

After earning degrees in English and medieval literature from Columbia University, Mr. Campbell spent a year in Paris, where he became intensely interested in the novels of James Joyce. He approached and ultimately befriended Joyce’s publisher, Sylvia Beach, who explained to him the novelist’s idea of the “monomyth.”

That concept — that there is a single, overarching story that every human being lives out, regardless of race, status or culture — would prove critical in Mr. Campbell’s thinking.

After a year in Munich, where he read Freud and Jung, and a visit to California, where he met John Steinbeck, Mr. Campbell returned to New York and began a 38-year stint as a professor of literature at Sarah Lawrence College.

His students were all women, and he discovered early on that they were interested in the relationship between what these mythologies of ancient cultures and the actuality of their lives. That’s when he really started to shape his material into what he later called the “myths we live by.” That material found its definite form in his 1949 best seller, “The Hero With a Thousand Faces.”

Using James Joyce’s idea of the monomyth and anthropologist Arnold van Gennep’s outline of rites of passage, he recounted what he called the “hero’s journey” myth — a tale of triumph and transformation that can be found in literally every culture on earth.

Mr. Campbell did not restrict the term “hero” to warrior or lifesaver; he used it to describe anyone who had the courage to follow his or her calling, obtain the necessary knowledge and skills, and then use that wisdom and experience for the benefit of his or her people. For him, slaying the dragon or other monster — a regular feature of these stories — was symbolic of overcoming the self-centered demands of the ego.

Mr. Campbell’s concept of the hero’s journey intrigued film director George Lucas, who used it as the foundation of his original “Star Wars” trilogy. As Mr. Young points out, Luke Skywalker is on what Mr. Campbell called “an initiatory quest” — a dangerous journey on which he is forced to face his own dark side and learn how to align himself with the wisdom of the universe, which Mr. Lucas called “the force.”

Mr. Campbell’s own hero’s journey consisted of a two-part quest to compare, contrast and examine the similarities in the myths of many cultures; and to explain to the public how myths function and why they are important. This dual role of scholar and popularizer led, not surprisingly, to some professional jealousy. Some colleagues complained that he was distorting and oversimplifying material in order to prove his thesis. Others disliked his interpretations of these stories as symbolic of inward, psychological journeys.

“Scholars who are more historically oriented, who prefer to look at folklore and mythologies as mirrors of their own times, say it isn’t fair to the stories to apply them to contemporary living,” said Mr. Young. “In terms of fully understanding the stories with perfect accuracy, they’re probably right. But the mythic imagination is certainly alive and well today. It’s in ‘The Lord of the Rings.’ It’s in ‘Big Fish.’ Campbell’s claim of its universality, which is a point of controversy, sure seems to hold up.”

Mr. Campbell also made enemies among religious leaders. In spite of his Catholic upbringing, he saw the church — and indeed all Western religions — as hopelessly literal in their thinking. He considered the Old testament problematic, in that it portrays a deity who favors one group of people and sanctions violence against their enemies. (That destructive mythology — the conviction that God is on our side — is, needless to say, alive and well today across much of the globe.) He saw the New testament not as literal truth, but as one version of mythic stories that can be found in many cultures, such as the virgin birth.

The Pacifica Graduate Institute invited Mr. Campbell to town, beginning in the late 1970s. The first seminar was at the Unitarian Church. There were 20 in attendance. In spite of this weak turnout, Mr. Campbell agreed to come back the following year, and ended up returning once or twice annually through 1985. Attendance gradually grew, and after several years the seminars were moved to the La Casa De Maria retreat center in Montecito.

“They were usually in the chapel,” Mr. Young recalled. “There is a big cross. He would usually start by saying, ‘Let’s honor the tradition here that’s visibly present,’ and talk about the symbolism of the cross. He saw it as the intersection of two kinds of time the linear time through which we live our lives, and eternal time. The place where they meet is a the experience of enlightenment, a mystical moment.”

Mr. Young agreed, calling him “the most charming man I ever met. I noticed how generous and humble he was in person. I remember I’d pick him up at the airport, and he’d have two suitcases. One would have three or four items of clothing; the other would be filled with books. His scholarship was his meditation.”

If Mr. Campbell was relaxed on his visits here, it may be because his ideas were more readily accepted in California than they were in New York. He saw much wisdom in Jungian psychology, and his studies were cited as evidence of the psychologist’s concept of the “collective unconscious.”

While Mr. Campbell was an agnostic on that point, the association nonetheless bothered much of the East Coast intellectual elite, which worshipped Freud (think of the classic Woody Allen movies) but found Jung too mystical.

“The more popular Joseph Campbell became in California, the less esteem he was held in New York,” Mr. Young noted.

Television journalist Bill Moyers found himself entranced by Mr. Campbell’s ideas. In 1986 and ’87, he sat down with the mythologist for 24 hours of interviews, most of which were recorded at George Lucas’ Skywalker Ranch in Northern California. Their final talk took place at the American Museum of Natural History in New York, where Mr. Campbell saw his first American Indian artifacts as a boy.

Mr. Campbell died on Oct. 30, 1987, at age 83. Mr. Moyers’ interviews, edited down to six one-hour broadcasts, premiered on PBS a little over a month later. They quickly became one of the most-watched shows in the network’s history, and Mr. Campbell’s books began to sell at a rate they had never reached while he was alive.

While Mr. Campbell would no doubt be pleased with that, he never ached for greater recognition during his lifetime. “He never sought money or fame, and he never made much money,” Mr. Young said. “He and his wife (dancer and choreographer Jean Erdman, a former student of his at Sarah Lawrence) lived in a tiny one-bedroom apartment — and the bedroom was his study. They slept on the couch. He didn’t have much, but he had everything.”

Which brings us back to the Campbell phrase that has been most widely circulated in the years since his death “Follow your bliss.”

“Both his critics and some of his fans have misunderstood the phrase,” said Mr. Young. “It isn’t, ‘Go have a good time.’ It’s, ‘Pay attention to the still, small voice — to that unique calling that seems to know your name.’

“It is the seeker’s life. It can be a life of incredible hardship and sacrifice. But there is a kind of joy in being in sync with your nature, with a sense of purpose.”