by Reed McManus:  HOORAY FOR AMERICAN CARS. I say that not as a knee-jerk red-white-and-blue jingoistic American consumer—in fact, only one of the five cars I’ve owned was made in the USA (an unbreakable 1969 Dodge Dart)—but because Detroit’s own Chevrolet is setting the bar when it comes to plug-in hybrid vehicles. Chevy’s Volt, now in its third year, remains the standard for cars that combine plug-in battery-electric power with a gas engine.

The idea that a car can run some miles on tailpipe-emission-free electric power (and be recharged at will) and then switch seamlessly to a gasoline engine to continue 400 or so miles hits home with environmentally conscious drivers who, like many Americans, were raised on the intoxicating idea that cars reflect the liberating effect of the open road. You can help reduce climate change-causing emissions, air pollution, and oil spills without forgoing long-distance trips.

I mulled over American know-how and marketing genius as I slipped along California’s U.S. 101 in a “crystal red” four-door Volt with library-quiet power. My commute (which I normally do by bus) is 41 miles round-trip, almost exactly what the Volt’s display suggested I could drive on battery power alone. The EPA says that the Volt can travel 38 miles on a fully charged battery, while Chevrolet suggests up to 50 miles. But the term “your mileage may vary” has never been truer than with electric vehicles. Outside temperature, how much air-conditioning and heat you use, the terrain, your driving style, and the age of the battery all affect how many miles that charge will last. 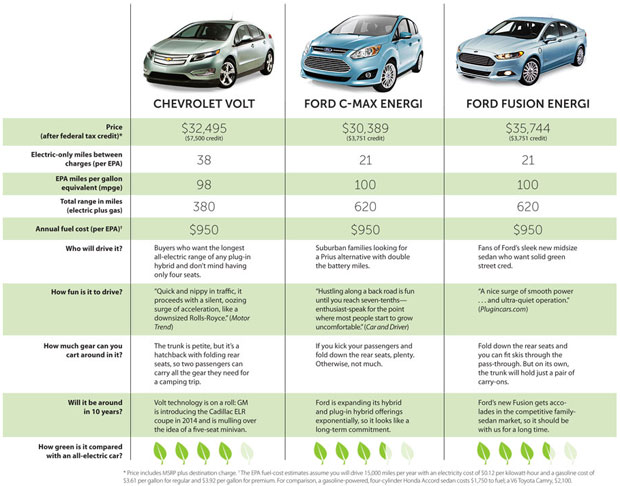 As it turns out, I made the trip to work and back on a single charge, but not without effort. Typically a lead-footed fast-lane driver, I kept the Volt’s miles per hour just over the posted speed limit of 55 (electric cars are most efficient at under 50 mph), joining a conga line of hybrid Toyota Priuses in the freeway’s slow lane. And I practiced braking more slowly and smoothly, which returns more regenerative power to the battery. The Volt has a nifty gauge—it looks like a carpenter’s level on the vertical—that lets you know when you’re accelerating or braking too hard. Keep its rotating ball centered and you maximize your environmental do-goodness (and minimize your gasoline costs). Slow and steady. Now I understand why Prius drivers drive the way they do. I got home, plugged in, and looked forward to another 41-mile all-electric challenge the next day. 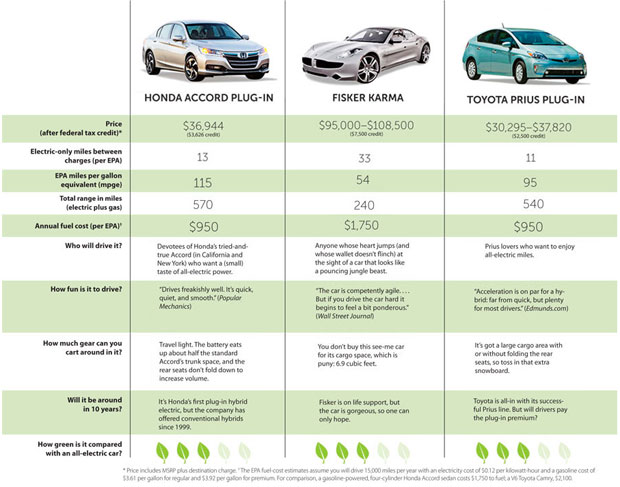 The man behind the Volt is Bob Lutz, a top executive at General Motors from 2001 to 2010 who envied how Toyota had leapfrogged Detroit with its groundbreaking Prius hybrid, introduced to the United States in 2000. Watch Chris Paine’s fine documentary Revenge of the Electric Car and you learn that Lutz, a.k.a. Mr. Horsepower, previously brought us the road-hogging Ford Explorer and Chrysler Viper. With the Volt, Lutz showed that he had seen the light. “This country has to get off oil,” he told Newsweek in 2007. “The electrification of the automobile is inevitable.”

Lutz is also a notorious global warming skeptic and was heading General Motors when, starting in 2003, it scooped up all its beloved leased EV1 electric cars and crushed them, as documented in Paine’s earlier work, Who Killed the Electric Car? So while he may not be a green purist, Lutz knew how to sell cars to Americans, and he figured that too few of us were willing to abide the limited range of an entirely electric car like the Nissan Leaf, which goes about 75 miles per charge. Hence the Volt’s backup gas engine and its combined electric and gas range of 380 miles.

SOME 14 MILLION CARS AND TRUCKS WERE SOLD in America last year, but the electric car segment remains a sliver. In 2012, some 450,000 electrified cars were sold, and that number includes now-ubiquitous conventional hybrids like the original Prius, which uses its battery power and gas engine in concert (and cannot be recharged from an outlet). Plug-in car sales last year totaled about 50,000, with the Volt in the lead with 23,461 and the Leaf in second place with 9,819. While just a few all-electric cars have entered the market since Sierra last looked at plug-ins (“Plugged In,” November/December 2012), the plug-in hybrid market is comparatively booming. In addition to the Volt, there’s Ford’s C-Max Energi crossover and its Fusion Energi sedan (each with an EPA-rated all-electric range of 21 miles); the Honda Accord Plug-in (13 miles); the Toyota Prius Plug-in (11 miles); and the sleek and pricey Fisker Karma (33 miles).

Supporters of pure-electric cars may wonder what all the fuss is about. Why get all eco-righteous over a car whose battery propels it for as little as 11 miles before surrendering to a gas engine, they say, when most all-electric vehicles travel 75 to 100 miles per charge? They have accepted their cars’ relatively limited range, perhaps being blessed with short commutes to workplaces where employers offer charging stations or possessing enough patience to plan away-from-home recharging.

My cousin loves his electric Leaf, which he drives 60 miles round-trip to his EV-friendly workplace, where he charges for free. (Not insignificantly, he also gets to drive solo in the carpool lane.) And his beach town is the kind of place you want to stay close to on weekends. The Leaf is perfect for him. But when he and his family are traveling beyond its range—say, to a remote national forest trailhead for a backpacking trip—and they don’t want to wait several hours for it to recharge, they take their other car. The petroleum-powered one. (Some 57 percent of American households have more than one vehicle.) So while it may seem inelegant that the Volt and its kin cram an engine and an electric motor in one vehicle, such a setup may make it less likely that you’ll feel a need for an extra car.

I once read the blog of an enthusiastic all-electric Leaf owner who documented the various recharging stops she made during a day of driving in and around her Seattle suburb. Her account was impressive, and she made her point that the Leaf’s range limitation need not invoke “range anxiety” (a term that GM tried to trademark in 2010, before the Volt was even on the market). But it was also a bit intimidating. Her planning was rigorous. She crafted her day’s driving around her car’s limitations. But what if there was an unexpected emergency or she simply forgot to plug in? Being lazy is an American consumer’s inalienable right, along with wanting to save money on fuel, and Bob Lutz knew that. Hence the plug-in hybrid.

As slick, considered compromises of technologies, plug-in hybrids are different by design. The Volt achieves its relatively lofty 38-mile EPA rating by carrying around a larger battery pack than its brethren, which cuts into interior space, limiting the seating to four. The EPA also considers it a compact car, while the Honda, Toyota, and Fords are considered midsize. GM calls the Volt a range-extended vehicle, since, unlike a true hybrid’s, its gas engine doesn’t power the wheels but instead turns a generator that provides electricity to the electric motor.

While it may seem inelegant that the Volt and its kin cram an engine and an electric motor in one vehicle, such a setup may make it less likely that you’ll feel a need for an extra car.

So how to decide? One of the best ways to compare operating costs across the spectrum of plug-in hybrids is the price calculator at fueleconomy.gov. To get a reliable result, though, you really need to go full-geek like the Seattle Leaf driver and analyze your driving patterns over a week or longer. This can be as simple as noting your odometer reading each night. Most people will realize how reliably consistent their driving is. The national average commute is about 30 miles.

My 41-mile round-trip commute, plus short-distance errand running, plus a desire to have only one car in my household, put the Volt in my sweet spot. But the 21-mile all-electric range of the two Fords, or the low-teens range of the Toyota and Honda plug-ins, may be spot-on for another driver. People who drive only long distances—perhaps their commutes are longer than the norm—may find that the price premium of a plug-in hybrid over a standard hybrid ($4,000 and up) doesn’t pencil out for them. After all, once a plug-in’s battery is depleted, you are basically driving what amounts to a high-priced hybrid.

On the other hand, don’t underestimate the pleasure of driving as many electric miles as possible. Electric cars are spunky, and their per-mile operating cost puts gasoline-powered cars to shame. The feeling of driving while using a bare minimum of gasoline is, in the words of the old MasterCard ads, priceless. And Detroit’s marketing executives know that.