Spirit Rock at 25: meditation and renovation

by Meredith May:  Fresh back from five years meditating in the Buddhist forest monasteries of Burma and Thailand, Jack Kornfield went to Manhattan to meet his sister-in-law. 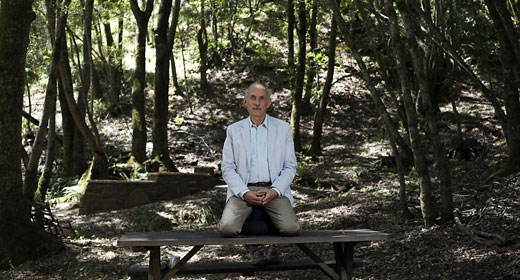 Still dressed in his ochre robes, with a shaved head, he took a seat to wait for her inside the Elizabeth Arden salon on Fifth Avenue. To pass the time, he closed his eyes and contemplated loving kindness.

Just then a claque of coiffed customers laughed and stared.

“Is he for real?” one of the women whispered.

The year was 1972, and there were no Buddhist meditation centers in the United States. In that moment, Kornfield knew he’d devote the rest of his life to rectifying the ancient Asian teachings of compassion, loving kindness and peace with the modern world.

“My time in the monastery had changed my life so beautifully that I had to share it,” Kornfield said.

In the four decades since those women made fun of him, Kornfield has become one of the foremost teachers of Theravada Buddhism in the West, author of 14 books and a leading force behind the founding 25 years ago of Spirit Rock meditation center in Marin County, where 40,000 people now come each year seeking spiritual enlightenment within a 2,500-year-old Asian religion.

“In the ’70s, we brought the greatest Buddhist teachers, such as Mahasi Sayadaw of Burma, to teach with us at Spirit Rock in the vernacular of the West – we never fussed over the holy Sanskrit part of it,” Kornfield, 67, said from his spartan writing cottage overlooking the center’s 412 acres of golden hills in San Geronimo Valley.

“Unlike so many Zen centers with charismatic leaders who stay, we never became a cultural outpost, so it never felt like you were stepping into another country when you came here. That way we stayed accessible to everyone.” 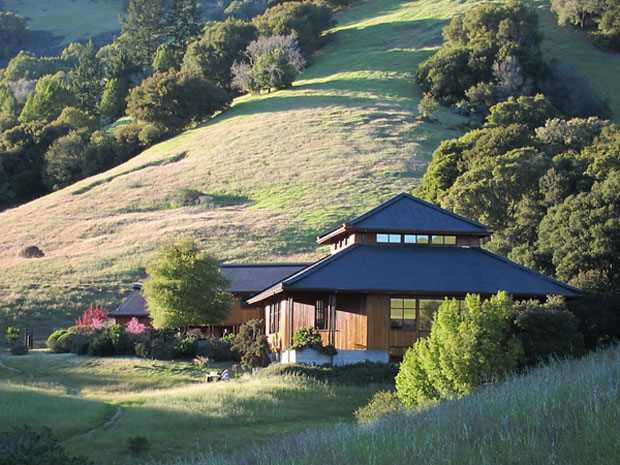 Spirit Rock’s meditation hall, in the hills of Woodacre, attracts 40,000 people each year.

The first people to show up for group meditations, retreats and classes were young Baby Boomers who were developing their careers in business, health and law, and were stressed and conflicted by living as overachievers.

“They wanted to practice quieting their minds,” he said.

It was an audience ready to try spiritual practice the Buddhist way: eliminating the basic roots of human suffering (greed, hatred, ignorance and delusion) and replacing them with the four radiant abodes (compassion, joy, loving kindness and peace). During weeklong and weekend retreats, classes and Monday night community meditations, visitors practiced letting go of ego, clinging and self-identification in a search for awakening.

It was a formula that would draw crowds for the next 25 years.

Now in its silver anniversary year, Spirit Rock has become a leading Buddhist meditation center, a stop on the Dalai Lama’s visits to the Bay Area, and a collaborator with Stanford, UC Berkeley and Silicon Valley in research and discussions about melding mindfulness with neuroscience, sociology and technology.

In that time, a collective 3.6 million hours of meditation has occurred in retreat at Spirit Rock. More than 2,600 volunteers have worked more than 7,000 programs attended by people who like tea: an estimated 747,000 cups of it. Instructors at Spirit Rock have included Vietnamese Zen Buddhist monk Thich Nhat Hanh, Ram Dass, religious scholar Huston Smith, and Maha Ghosananda, Cambodia’s Buddhist leader during the Khmer Rouge. 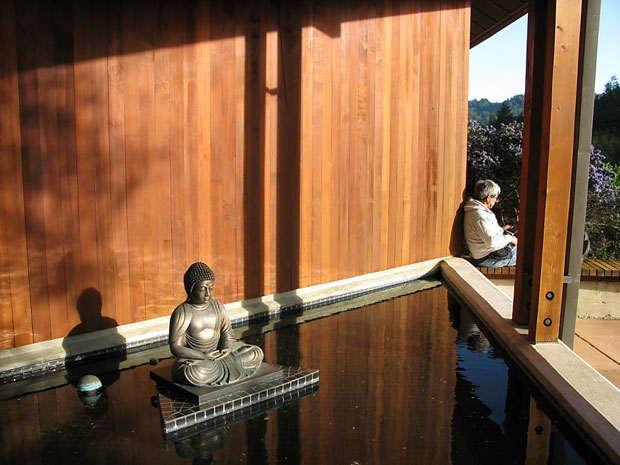 The reflecting pool at the Upper Meditation Hall at Spirit Rock

At this milestone moment, Spirit Rock has started a $30 million capital campaign to renovate the campus, which still includes some of the original trailers.

About $13 million has been raised so far, with a few generous donors and many more devotees giving a dollar a day in a Sangha of Thousands of Buddhas pledge.

Digging is expected to start in 2014 for the first phase of the project, which includes a 12,000-square-foot community meditation hall with a dharma resources library; an 11,000-square-foot village to replace aging trailers for teachers and staff; and a 5,000-square-foot welcome center and office, so staffers can relocate from a barn.

Kornfield is still in awe at how Spirit Rock was embraced from the start and grew steadily year after year. “I feel I have been carried along by this great adventure,” he said.

In the late 1960s, Kornfield graduated with a degree in Asian studies from Dartmouth College. He was 23 and facing the draft during the Vietnam War. So he joined the Peace Corps and asked to be sent to a Buddhist country. While working in rural hospitals in the Mekong River Valley along the border of Thailand and Laos, Kornfield began looking for a Buddhist teacher to help him learn how to work with his mind and overcome a painful family history. His father had a bad temper and had physically abused his mother.

“I have three brothers, and we all dealt with it differently,” said Kornfield, who is a twin. “One brother became angry, the others became depressed or hid behind humor and sarcasm. I became the peacemaker.”

After the Peace Corps, Kornfield went through the initiation to become a Buddhist monk at the ascetic forest monastery led by Ajahn Chah in Thailand, where the philosophy was to force aspirants to face what they dislike.

To contemplate his own death, Kornfield sat alone at night in charnel grounds in the forest, next to a burning body brought by villagers. He was instructed to meditate on the edge of a well to cure his constant sleepiness. Kornfield became precariously thin, on just the one meal a day allotted the monks, received by walking across the rice paddies each sunrise with a bowl to ask for alms from villagers, who donated what little they had, a fish or a mango.

Chah instructed Kornfield to cover himself with warm blankets on a hot day to intensify and embrace his anger.

“Once I learned how to be mindful of my strong emotions, I could go deeper than the anger and see my fear,” he said. “That gave me compassion for my own self-judgment. I was learning the inner architecture of who I am.”

The realization prompted Kornfield to write a book when he returned to the United States. At a cocktail party in Cambridge, Mass., he met the late Tibetan Lama and dharma teacher Chögyam Trungpa Rinpoche and showed him the manuscript.

Trungpa quickly hired Kornfield to teach Theravada Buddhism at a new Buddhist school he was starting in 1974 in Boston called Naropa University.

At Naropa, Kornfield befriended colleagues Joseph Goldstein and Sharon Salzberg, and the three established their own Insight Meditation Society in Barre, Mass., in 1976.

Within a decade, a group from Insight Meditation Society – including James Baraz, Sylvia Boorstein, Anna Douglas, Howie Cohn and Kornfield – began looking for property to start a new center on the West Coast, with a stronger focus on incorporating the dharma into daily life.

In 1988, the group bought almost 1 square mile of land in a secluded valley rumored to be an American Indian sacred site in Woodacre for $900,000. The seller was the Nature Conservancy, which used the proceeds to save thousands of acres of rain forest in the Amazon.

Today, Kornfield, who splits his time between his Spirit Rock cottage and his home in Fairfax, is busier than ever: working on his next book about inner freedom; appearing at Wisdom 2.0 conferences in Silicon Valley to talk about technology and mindfulness with the founders of Zynga and Twitter; raising money for health clinics in Burma; and working on a loving-kindness curriculum for returning U.S. veterans.

He’s working closely with Spirit Rock’s new director, Michelle Latvala, to cultivate the next generation of leaders for Spirit Rock.

Together they are testing out online live streaming of Spirit Rock classes and looking for ways to reach a wider audience.

“I feel tremendously blessed to be part of Spirit Rock,” Kornfield said. “My job is to watch people go through the Vipassana face-lift. They come here stressed and tired, they learn to quiet their mind and open their heart, and they look radiant when they leave. They actually look different.”

This story has been corrected since it appeared in print editions.