by Dean Radin, PhD:  Physicists and cosmologists today soberly discuss the possibility of multiple dimensions beyond space and time, infinite parallel worlds, and most of the universe made out of invisible stuff (96% “dark” matter and energy). 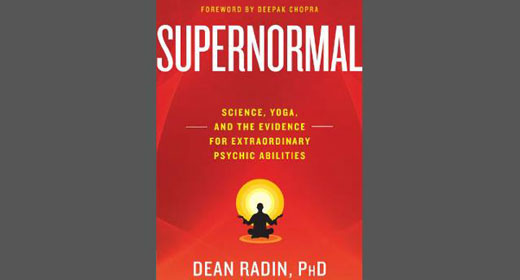 In earlier times, we were enthralled with equally weird stories by shaman high on psychedelic plants or by mystics high on life. But unlike the abstract models pondered by today’s physicists, the mystics were reporting first-hand travelogues about worlds and spirits made up out of mostly invisible stuff. Some of their stories pushed hard on our boggle thresholds, but others were so strangely compelling that they formed the core of our enduring religious beliefs.

How shall we interpret stories about strangely invisible domains beyond the mundane world? When it comes to physics and cosmology, we rely on scientific experiments published in peer-reviewed professional journals to suggest what is repeatable and probably true. When it comes to the mystics, scholars have carefully compared claims of “other reality” experiences reported throughout history and across cultures. In doing so they’ve noticed some striking similarities. What the mystics were describing appears to be a basic human experience independent of language and culture. This suggests that beyond local customs something quite real is happening. Perhaps the most famous synthesis of these stories, called “perennialism” by scholars, was expressed by Aldus Huxley in his 1944 book The Perennial Philosophy. Huxley described this as
… the metaphysic that recognizes a divine Reality substantial to the world of things and lives and minds; the psychology that finds in the soul something similar to, or even identical with, divine Reality; the ethic that places man’s final end in the knowledge of the immanent and transcendent Ground of all being.”

The existence of a perennial philosophy raises a question: How can any group of people across the millennia agree about “other” realities coexisting with everyday reality when the members of that group represent radically different cultures, had vastly different degrees of education, and where some held strong religious beliefs and others held none? The rest of us non-mystics can’t even agree on what kind of pizza topping to order, never mind something as complex as the essential nature of reality. Psychiatrist Rick Strassman, who has investigated experiences during psychedelic experiences, was similarly struck by the strong subjective agreement about non-ordinary realities. As he put it, “Foolish, arbitrary thinking can hardly reach this degree of consensus.”

It is worth mentioning that not all scholars of mysticism are fans of perennialism. Others prefer the idea of “constructivism,” which focuses on the differences among esoteric traditions and experiences. Still others accept that because mysticism is grounded in human experience, and humans haven’t changed much in the last 10,000 years or so, that some form of perennialism is probably valid but culture also shapes our interpretation of those experiences.

Beyond the fine points debated by scholars, many mystical traditions describe a host of time-honored techniques for developing a direct realization of the perennial reality. Perhaps the oldest is shamanism, an ancient animistic belief that everything is alive and that certain people are able to personally interact with living spirits. Evidence of shamanism can be found in the hoary mists of Stone Age prehistory and in every indigenous culture around the world.

A shaman was a doctor, priest, philosopher, scientist, oracle, and keeper of wisdom, all embodied in the same person. The shaman’s profession required him, or her, to reliably enter visionary states and to bring back pragmatically useful information. The shaman wasn’t escaping into altered states of consciousness just for fun – the very life of the tribe depended on his or her effectiveness in finding food and avoiding danger and illness. The use of psychedelic drugs was brought to a high art for this purpose, possibly including the Amanita muscaria mushroom that may have been the basis of the consciousness transformation beverage called soma by early Brahmin priests. (Some scholars today believe that soma may have been a catalyst for the ancient revealed Hindu texts, the Vedas, and ultimately for the development of yoga as a transformative practice.)
Despite its ancient roots, shamanism remains vibrantly alive today at the leading edges of the contemporary world. It is possible to purchase shamanic drumming apps for smartphones, and Google finds millions of web sites containing the word “shamanism.” Some segments of humanity have clearly retained the strong, inherent attraction for knowing beyond the known.

Methods developed by shamans for reliably exploring those far countries included dancing, chanting, drumming, fasting, controlled breathing, and ingesting psychedelic compounds. One of the most effective techniques was concentrating attention on the mind itself, or meditation. The rising popularity of meditation today suggests that a growing percentage of the population is now experiencing realities once reported only by shaman and mystics. The last time millions of people were exposed to powerful transformational tools was the “psychedelic 60s,” when LSD and other hallucinogenic compounds were adopted by popular counterculture. The consequences of a sizable proportion of Western youth suddenly seeing reality in new ways was a stupendous increase in societal creativity, and we only need to think of societal and technological changes over the last 50 years to see its lasting effects. What wonders might we see 50 years from now, as another creative impulse borne out of meditation begins to emerge?