William James and the Theory of Emotion 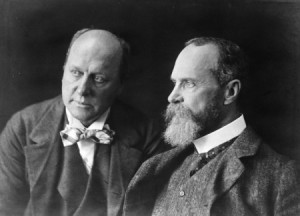 Consider this scenario: a 6-year-old kid named Ben invites a friend, Zack, over to play. They go up to Ben’s room, where Ben has a big train set, and Zack grabs Ben’s favorite train and looks at it, causing Ben to suddenly burst out in tears. His Mom comes rushing in, takes the train from Zack, and comforts Ben until he calms down.

Ben’s reaction is so extreme that it worries his mother, and from that time on, whenever a new friend comes to visit she makes a point of whispering to them first, “Be careful not to touch his toys. It gets him upset.” This seems to head off any future disasters, and the incident is gradually forgotten.

Simple story, simple resolution — right? But now let’s bring in a favorite philosopher, the distinguished William James, to analyze the situation. James, a highly original and important American thinker who happened to be the older brother of novelist Henry James, had a peculiar theory of emotion. According to James, we don’t smile because we feel happy or cry because we feel sad. The physical reaction happens first, the philosopher said, and it’s more correct to say we feel happy because we smile, or we feel sad because we cry.

This seems like a strange formulation, and I considered it highly dubious when I first heard it many years ago. It took a long time before I started realizing that James is right. If you closely observe your own emotional reactions during an average day, you may find evidence to support this. When affected by an outside stimulus, you are not likely to evaluate the stimulus coolly and rationally and then formulate a physical reaction. Rather, you are an audience to your emotional/physical reactions. You watch them happen. And that, William James said, is how we discover how we’re feeling.

Of course, this begs the question of what exactly “we” are to begin with, but that’s a different tangent. James covers that too.

Let’s relate this to Ben and Zack, and analyze exactly what happened in the bedroom when Zack touched his train. Ben’s initial reaction was one of surprise. He’d never had a friend come up to his bedroom before, and it simply never occurred to him that any other kid would touch his beloved train set. The first physical reaction was a loud gasp when he saw Zack reach out and grab his train.

This was followed by a second reaction, a sudden flush of embarrassment, because Ben realized that Zack had heard him gasp, and he didn’t have any way to explain why he had gasped (he had never experienced anything like this before). The potent combination of surprise and embarrassment adds up to a complete crying breakdown.

The irony is that Ben truly didn’t mind that Zack touched his train set. He was flattered that another kid would admire his trains. He never experienced a pang of sadness or protectiveness towards his train set — he simply cried after a blast of surprise and embarrassment. Once his mother started whispering to his friends and relatives that Ben didn’t like his stuff touched, this became a self-fulfilling fact, which is sad because Ben is naturally the very model of generosity.

If we could begin, if we could even begin to comprehend the undercurrents of emotion that propel and control us, we would be able to make better decisions, and solve problems more easily as well. William James’ theory of emotion is only one of the pillars of this remarkable man’s thought; and I’d like to try to explore some of his other philosophies in future articles here. Why? I don’t know — it makes me smile, which is how I know I like it.