by Maria Popova: References philosopher William James writings on Habit from 1887. “We are spinning our own fates, good or evil, and never to be undone. Every smallest stroke of virtue or of vice leaves its never so little scar.” 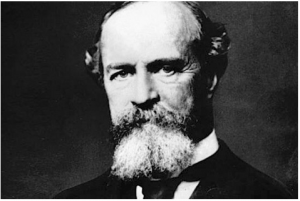 “We are what we repeatedly do,” Aristotle famously proclaimed. “Excellence, then, is not an act, but a habit.” Perhaps most fascinating in Michael Lewis’s altogether fantastic recent Vanity Fair profile of Barack Obama is, indeed, the President’s relationship with habit — particularly his optimization of everyday behaviors to such a degree that they require as little cognitive load as possible, allowing him to better focus on the important decisions, the stuff of excellence.

I found this interesting not merely out of solipsism, as it somehow validated my having had the same breakfast day in and day out for nearly a decade (steel-cut oats, fat-free Greek yogurt, whey protein powder, seasonal fruit), but also because it isn’t a novel idea at all. In fact, the same tenets Obama applies to the architecture of his daily life are those pioneering psychologist and philosopher William James wrote about in 1887, when he penned Habit (public library; public domain) — a short treatise on how our behavioral patterns shape who we are and what we often refer to as character and personality.

When we look at living creatures from an outward point of view, one of the first things that strike us is that they are bundles of habits. In wild animals, the usual round of daily behavior seems a necessity implanted at birth in animals domesticated, and especially in man, it seems, to a great extent, to be the result of education. The habits to which there is an innate tendency are called instincts; some of those due to education would by most persons be called acts of reason. It thus appears that habit covers a very large part of life, and that one engaged in studying the objective manifestations of mind is bound at the very outset to define clearly just what its limits are.

James begins with a strictly scientific, physiological account of the brain and our coteries of ingrained information patterns, exploring the notion of neuroplasticity a century before it became a buzzword of modern popular neuroscience and offering this elegant definition:

Plasticity … in the wide sense of the word, means the possession of a structure weak enough to yield to an influence, but strong enough not to yield all at once.

He then bridges the body and the mind to shed light on how “habit loops” dominate our lives:

What is so clearly true of the nervous apparatus of animal life can scarcely be otherwise than true of that which ministers to the automatic activity of the mind … Any sequence of mental action which has been frequently repeated tends to perpetuate itself; so that we find ourselves automatically prompted to think, feel, or do what we have been before accustomed to think, feel, or do, under like circumstances, without any consciously formed purpose, or anticipation of results.

He eventually brings this lens to social science, painting a somewhat ominous picture of habit as a kind of trance:

Habit is thus the enormous fly-wheel of society, its most precious conservative agent. It alone is what keeps us all within the bounds of ordinance, and saves the children of fortune from the envious uprisings of the poor. It alone prevents the hardest and most repulsive walks of life from being deserted by those brought up to tread therein. It keeps the fisherman and the deck-hand at sea through the winter; it holds the miner in his darkness, and nails the countryman to his log cabin and his lonely farm through all the months of snow; it protects us from invasion by the natives of the desert and the frozen zone. It dooms us all to fight out the battle of life upon the lines of our nurture or our early choice, and to make the best of a pursuit that disagrees, because there is no other for which we are fitted, and it is too late to begin again. It keeps different social strata from mixing. Already at the age of twenty-five you see the professional mannerism settling down on the young commercial traveller, on the young doctor, on the young minister, on the young counsellor-at-law. You see the little lines of cleavage running through the character, the tricks of thought, the prejudices, the ways of the ‘shop,’ in a word, from which the man can by-and-by no more escape than his coat-sleeve can suddenly fall into a new set of folds. On the whole, it is best he should not escape. It is well for the world that in most of us, by the age of thirty, the character has set like plaster, and will never soften again.

This brings us to the question of education, whose responsibility it is to chaperone the formation of habit and curtail the very daily deliberations of which Obama has gladly rid himself:

The great thing, then, in all education, is to make our nervous system our ally instead of our enemy. It is to fund and capitalize our acquisitions, and live at ease upon the interest of the fund. For this we must make automatic and habitual, as early as possible, as many useful actions as we can, and guard against the growing into ways that are likely to be disadvantageous to us, as we should guard against the plague. The more of the details of our daily life we can hand over to the effortless custody of automatism, the more our higher powers of mind will be set free for their own proper work. There is no more miserable human being than one in whom nothing is habitual but indecision, and for whom the lighting of every cigar, the drinking of every cup, the time of rising and going to bed every day, and the beginning of every bit of work, are subjects of express volitional deliberation.

He proceeds to offer three maxims for the successful formation of new habits:

The acquisition of a new habit, or the leaving off of an old one, we must take care to launch ourselves with as strong and decided an initiative as possible. Accumulate all the possible circumstances which shall reenforce the right motives; put yourself assiduously in conditions that encourage the new way; make engagements incompatible with the old; take a public pledge, if the case allows; in short, envelop your resolution with every aid you know. This will give your new beginning such a momentum that the temptation to break down will not occur as soon as it otherwise might; and every day during which a breakdown is postponed adds to the chances of its not occurring at all.

Never suffer an exception to occur till the new habit is securely rooted in your life. Each lapse is like the letting fall of a ball of string which one is carefully winding up; a single slip undoes more than a great many turns will wind again. Continuity of training is the great means of making the nervous system act infallibly right … It is surprising how soon a desire will die of inanition if it be never fed.

Seize the Very first possible opportunity to act on every resolution you make, and on every emotional prompting you may experience in the direction of the habits you
aspire to gain. It is not in the moment of their forming, but in the moment of their producing motor effects, that resolves and aspirations communicate the new ‘set’ to
the brain. Of course, as is often the case with famous advice, James immediately follows up with a disclaimer that echoes Joan Didion’s eloquent definition of character:

No matter how full a reservoir of maxims one may possess, and no matter how good one’s sentiments may be, if one have not taken advantage of every concrete opportunity to act, one’s character may remain entirely unaffected for the better. With mere good intentions, hell is proverbially paved. And this is an obvious consequence of the principles we have laid down. A ‘character,’ as J. S. Mill says, ‘is a completely fashioned will’; and a will, in the sense in which he means it, is an aggregate of tendencies to act in a firm and prompt and definite way upon all the principal emergencies of life. A tendency to act only becomes effectively ingrained in us in proportion to the uninterrupted frequency with which the actions actually occur, and the brain ‘grows’ to their use.

He makes a case, once again, for the consistency of effort, offering one final maxim:

Just as, if we let our emotions evaporate, they get into a way of evaporating; so there is reason to suppose that if we often flinch from making an effort, before we know it the effort-making capacity will be gone; and that, if we suffer the wandering of our attention, presently it will wander all the time. Attention and effort are … but two names for the same psychic fact.

Keep the faculty of effort alive in you by a little gratuitous exercise every day. That is, be systematically ascetic or heroic in little unnecessary points, do every day or two something for no other reason than that you would rather not do it, so that when the hour of dire need draws nigh, it may find you not unnerved and untrained to stand the test. Asceticism of this sort is like the insurance which a man pays on his house and goods. The tax does him no good at the time, and possibly may never bring him a return. But if the fire does come, his having paid it will be his salvation from ruin.

He cautions about the gravity of our habitual choices, however small they may seem:

The physiological study of mental conditions is thus the most powerful ally of hortatory ethics. The hell to be endured hereafter, of which theology tells, is no worse than the hell we make for ourselves in this world by habitually fashioning our characters in the wrong way. Could the young but realize how soon they will become mere walking bundles of habits, they would give more heed to their conduct while in the plastic state.

We are spinning our own fates, good or evil, and never to be undone. Every smallest stroke of virtue or of vice leaves its never so little scar. … Nothing we ever do is, in strict scientific literalness, wiped out.

James concludes with a timeless validation of grit as the secret to success:

Let no youth have any anxiety about the upshot of his education, whatever the line of it may be. If he keep faithfully busy each hour of the working-day, he may safely leave the final result to itself. He can with perfect certainty count on waking up some fine morning, to find himself one of the competent ones of his generation, in whatever pursuit he may have singled out. Silently, between all the details of his business, the power of judging in all that class of matter will have built itself up within him as a possession that will never pass away. Young people should know this truth in advance. The ignorance of it has probably engendered more discouragement and faint-heartedness in youths embarking on arduous careers than all other causes put together.