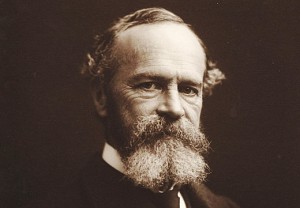 Example of Teaching
“The greatest discovery of my generation is that a human being can alter his life by altering his attitudes.”

The Varieties Of Religious Experience: A Study In Human Nature

The Principles of Psychology, Vol. 1

William James (January 11, 1842 – August 26, 1910) was an American philosopher and psychologist who had trained as a physician. He was the first educator to offer a psychology course in the United States and he was instrumental in establishing Harvard’s psychology department, which at its inception was tied to the department of philosophy.

William James was born in New York City and was the son of Henry James Sr., a noted and independently wealthy Swedenborgian theologian well acquainted with the literary and intellectual elites of his day. Initially trained in painting, James abandoned the arts and enrolled in Harvard in 1861 to study chemistry and anatomy. During an extended stay in Germany, after graduating, James developed an interest in studying the mind as well as the body.

William conducted laboratory research on sensation and perception and he developed his belief in the connection between mind and body into what is known as the James-Lange Theory of emotion. The theory states that human experience of emotion arises from physiological changes in response to external events. Inspired by evolutionary theory, James’s theoretical perspective on psychology came to be known as functionalism, which sought causal relationships between internal states and external behaviors.

In 1890 James published a highly influential, two-volume synthesis and summary of psychology, Principles of Psychology. The books were widely read in North America and Europe, gaining attention and praise from Sigmund Freud and Carl Jung in Vienna. James then moved away from experimental psychology to produce more philosophical works (he is credited as one of the founders of the school of American Pragmatism), although he continued to teach psychology until he retired from Harvard in 1907.

An Interview with William James

The Essence of Humanism

The Stream of Consciousness

The Gospel of Relaxation

William James His Life and Philosophy

William James: The Psychology of Possibility

William James and the Sick Soul

William James on Religion and Philosophy