A Way Out of Suffering: An Interview With Sharon Salzberg

Omega Institute:  talks with Sharon Salzberg, who urges us to live from love and take care of one another. 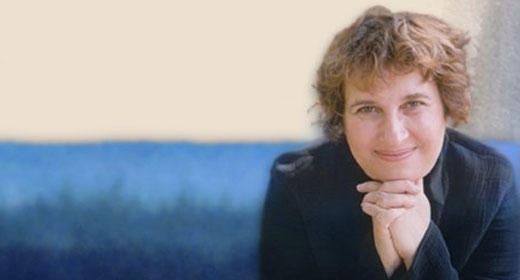 Sharon: I call myself a meditation teacher rather than a spiritual teacher. But I understand why people use that word. I imagine they’re trying to capture the idea of practicing or working with someone to look underneath our immediate circumstance to find meaning or happiness without identifying with a particular religious path.

Omega: If you taught something like knitting, you might know your student is doing well because they’re making a beautiful sweater. How do you measure if your students are progressing along the spiritual path?

Sharon: It wouldn’t be because of something that happened in their meditation practice. It would be because they’re having a different experience of life. I had a student who had been doing lovingkindness meditation for about three years. He said, “I have to confess that my experience now, three years later, is not all that different than it was when I began, but I’m like a different person. I’m different with myself, my family, and my community. Is that enough?” I said, “Yeah, I think that’s enough.” That’s how it works with a practice like meditation. Life continues, and we gradually notice we’re having a different experience of it.

Omega: Like teaching scales to a piano student, you don’t want them to get perfect at scales, you want to give them something they can use to be a great artist. So, in a way, you’re teaching people the art of being human or how to live meaningfully.

Sharon: Yes, that’s a great way of expressing it.

Omega: We’ve heard you say you were attracted to meditation because a teacher in college suggested it teaches a way out of suffering. Why, at such a young age, were you interested in that?

Sharon: I had a very turbulent and painful childhood, like many people. I left for college when I was 16 years old and up until that point I’d lived in five different family configurations. Each one ended or changed through a death or some terrible loss. My father left when I was four. My mother died when I was nine. I lived with my father’s parents whom I hardly knew and then my grandfather died. My father came back when I was 11 years old, but he was mentally ill and entered the mental health system.

When I went to college, I took an Asian philosophy course, which turned out to be mostly about Buddhism. The first of the four noble truths of Buddhism, that there is suffering in life, was enormously important to me. No one had ever said it out loud. That had been my experience, of course, but no one had ever talked about it. I didn’t know what to do with all the fear and emotions within, and here was the Buddha saying this truth right out loud. I wasn’t alone, I wasn’t weird, and I didn’t have to feel isolated.

Omega: It’s one of life’s big mysteries that we don’t talk to each other about the most common things, like the fact that we wake up in the morning feeling confused and scared and full of self-doubt. The miracle is when someone finally names it — that’s so liberating.

Sharon: It was an enormous relief for me. For the first time I didn’t feel so utterly alone, like I had a shameful secret. Then I learned the next three noble truths — I could do something about the suffering. I couldn’t change the circumstances, or make the loss or hurt go away, but I could change how I dealt with it. I could approach my pain with compassion instead of bitterness, in community rather than isolation. I realized the same was true of changing my relationship to pleasure. I could be so distracted, I wouldn’t notice when something good did happen. And with neutral things, like my daily routine, I was barely aware of being there. The Buddha offered a very simple, pragmatic tool — meditation — to transform one’s relationship to everything.

Omega: Where did you learn how to meditate? Did they teach that in college?

Sharon: I attended a university with an independent study program. I wrote out a proposal to study in India for a year and they accepted it.

Omega: Wow, that’s a miraculous story! It’s like a myth.

Sharon: Yes, looking back on it, it seems fantastic, but at the time, it was just my life. Now, I look at 18-year-olds and realize how young I was.

Omega: The Buddha named the suffering and laid out meditation as a way to end suffering. How does the act of sitting in silence, which seems so simple, address suffering, which is so complex?

Sharon: Meditation can be thought of as sitting quietly and being with what is. It’s also a process where we train our attention. Both ways of viewing meditation help us be with whatever experience we are having. Concentration helps us steady our attention, which is important, because if we aren’t centered, we’ll get sucked into whatever painful experience comes along, and we won’t be able to see clearly. Mindfulness helps us refine our attention so we can be with the present moment rather than projecting out into the future or the past, or judging ourselves. Lovingkindness helps us open our attention so we can stop being cruel to ourselves and others in the face of suffering and instead be more graceful and caring. They are all trainings in attention.

Omega: Do you think psychotherapy has a place on the spiritual path?

Sharon: It can certainly have a place. Even on the spiritual path, we have things we’ll tend to cover up or be in denial about. In the past, training in meditation would be done with a teacher, often in a very close relationship. They would sometimes help and support you by challenging you or provoking you to see something you weren’t seeing. Since most of us don’t practice in that way today, a psychologist can help play that role.

People often ask me, “How can I replicate what you had in India?” And I say, “It’s not easy.” Practice is different in this culture and in this time. And, although it’s not necessarily for everyone, sometimes someone like a therapist can help.

Omega: One of the biggest complaints we hear from people is that “I don’t have time to meditate.” How do you address that?

Sharon: If someone said to you, “Here’s something you can do to end the suffering of someone you love, a friend or family member, and it will only take 20 minutes each day,” we’d do it. But when we think of doing it for ourselves, we think it’s selfish, or we have too much to do. The irony is, doing it for ourselves is doing something for those we love. The choice requires a level of self-care and the willingness to commit.

Omega: Perhaps if people understood that this isn’t just about me, it’s about me and my relationship to everything, they would feel encouraged to do it. People can start with one minute each morning for a week and see what happens. Then they can add another minute the following week. By the end of the year they’ll have a 20-minute practice.

Sharon: That’s great. It has to be realistic for a person, and the thing that’s more important than the amount of time is the regularity of it. Practicing every day is what changes things over time.

Omega: People come to the spiritual path for many reasons, but one we hear a lot is to deal with uneasiness or questions around death. Is there a soul? What is it? What happens to the body? Has your study given you any answers to these big questions?

Sharon: I have views and opinions, but I hate to call them answers. I tell a story in my book Faith about an argument I once had with a Tibetan Buddhist. In that tradition they believe we are not reborn for up to 49 days. In my tradition (Theravadan), we say we’re reborn immediately. I argued with this person about this at some length. Afterward, I realized that we are two people who are afraid to die and we’re trying to use our belief systems as a way to negate that fear. We can’t know for sure what happens, and so we refuse to acknowledge we are afraid, so we argue. I am less afraid now than I used to be, probably because of meditation. In meditation, we continually step into the unknown and acknowledge that we can be okay even if we don’t know. Living like that is a kind of training for dying. I still have some ideas about what happens, but I don’t want to force that on anyone.

Omega: What’s one of those views?

Sharon: Intuitively, I feel that rebirth is very likely. I have the sense that letting go of this body isn’t necessarily the end of the show, that there is some kind of continuity. But how that happens is a mystery.

Omega: That’s lovely. We are very good at clobbering others with ideas, but the irony is that where we all find common ground is in the idea of love. Every religion has their version of the Golden Rule — do unto others as you would have them do unto you — yet we are failing miserably in living it. Why do you think it’s so hard for us to actualize this?

Sharon: I find it remarkably touching and hopeful that love can be seen as the basis of religion and faith. In our day-to-day life, though, we get mixed messages. We want to be kind to our neighbor yet are told it’s a dog-eat-dog world. We want to turn the other cheek, but think we also must get revenge and defend our honor. We want to feel included and inclusive, but we must get ahead at all costs. We want to love, but we’re afraid to be hurt. Today, even the secular world of science is pointing us toward the truth of love and interconnectedness. Whether we’re looking at the environment, economics, or epidemiology, it keeps telling us we’re not alone and we’re not disconnected. We have to take care of one another or we’re going to go down together. I think learning to live from love is the greatest opportunity that exists right now.

Sharon Salzberg will be teaching a workshop, Fierce Compassion, Sept. 14-16, 2012 at Omega Institute in Rhinebeck, N.Y.