by Bill McKibben:  For almost all of human history, 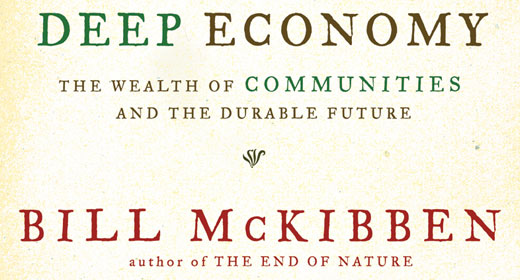 said the great economist John Maynard Keynes, from “say, two thousand years before Christ down to the beginning of the eighteenth century, there was really no great change in the standard of living of the average man in the civilized centers of the earth. Ups and downs, certainly visitations of plague, famine and war, golden intervals, but no progressive violent change.” At the utmost, Keynes calculated, the standard of living had increased one hundred percent over those four thousand years. The reason was, basically, that we didn’t learn how to do anything new.

And then, in 1712, something new finally happened. A British inventor named Thomas Newcomen developed the first practical steam engine. He burned coal, and used the steam pressure built up in his boiler to drive a pump that, in turn, drained water from coal mines, allowing them to operate far more cheaply and efficiently. How much more efficiently? His engine replaced a team of five hundred horses walking in a circle. And from there – well, things accelerated. Suddenly, one hundred percent growth in the standard of living could be accomplished in a few decades, not a few millennia.

In some ways, the invention of the idea of economic growth was almost as significant as the invention of fossil fuel power. It also took a little longer. It’s true that by 1776 Adam Smith was noting in The Wealth of Nations that “it is not the actual greatness of national wealth, but its continued increase” which raises wages.

But, as the economist Benjamin Friedman points out in The Moral Consequences of Economic Growth, his recent and compelling argument for economic expansion, it’s “unclear whether the thinkers of the mid-18th century even understood the concept of economic growth in the modern sense of sustained increase over time,” or whether they thought the transition to modern commerce was a one-time event – that they’d soon hit a new plateau. The theorists didn’t control affairs, though; and the dynamic entrepreneurial actors unleashed by the new economic revolution soon showed that businesses could keep improving their operations, apparently indefinitely.

Policy makers and economists didn’t really become fixated on growing the total size of the economy until after World War II. Mobilization for war proved just how fast the economy could grow; by 1942, even in the midst of battle, the national Resources Planning Board sent this report to Roosevelt: “Our expanding economy is likely to surpass the wildest estimates of a few years back and is capable of bringing to all of our people freedom, security and adventure in richer measure than ever before in history.” From that point on, growth became America’s mantra, and then the world’s.

From that point on, growth became America’s mantra, and then the world’s.

Per capita gross national product grew twenty-four percent between 1947 and 1960, and during that year’s presidential election, John F. Kennedy insisted he could speed it up if the voters would only reject “those who have held back the growth of the U.S.” Indeed, he proved correct: between 1961 and 1965, GNP grew more than five percent a year while the percentage of Americans living in poverty dropped by nearly half. Economists scrambled to catch up, and in doing so they built the base for modern growth theory.

There were hiccups along the way. The oil shocks of the 1970’s and the spectacles of burning rivers and smoggy cities led some, even outside what was then called the counterculture, to question the idea of endless expansion. But in 1980, Ronald Reagan’s election convinced us it was “Morning in America” again, and under various banners – supply-side economics, globalization – it has stayed morning ever since. The collapse of communism drove the point home, and now mainstream liberals and conservatives compete mainly on the question of what can flog the economy faster.

The evangelism for efficiency and growth grew louder, too. It was not just, as Benjamin Friedman insists, that a growing economy gets us more stuff –“better food, bigger houses, more travel” – but that it makes us better people: more open, more tolerant, more confident. The “quality of our democracy – more fundamentally, the moral character of American society – is at risk,” he said, unless we grow the economy more vigorously. As the new millennium began, growth had become the organizing ideology for corporations and individuals, for American capitalists and Chinese communists, for Democrats and Republicans.

And it was easy to understand why. For one thing, under present arrangements any faltering of growth leads quickly to misery: to recession and all of its hardships. For another, endless growth allows us to avoid hard choices, to reconcile, in economist Robert Collins’ words, the American “love of liberty with its egalitarian pretensions.” The administration of George W. Bush assured us that we could have tax cuts and still protect Social Security because the tax cuts will stimulate economic growth so much that we’ll have more than enough cash on hand to take care of our old. No need to choose. Having found what has been truly a magic wand, the strong temptation is to keep waving it.

What’s odd is, none of this stuff appears to have made us happier. All that material progress – and all the billions of barrels of oil and millions of acres of trees that it took to create it – seem not to have moved the satisfaction meter an inch.

But, as readers of fairy tales know, magic can run out. Three fundamental challenges to the fixation on growth have emerged. One is political: growth, as least as we now create it, is creating more inequality than prosperity, more insecurity than progress. By contrast, the second argument draws on physics and chemistry as much as on economics; it is the basic objection that we do not have the energy needed to keep the magic going, and can we deal with the pollution it creates? The third argument is both less obvious and even more basic: growth is no longer making us happy. These three objections mesh with each other in important ways; taken together, they suggest that we’ll no longer be able to act wisely, either in our individual lives or in public life, simply by asking which choice will produce more.

On the list of important mistakes we’ve made as a species, this one seems pretty high up: A singleminded focus on increasing wealth has driven the planet’s ecological systems to the brink of failure, without making us happier. How did we screw up?

The answer’s pretty obvious. Since happiness had increased with income in the past, we assumed it would do so in the future. This case was easy to understand, because human beings have spent so much of their history trying to satisfy basic needs. Consider, say, an American in 1820, two generations after Adam Smith. The average American earned, in current dollars, less that $1,500, which is somewhere near the current African average. Even in 1900, the average American lived in a house the size of today’s typical garage. Is it any wonder, then, that we built up a considerable velocity trying to escape the gravitational pull of that kind of poverty?

Today, all of us in the West are living lives materially more abundant than most people did a generation ago. As the conservative writer Dinesh D’Souza noted recently, we have created not just the first middle class, but “the first mass affluent class in world history.” What’s odd is, none of this stuff appears to have made us happier. All that material progress – and all the billions of barrels of oil and millions of acres of trees that it took to create it – seem not to have moved the satisfaction meter an inch. In 1946, the United States was the happiest country among four advanced economies; thirty years later, it was eighth among eleven advanced countries; a decade after that it ranked tenth among twenty-three nations, many of them from the third world.

The phenomenon isn’t confined to the United States; as other nations have followed us into mass affluence, their experiences have begun to yield similar, though less dramatic, results. In the United Kingdom, for instance, per capita gross domestic product grew sixtysix percent between 1973 and 2001, yet people’s satisfaction with their lives changed not at all. Japan saw a five-fold increase in per capita income between 1958 and 1986 without any reported increase in satisfaction.

The ecological upheaval promised by global warming is more disruptive than any military threat humans have yet faced.

In the immortal words of Mr. Jagger and Mr. Richards, “I can’t get no satisfaction.” Bling won’t do it anymore. But we can’t figure out where else to look. We’ve run out of ideas. When Americans in one survey were asked what single factor would most improve the quality of their lives, the most frequent answer was more money. This isn’t the fault of economists: economists built us a wonderful set of tools for getting MORE. It’s easy to understand why they, and the political leaders they advise, would be pleased to try and keep using these tools – pleased to keep us becoming ever more efficient, achieving ever greater economies of scale. But there’s something profoundly unrealistic and sentimental about that approach, given what we’ve discovered about the limits on growth’s ability to produce human happiness.

We need, in short, a new utilitarianism. We in the rich countries no longer inhabit a planet where straightahead Newtonian economics, useful as it has been, can help us. We need an Einsteinian economics, a more complicated and relativistic science that asks deeper questions.

In the twenty-first century, no one wants to do away with markets, or to centrally plan economies; outside of China, most people are committed to some form of democracy. But the choices are no less crucial, and the stakes may be even higher. The ecological upheaval promised by global warming is more disruptive than any military threat humans have yet faced. The diminished availability of fossil fuel is not the only limit we face. In fact, it’s not even the most important. Before we run out of oil, we’re running out of planet.

Meeting somewhere in the middle may be our only hope. The poor nations of the world need to develop. But if they develop according to our model, the planet will break under the strain. We in the rich nations need to change, not just for environmental reasons but because our way has stopped producing as much happiness as it should. We’ve gone too far down the road we’re traveling. The time has come to search the map for better possibilities, to strike out in new directions.

Instead of economic growth, what goals should our politicians focus on? – Tell us below!