How To Do The Perfect Push-Up 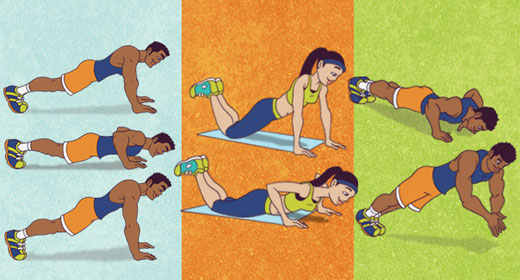 but sometimes they just don’t look so pretty. Fear not! We’ve got the guide to get it right. Push-ups are a total-body functional move that are great for increasing strength, much like bench-pressing, and have the added benefit of engaging the core and lower body (thanks, gravity!). The bodyweight exercise can be done just about anywhere — with a ton of variations to liven things up. So let’s drop down and do the perfect push-up. 1. Get into a plank position with hands planted directly under the shoulders (slightly wider than shoulder width apart). Ground the toes into the floor to stabilize the bottom half of the body. Engage the abs and back so the body is neutral. In other words, flat as a… plank (ah, now we get it!).

2. Begin to lower the body — back flat, eyes focused about three feet in front of you to keep a neutral neck— until the chest nearly touches the floor. (Note: Some experts say a push-up isn’t a push-up unless the chest actually grazes the ground). Don’t let the butt dip or stick out at any point during the move; the body should remain flat from head to toe all the way through the movement. Draw the shoulder blades back and down, while keeping the elbows tucked close to the body, so the upper arms form a 45-degree angle at the bottom of the push-up position.

3. Keeping the core engaged, exhale as you push back to the start position as explosively as possible without leaving the ground (pow!). That’s one! Repeat for 10-20 reps or as many as can be performed with good form (no sagging those hips, ya heard?).

Changing the positions of both the elbows and hands will activate different muscles and amp up the intensity of the basic push-up. Ready? Here we go! Bent Knee Push-Up
These push-ups are great for beginners to nail down form before graduating to other varieties. Come to all fours, hands directly under the shoulders. With the knees on the floor, lower to the ground the same way as a standard push-up, just with the knees helping to stabilize the body rather than the feet.

Alternating Med Ball Push-Up
This variety increases range of motion, and works core stability. Place one hand on top of the medicine ball, while the other stabilizes the body on the floor. Adjust the body into a plank (only this time, one arm is supported by the ball). Perform a standard push-up, then roll the ball to the other hand and repeat.

Single Leg Push-Up
This push-up is tricky, because the body is stabilized by only three points rather than four. Perform a standard push-up, but raise one leg up toward the ceiling, heel reaching toward the wall behind you. Alternate legs after each rep, or perform two sets (starting with one leg, then switching to the other for the next set). Clap Push-Up
These push-ups are all about plyometrics, meaning the hands lift off the ground,, clap, then return to the floor. To break it down: Perform a standard push-up, but at the exhale, swiftly straighten the arms and forcefully push off the floor. Bring the hands together into a clap, then return to the start position. Note: This is not a beginner’s exercise, and requires quite a bit of strength (and practice!) to perform correctly.

Handstand Push-Up
Handstands? Why not! These push-ups really amp up the demands. And we’re not kidding, they take a lot of practice and coordination (and usually a wall, maybe even a spotter for your first go at it). Position the body against a wall and practice a static handstand before lowering into the push-up. Once you’ve mastered that, slowly lower the body down a few inches then press back up to a full handstand. Eventually, work toward lowering down completely to the floor before pushing back up. Carefully lower those legs and it’s a wrap.

THE MOST COMMON PUSH-UP MISTAKES (AND HOW TO FIX THEM)

The Mistake: Focusing too much on the upper body.

The Fix: Sure, push-ups are known for strengthening the pecs, shoulders, and triceps, but they’re a total-body move. Pay attention to the glutes and legs, and keep ‘em tight! Tightening that tush can help keep the lower back from arching during the move. Instead of letting the bum flop down first (and compromising the lower back), hit the ground chest first, keeping the hips in the same plane as the shoulders. Imagine the belly button drawing in toward the spine to help keep the torso flat.

The Mistake: Flaring the arms.
The Fix: Letting those arms pop out to 90 degrees can be really tough on the shoulders. Instead of forming a “T” with the arms and body, keep the elbows tucked close to the body.

The Mistake: Forgetting to breathe.
The Fix: Faith Hill had it right: Just breathe. Concentrating on form and reps can make it easy to forget one of the most important parts of working out — breathing.Inhale on the way down, and exhale on the way back up.

The Mistake: Cheating Yourself.
The Fix: The key is quality over quantity. Make sure each push-up reaches a full range of motion by getting the chest as close to the floor as comfortable, then fully extending the elbows at the top. Having sloppy form will make for a less effective strengthening exercise that targets fewer muscles.

How do you push up? Any tips we missed? Let us know in the comment section below, or tweet the author at @nicmcdermott.