Neuroscientists and the Dalai Lama Swap Insights on Meditation

by Christof Koch:  An encounter with His Holiness the Dalai Lama and the scientific study of meditation. 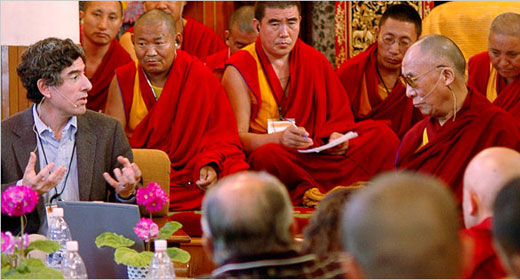 Knowledge can be communicated, but not wisdom. One can find it, live it, do wonders through it, but one cannot communicate and teach it.

This line from Herman Hesse’s 1922 novelSiddhartha came unbidden to me during a recent weeklong visit to Drepung Monastery in southern India. His Holiness the Dalai Lama had invited the U.S.-based Mind and Life Institute to familiarize the Tibetan Buddhist monastic community living in exile in India with modern science. About a dozen of us—physicists, psychologists, brain scientists and clinicians, leavened by a French philosopher—introduced quantum mechanics, neuroscience, consciousness and various clinical aspects of meditative practices to a few thousand Buddhist monks and nuns. As we lectured, we were quizzed, probed and gently made fun of by His Holiness, who sat beside us [see photograph above]. We learned as much from him and his inner circle—such as from his translator, Tibetan Jinpa Thupten, who has a doctorate in philosophy from the University of Cambridge, and from the French monk Matthieu Ricard, who holds a Ph.D. in molecular biology from the Pasteur Institute in Paris—as they and their brethren from us.

What passed between these representatives of two distinct intellectual modes of thinking about the world were facts, data—knowledge. That is, knowledge about the more than two-millennia-old Eastern tradition of investigating the mind from the inside, from an interior, subjective point of view, and the much more recent insights provided by empirical Western ways to probe the brain and its behavior using a third-person, reductionist framework. What the former brings to the table are scores of meditation techniques to develop mindfulness, concentration, insight, serenity, wisdom and, it is hoped, in the end, enlightenment. These revolve around a daily practice of quiet yet alert sitting and letting the mind settle before embarking on a specific program, such as “focused attention” or the objectless practice of generating a state of “unconditional loving-kindness and compassion.” After years of daily contemplative exercise—nothing comes easily in meditation—practitioners can achieve considerable control over their mind.

Twelve years of schooling, four years of college and an even longer time spent in advanced graduate training fail to familiarize our future doctors, soldiers, engineers, scientists, accountants and politicians with such techniques. Western universities do not teach methods to enable the developing or the mature mind to become quiet and to focus its considerable powers on a single object, event or train of thought. There is no introductory class on “Focusing the Mind.” And this is to our loss!

From introspection, we are all familiar with the mental clutter, the chatter that makes up our daily life. It is a rapid fire of free associations, of jumping from one image, speech fragment or memory to the next. Late-night lucubrations are particularly prone to such erratic zigzagging. Focusing on a single line of argument or thought requires deliberate, laborious and conscious effort from which we flee. We prefer to be distracted by external stimuli, conversations, radio, television or newspapers. Desperate not to be left alone within our mind, to avoid having to think, we turn to our constant electronic companions to check for incoming messages.

Yet here we had His Holiness, a 77-year-old man, who sat during six days, ramrod straight for hours on end, his legs tucked under his body, attentively following our arcane scholarly arguments. I have never experienced a single man, and an entire community, who appeared so open, so content, so happy, constantly smiling, yet so humble, as these monks who, by First World standards, live a life of poverty, deprived of most of the things we believe are necessary to live a fully realized life. Their secret appears to be mind control.

Among the more extreme cases of mind control is the self-immolation of the Vietnamese Buddhist monk Thich Quang Duc in 1963 to protest the repressive regime in South Vietnam. What was so singular about this event, captured in haunting photographs that are among the most readily recognized images of the 20th century, was the calm and deliberate nature of his heroic act. While burning to death, Duc remained throughout in the meditative lotus position. He never moved a muscle or uttered a sound, as the flames consumed him and his corpse finally toppled over.

I am filled with utter bewilderment in the face of this singular event and would have found it difficult to accept as real, were it not captured in the testimony of hundreds of onlookers, including jaundiced journalists with their cameras.

A step toward a brain-based explanation of this extraordinary phenomenon comes from a recent scanning experiment by Fadel Zeidan, Robert C. Coghill and their colleagues at the Wake Forest School of Medicine. Fifteen volunteers were recruited to lie in a scanner while a small metal plate was attached to their right calf. As its temperature varied from pleasant (near body temperature) to painful (49 degrees Celsius), subjects had to rate both pain intensity and pain unpleasantness of the noxious stimulus. Predictably, the hot probe triggered increased hemodynamic activity in structures that are known to be involved in pain processing, such as the primary and secondary somatosensory cortices that represent the leg, as well as more frontal structures, the anterior cingulate cortex and the insula. Subsequently, the volunteers underwent four days of 20 minutes’ daily practice of mindfulness meditation involving focused attention or the Buddhist mind-calming practice calledshamatha. In the latter, the practitioner focuses attention on the changing sensations of her breath, noting thoughts, pictures and memories as they arise from their inner source, but without any emotional engagement. This exercise frees her to quickly disengage from them to return attention to monitoring her breathing.

Practicing mindfulness during the noxious stimulation reduced the unpleasantness of the pain by a whopping 57 percent and its intensity by 40 percent. And this after only minimal training (four times the 20 minutes). Of course, it is a far cry from attenuating the unthinkable agony of burning to death, but still. Mindfulness exerts its effect by promoting a sense of detachment and by reducing the subjectively experienced saliency of the heated metal plate. Yet how does it work in the brain?

Pain-related activity in the primary and secondary somatosensory cortices was reduced by the meditation. Those subjects who experienced the greatest reduction in the intensity of their pain had the largest increase of activity in their right insula and both sides of their anterior cingulate cortices. Subjects with the greatest reduction of the unpleasantness of the pain—which is what most people care about—exhibited the greatest activation of regions in the orbitofrontal cortex and the largest reduction in the thalamus (gating the incoming sensory information).

Think of mindfulness, think of all meditations, as mental skills to control emotions and to shape the impact that external events, such as sight, sound or heat, have on the sensory brain. Select prefrontal regions in the practitioner’s brain reach all the way down to the thalamus to reduce the flood of incoming information from the periphery, leading to a lessening of the pain. These skills to steer the mind are not magical, otherworldly or transcendental. They can be learned by sufficiently intensive practice. The only question is whether our instruments are always sufficiently sensitive to pick up their footprints in the brain.

In 2008 Richard J. Davidson and his group at the University of Wisconsin–Madison published a classic study with the active participation of Ricard and other Buddhist monks. The cognitive scientists fitted skullcaps with 128 electroencephalographic (EEG) electrodes to the heads of eight long-term Buddhist practitioners and 10 student volunteers. The former were asked to attain a state of “unconditional loving-kindness and compassion” (a form of meditation that does not focus on a single object and is sometimes referred to as “pure compassion”), whereas the volunteers thought about somebody he or she deeply cared about and then tried to generalize these feelings to all sentient beings.

The onset of meditation in the monks coincided with an increase in high-frequency EEG electrical activity in the so-called gamma band (spanning 25 to 42 oscillations a second), which was synchronized across the frontal and parietal cortices. Such activity is thought to be the hallmark of highly active and spatially dispersed groups of neurons, typically associated with focusing attention. Indeed, gamma activity in these monks is the largest seen in nonpathological conditions and 30 times greater than in the novices. The more years the monks had been practicing meditation, the stronger the (normalized) power in the gamma band.

More important, even when the monks were not meditating, but simply quietly resting, their baseline brain activity was distinct from that of the students. That is, these techniques, practiced by Buddhists for millennia to quiet, focus and expand the mind—the interior aspect of the brain—had changed the brain that is the exterior aspect of the mind. And the more training they had, the bigger the effect.

Yet knowing about meditation and its effect on the brain is not the same as benefiting from it and not the same as achieving wisdom. So just like the young Siddhartha in Hesse’s novel, I left the monastic community richer in knowledge about a different way to look at the world but continuing to strive.