The Aluminum Airship of the Future Has Finally Flown

by Andrew Tarantola:  There was once a time when man looked to the skies and expected to see giant balloons rather than airplanes drifting above. The Hindenburg Disaster promptly put an end to those dreams. But nearly a century later, one company may have finally figured out how to build a dirigible suitable for the 21st century. Just don’t call it a blimp. 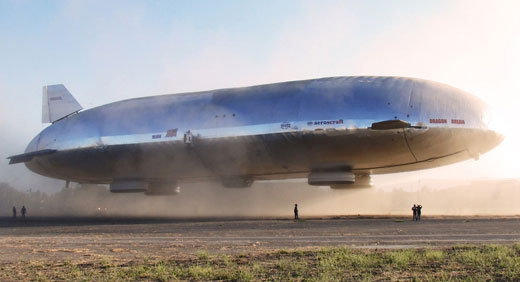 This is a new type of rigid aircraft. It’s not a blimp, and it’s not an airplane, but this thing has the potential to alter the way we… Read…

This fully rigid airship, dubbed the Aeroscraft, differs fundamentally from, say, the Goodyear blimp. Blimps, by definition, have no internal structure and maintain their shapes only through the pressure of the gas they contain; when the gas escapes, they deflate like the gigantic balloons they are. Rigid airships, like zeppelins before them, maintain their shape regardless of gas pressure thanks to an internal skeleton structure—the Hindenburg utilized highly flammable balsa wood, but the Aeroscraft’s is made of aluminum and carbon fiber—and maintains its buoyancy with a series of gas-filled bladders. And unlike hybrid airships, the Aeroscraft doesn’t require forward momentum to generate lift via a set of wings. It’s all helium power.

The Aeroscraft has been under development by Aeros Corp, the world’s largest airship and blimp maker, since 1996. The project has received over $35 million in R&D funds and the government has even lent the company a couple of NASA boffins to help develop the aerodynamics and control systems. And with the successful launch of its half-scale prototype, the Pelican, last weekend, the investment looks to have paid off. The future of lighter-than-air travel looks to be imminently upon us.

Unlike blimps that maintain a constant buoyancy and rely on ballast and fans to adjust their altitude, the Aeroscraft will employ a unique bladder system that can alter the craft’s static heaviness (relative to air) at will, dubbed COSH (Control of Static Heaviness). The system actually works quite similarly to how submarines use compressed air to float.

The Aeroscraft is equipped with a series of pressurized helium tanks. When the pilot wants to increase altitude, non-flammable helium is released from the tanks through a series of pipes and control valves, into internal gas-bladders called helium pressure envelopes (HPEs). This increases the amount of lift the helium generates, reduces the craft’s static heaviness, and allows it to rise. When the pilot wants to descend, the process is reversed. This allows the Aeroscraft to easily land and take on cargo or passengers without having to be tied down or add external ballast. Additionally, the Aeroscraft will be equipped with a trio of engines—one on each side and a third on the belly—and six turbofan engines to provide thrust and augment the COSH’s lift, as well as aerodynamic tail-fin rudders and stumpy wing control surfaces, for high speed travel—that is, above 20 mph. Oh it’ll get you there, it’s just going to take a while.

Now, the US government didn’t drop $35 million just to build a better balloon. Airship technology is being developed to provide a vital role in modern world: runway-less cargo delivery. Getting even modest amounts of supplies and people to remote areas by plane can be a nightmare; you’ve either got to find a suitable runway or be prepared to parachute. From the Australian outback to the Alaskan hinterlands, there are plenty of locations around the world that are simply inaccessible to conventional airplanes. Not so with the Aeroscraft.

With a proposed lifting capability of 66 tons and no need for a landing strip, these airships should be able to deliver just about anything just about anywhere in the world. Cargo can either be loaded into the Aeroscraft’s internal cargo bay or slung under the blimp using the company’s proprietary ceiling suspension cargo deployment (CSCD) system. which automatically balances the hanging load to prevent it from swinging around and crashing the dirigible.

While the Pelican successfully lifted off last Sunday, it did so under cautionary tethers. Its first untethered flight is expected to happen within the next few weeks. Eventually, the company hopes to produce a trio of Aeroscraft models: the 66-ton capacity ML866, the 250-ton ML868, and the 500-ton ML86X. There’s even discussion of turning them into giant floating hotels for serene 80-day global circumnavigations. [Defense Update – PopSci – Gizmag – Images: Aeros]