by Danielle Graham:  Do you remember a time when you fell in love and your body felt “lighter than air”? Reprinted by permission of SuperConsciousness, www.superconsciousness.com What about stress and the feelings of the “weight of the world” upon your shoulders? Have you also experienced that sensation? 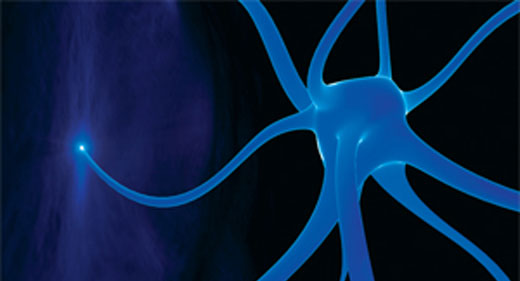 Generally these experiences of “lightness” or “heaviness” are considered neurological or biological phenomenon. But what if those experiences, or even the anticipation of joyful, stressful or emotional events, have a material effect on the gravitational or electromagnetic fields that surround our bodies?

In 2006, I published some preliminary research results showing an anomalous affect that people have on both the geo-electro-magnetic fields and the gravitational forces that surround us. These experimental findings indicate there was indeed a significant change in the earth’s geomagnetic field direction and strength when 1,000 advanced students at Ramtha’s School of Enlightenment® sat down together to simultaneously practice mind development disciplines. However, these phenomena were not limited to only the time of the actual activities themselves: The augmentation of these fields clearly began 45 to 60 minutes before the beginning of each discipline, indicating a marked effect on the surrounding field merely by the “anticipation” of the activity scheduled for that specific time.

The gravitational force data published in the same paper evolved over the next year. Experimental results would eventually show that a person in a deep state of concentration and focus has a demonstrable effect on the ambient gravitational force within their immediate proximity.

Just about everyone has had the experience of being so engrossed in an activity, perhaps a hobby or an artistic endeavor, that in the enjoyment of the moment there was a loss of time, and even a loss of awareness of the surroundings. One minute it was 2:00 in the afternoon, and then all of a sudden, it’s 7:00 pm yet it felt as if only a few moments passed. That is an experience of absolute focus and in that state, we actually have an effect on the ambient fields around us – even gravity.

Based on hundreds of hours of rigorous testing, the research findings demonstrating this gravitational anomaly have shown themselves to be repeatable and predictable. However, when the research progressed to monitoring people during other states of awareness, even during simple conversation, surprising results were recorded: Our emotions also appear to affect gravity as well.

In tightly controlled experimental conditions, research subjects were monitored while carrying on conversations, moving in and out from rather mundane to highly charged emotional discourse. For instance, in the case of one experimental subject, she became excited during political discussions and her data demonstrated changes in gravitational force when she changed from talking about her garden to politics. A hypothesis emerged: the kind of the effect we have on gravitational force directly correlates with our state of mind. This phenomenon has been previously unrecognized and unobserved in the physical sciences.

In this issue, Dr. Berk of Loma Linda University speaks about another material manifestation of anticipation: Our biological self responds at the mere expectation of humor, laughter and joy. His research shows unequivocally that laughter has an effect on our neurology, neuro-chemistry, hormones, endocrinology, immunology, and genetics both during and before states of joyful laughter.

Yet, physiological change is also observed during many different human responses. Long-standing research indicates a broad range of emotional states that have powerful effects on our biology, and not always health-generating ones. Just as research data shows that our bodies will react in anticipation of a happy event, we can logically hypothesize that our biology will demonstrate change whether the anticipation of an experience is joyful or not.

The above-mentioned preliminary experimental physics research indicates that we have a demonstrable effect on many of the physical systems we exist within. We interface with the earth’s gravitational force surrounding us in different ways, depending on our state of mind or emotion. Anticipation of future activities is shown to correlate not only with changes of the earth’s geo-magnetic fields, but also changes within our own biology. And happy laughter promotes healthy biological effects. Together, these diverse scientific disciplines point towards a revelutionary perspective: Our intrinsic experiences of life are interactive and inextricable with the environment that surrounds us in ways previously unrecognized by science.

The implications of such phenomena have yet to be investigated in academic and research arenas. Our current scientific models and theorems do not incorporate these variables into a broader understanding of the impact we have on our environment and our bodies – these gifts of life. However, the future sciences will integrate diverse disciplines and in doing so, will bring about a more comprehensive and unified understanding of this miracle we experience as life. Physics will no longer be marginalized from the biological/ neurological sciences and vice versa.

In broadening the scope of scientific understanding, we develop a more empowered overview of ourselves within the world, the perceivable universe. When those perspectives expand, we evolve. And the very anticipation of such a future transforms physical reality within and around us.

The evidence demonstrates this is possible.

Danielle Graham is the Founder and Executive Director of the NW Frontier Research Institute (NWFRI) in WA State. NWFRI’s experimental research focuses on human-generated gravitational and electromagnetic anomalies and is published by the American Institute of Physics.

Have you experienced having a day where you could do no wrong – when you knew something positive was going to happen for you?  Comment Below