Deepak Chopra: An ‘Inner Stillness,’ Even on the Subway

Deepak Chopra, the controversial New Age guru and booster of alternative medicine, lives just below the penthouse on the 69th floor of a Midtown West condominium. 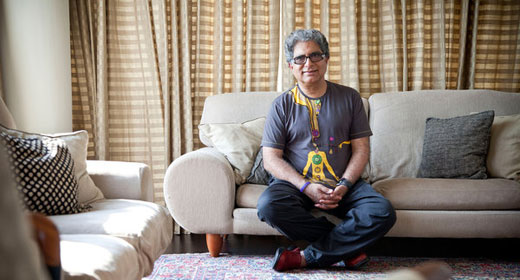 The long elevator ride gives fellow residents like P. Diddy abundant opportunity to buttonhole the good doctor and seek guidance about their mantra and yoga issues. Sometimes, the encounter even results in a house call. “They invite me for a cocktail or to teach them meditation and I go,” said Dr. Chopra, an internist by training. “What the heck.”

He and his wife, Rita, bought the two-bedroom 10 years ago based on a floor plan before construction began. “I liked that my apartment was brand-new so I was the first person to live in it,” said Dr. Chopra, who is almost 66. “We had a smaller one-bedroom place in a much older building and I thought we should have another bedroom so we could have a houseguest or if our kids visit.” He has two adult children and three grandchildren. “I loved the area and wanted to stay in it.”

Eagerly, he enumerated the neighborhood’s charms. Whatever ethnic food you are in the mood for — it’s all around the corner and available at any hour.

The subway is handy, a big deal for Dr. Chopra, who proudly announced that he had not set foot in a cab in more than five years.

CNN, where he is a frequent guest and an occasional host, is two blocks away, while his publisher is in the exact same building as his apartment. “I can walk in there anytime, much to the annoyance of my editors, and have a discussion face to face,” said Dr. Chopra whose new book, “What Are You Hungry For?” comes out next month. (Note to annoyed editors: Try meditation.)

It’s an article of Dr. Chopra’s faith that he can attain what he calls “inner stillness” anywhere. “I’ve cultivated it just closing my eyes. I can be in the subway and still have that feeling,” he said. “Of course it’s important to bring that feeling to where you eat and sleep. Every home is imbued with the consciousness of its tenant.”

His own home is something of a shrine, with statues of Ganesh, Vishnu, dancing Krishna (“He’s the artist, dancer, lover, everything,” Dr. Chopra said) and the goddess Lakshmi. “Every day I get fresh flowers for her,” Dr. Chopra said, gently touching a white tulip tucked near the idol’s base. He turned and pointed to a form of Shiva that was ringed with beads.

“When my kids come they bring a necklace and put it on him,” Dr. Chopra said. “He’s the guru of gurus. I sit here and meditate every morning.”

But the apartment is as much a tribute to Dr. Chopra’s cultural heritage as it is an expression of his spiritual beliefs. Like a museum docent, he walked around the living room gesturing at an assemblage of Rajasthani miniatures (“they’re storytelling paintings that are very hard to find now”); nodding at a reproduction of a work by M. F. Husain (“he was called India’s Picasso, I knew him”); pointing to a portrait of Rabindranath Tagore, the Nobel Literature laureate in 1913 (“I grew up on his poems”).

The kitchen is small, but Dr. Chopra cooks several times a week — fish curry and Goan cuisine are specialties of the house. And even though he was going out for dinner that night, the contents of a round tin on the counter filled the air with the scent of, well, a few things. This was, as seems often the case with Dr. Chopra, a teachable moment.

“The seven colors of the rainbow are the colors of these spices,” he said, “and they are all rich in phytochemicals.” This was a reference to naturally occurring compounds that some believe reduce the risk of illness.

Although Dr. Chopra has long been based in Southern California, “I feel very good about this apartment,” he said. “It is slowly becoming my primary residence.”

“My wife travels back and forth — I only go when I’m teaching a course at the center,” he added, referring to a facility he co-founded to offer instruction in yoga, meditation and mind-body awareness, a topic that Dr. Chopra’s detractors think he has greatly oversimplified. “We have a big house that overlooks the ocean. It’s idyllic. You can walk on the beach and see the dolphins, and to a visitor that would be amazing. But to me at my state of life, I can get like almost brain-dead after a while. I need the stimulus of the city to keep my mind dynamic.”

Some of that stimulus comes from the incredible eyeful outside his windows: the Statue of Liberty, Times Square, the ball dropping on New Year’s Eve. “I feel a lot of energy when I look at the view,” he said. “The apartment is my extended body, and when I look out the window and see the steel and concrete — that’s my exoskeleton.”

Fortunately, Dr. Chopra doesn’t suffer from vertigo. “No,” he said firmly. “I don’t have anyailment.”