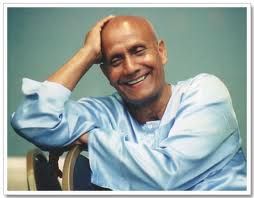 Yoga means union, inseparable oneness with God. A Yogi is one who has established conscious union with God. He can easily become a musician because in his inseparable oneness with God, he can do anything he wants. But a Yogi has to wait for God’s Will. If it is God’s Will, he will become a musician; or if it is God’s Will, he will become something else. Otherwise, he will just remain with his own lofty realisation and oneness; he will reveal and manifest the highest Peace, Light and Truth the way the Supreme wants him to.

When an individual realises God, he and God are not different beings; they are one, like a tiny drop and the vast ocean. In the same way, sometimes the soul responds to music. The soul thrills to music; it just melts and becomes one.

A Yogi’s qualities and a musician’s qualities can go side by side, provided the Yogi has the capacity and inherent talent for music. Even if the Yogi spends a very short time in the musical world, he can be a very good musician, but it will take infinitely more time for a musician to become a Yogi.

Spiritual Masters who have musical capacity can eventually show the world at large that inner music can be played outwardly and appreciated by the world. Inner music one can hear and one can create while one is meditating. We can hear inner music through aspiration. What is inner music? We have learned from the Indian Vedas that this music is the mother tongue of humanity, the language of the soul. It is through music that the Divine in us gets the opportunity to manifest itself here on earth.

When a musician’s spiritual capacity becomes most powerful, he doesn’t even have to speak. Others will just look at his face and see some illumination.

When a spiritual Master plays his music, through his music he enters into the heart and soul of the audience. At the same time, he is bringing down light from above. He is not just playing on an instrument. He is receiving something from the higher world and then offering it to the world at large. In an hour, thousands of people can feel this higher light as their very own. So music has the opportunity, the capacity, to claim the universe as its very own.

Music and religion are like the obverse and reverse of the same reality-coin. Music in its purest sense is religion and religion in its purest sense is music. This music-religion, this code of life, this universal language of the soul, can only be offered; it cannot be purchased or sold. Music and religion are for the seekers, for the music-lovers, for the truth-servers. Money-power or earthly name and fame cannot lord it over these two immortal realities, these two earthly and heavenly treasures.

The source of true music and the source of true religion will always remain the same, and that source is a cry, a birthless and deathless cry — an eternal hunger. It is a hunger not for one’s own satisfaction, but for God’s Satisfaction in God’s own way. When music and religion come from this source, only then will the message and beauty of music and the message and beauty of religion be divinely illumining and fulfilling.

The Mogul Emperor Akbar employed the great musician Tansen in his court. One day when Akbar was deeply appreciating Tansen, Tansen said, “I am not a great musician.”

Akbar said, “You are not only a great musician; you are the best musician.”

But Tansen said, “No, my Guru, my teacher, Haridas, is by far the best.”

The Emperor said, “Then bring him to my palace!”

Tansen replied, “No, he will not come. He does not care for name and fame. He plays only for God. God’s Compassion is his sole reward.”

Akbar said, “Then I will have to go to him. Take me to him.”

Tansen agreed, but he told Akbar, “You cannot go as the Emperor. You have to go in the guise of my servant, my slave.”

So Akbar went to Tansen’s teacher as a servant, and Tansen begged his teacher to play for Akbar. Unfortunately, Haridas was not in the mood to play. Then a brilliant idea struck Tansen’s mind. He started playing, deliberately making many mistakes. Haridas could not believe his eyes and ears. How could his best student make such deplorable mistakes? Out of great surprise and shock, he started playing in order to correct his student. In this way the Emperor came to realise that Tansen’s teacher was indeed far superior to Tansen.

When they came back to the palace, Akbar asked Tansen, “How is it that you cannot play as soulfully as your teacher does?”

Spiritual music can inspire non-spiritual listeners in the same way that God inspires unaspiring humanity. In the beginning there was darkness; then there was light. Because God has always inspired unaspiring humanity, this light is continually increasing. If some individuals are not aspiring right now, it is the bounden duty of those who are already awakened to inspire them in the same way that the Supreme, out of His infinite bounty, inspired and continues to inspire the ones who are now well established in the world of aspiration.

Each individual has a heart. Spirituality is in the heart, with the heart and for the heart. It is only a matter of time before the heart responds to spiritual music, which embodies the beauty and purity of music in its pristine form and in infinite measure.
A great musician can add to the inner cry of the person who practises a spiritual life. And if the musician himself believes in God wholeheartedly, then his music can be of tremendous help to his own spiritual practice.

What do you concentrate on when you play music?

You have created thousands of paintings, poems and songs. Where does this endless fountain of creativity come from?

Is there art in other worlds besides earth?

Yes, there is art in other worlds and other planes of consciousness apart from earth, but this art is not for manifestation. This art is something that exists for its own sake. It comes spontaneously. Here on earth, whenever we do something, even if we just exist, we do it for the sake of others. A tree has flowers and fruits. Even if the tree doesn’t want to give me anything, still I can climb up its trunk and eat its fruits or pluck its flowers, or I can just enjoy its shade if I want to. But in the other worlds it is not like that. There you can appreciate the beauty of something, but you can’t claim it or use it for your own purpose. Here on earth, as soon as art is created, you can steal it with force or buy it or plead with the artist to give it to you. In the other worlds, you can at most appreciate it, but you can’t capture the art, you can’t claim it, you can’t acquire it, because it is not manifested.

In other worlds you see the Gandharvas—the celestial musicians like Narada, who is the most prominent one. There is a particular world where a constant assembly of musicians is held. There is also a world for artists in the inner world. There are some artists who have not taken incarnation but just remain in this inner world. Again, some great artists, spiritual artists from earth, go to this world to enjoy it when they leave the body.

O Master-Musician,
Tune me for life again.
The awakening of new music
My heart wants to become.
My life is now mingled
In ecstasy’s height.