by Fu-ding Cheng:  We all have blind spots, areas in our psyche that we just can’t see. Psychologically, they reveal themselves as wounds

that secretly drive our actions without us ever knowing about them. Carl Jung called them the “shadow.” He urged individuals, as well as humanity, to face these dark, unsavory aspects hidden in our unconscious. Joseph Campbell called them in The Hero’s Journey “the hidden movers, the ultimate enemy the hero must confront on his transformational journey. In Zen practice, the willingness to face this shadow side is called “eating bitter,” and is an essential step on the path to liberation.

In the shamanic tradition, we refer to the most debilitating of these as “the original wound.” Typically, they’re setup during early childhood when we were the most impressionable. We then consider them as a part of life instead of an aberration of our upbringing, and, alas, we suffer accordingly.

These “original wounds” continually sabotage our best efforts because we hardly know they exist (they are in our blind spot, after all). Or we deny their existence and shove these issues back into the shadows since most of us prefer to endure customary torments rather than break out into the unknown territory called peace and fulfillment.

Thus, we pass them off as irritating distractions to our workaday lives and create attitudes that keep us from ever dealing with them, “I don’t have time for navel-gazing. I’m in the real world.” Little do we know that true happiness is impossible without facing these wounds.

This pattern is illustrated by a friend who was a very talented actor who was one of the stars in a movie that won “Best Picture” in the Academy Awards. He was a true artist and had “everything going for him” (at least in the conventional sense)––talent, wealth and fame. At the height of his stardom, contrary to character, he suddenly began making irrational decisions and speaking so caustically to those around him that he undermined his own stardom.

“You can’t trust the world,” he would say, “When youth and beauty fade, they throw you away like a used Kleenex.”

His wound had been caused by a traumatic incident suffered when young––he had been given away to an institution as a child, which triggered a deep sorrow and mistrust of the world. Under the glare of his sudden fame, he could no way tend to this issue.

His antagonistic actions led to more abandonment. No one would work with him anymore because he was too belligerent on the set. And now, no one knows about him; he has virtually disappeared from the public’s eye. His attitude became a self-fulfilling prophecy. This unfortunate story is but another example of the insidious power of the parasite to sabotage us from within.

The good news is that more and more of us have not only developed the will to face our own wounds, but also to practice the techniques to heal them once and for all. With increasing number of “tools” available, it’s our choice to create a new version of heaven on earth. 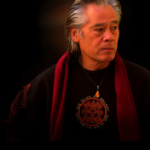