By Valerio Tosetti/Sonakin: Yoga, meditation and relaxation have always been issues away from the gaming sphere; titles that attempt to immerse the player in a more metaphysical counted on the fingers of one hand. Deepak Chopra’s Leela tries to fill this gap in a way again, catapulting the player in full in this visionary world and catharsis. 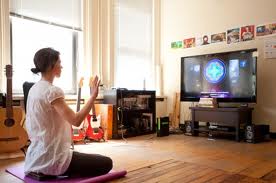 If these few lines have intrigued you, read on. You might have some nice surprise. For many who probably do not know him, Deepak Chopra is one of the most famous guru of transcendental meditation, creator of the “primordial sound meditation.” The game is named after him, therefore, centered upon the meditation and relaxation. The first step proposed by game is the creation of their own Mandala, the icon that represents the essence of the spirit of the player. Once created, you can connect the game to Facebook by an icon and share our Mandala with friends. Each action is explained and marked by a voice (in English, at least in the version of the game I tested, the UK) which also serves as in-depth tutorial of every aspect of the game and the philosophy of meditation. The game itself, if we may so call it, is structured in two main ways: one concerning the development and opening up their “chakra”, the other dedicated exclusively to real meditation. The first mode is divided into 7 mini-games each linked to a different chakra, which represent the soul of the title and the purpose of which is to achieve total relaxation through the performance of small gestures. For example, the game of the first chakra, the center of the baseline, forces the player to bend the hips to the right or to the left: this movement will rotate a small planet and allow some seeds to grow up to develop into a tree, infusing the planet the same vital energy. Before each game, a short, mandatory tutorial explains carefully every gesture to be done to achieve the goal. Kinect is almost always accurate in the detection of movements, giving a truly immersive and almost never frustrating. The second and no less important mode of Deepak Chopra’s Leela is purely meditative, accessible through the “Reflect” in the menu. In this mode, we are taught the secret of breathing, thanks to the Kinect sensor that will monitor our ability to breathe properly through recognition of the movements of the body. “Reflect” is divided into three further categories: Breathing, to which I have just mentioned, Silent Meditation and Meditation Free. With the Silent Meditation, the voice that accompanies the player throughout the game explains the posture to be taken to relax to the fullest, while the Free Meditation is a mixture between the breathing mode and Silent Meditation: is monitored breathing, but no voice disturbs player leaving only the background music. Graphics and sound are the perfect glue for all elements of the game, with a soundtrack composed by new age music that can be very good in order to relax and immerse ourselves in the environment. Recommended in this case the use of headphones (or a surround system). LOVE An experience like no other- Deepak Chopra’s Leela does not fit properly in the category “games”, it is an experience. The atmosphere that you create using it is unique, only replicated by very few other titles in the entire gaming landscape. The graphics, the music, the structure of mini-games, combine perfectly to give the player one of the most beautiful experiences of this generation. Relaxing for real!- The first goal of the game is to relax the player. Target achieved in full. After a full day’s work, take a half hour to Deepak Chopra’s Leela helps to actually download the nerves and relax. Tutorials always comprehensive and never boring- They are usually used to “skippare” all the tutorials of the securities to which the game. This time, the tutorials are an integral part of the experience: the voice that accompanies the player, as well as explaining the fundamentals of the game, it also tells anecdotes and curiosities about chakra meditation and Yoga. The tone of voice is also relaxing and soothing, promotes a feeling of relaxation that leads to the title in the player. HATE In the long run may tire- Despite the good variety in the type of mini-games, the possibility that it may bore is high. In the early stages, the difficulty is low, while in the latter stages is almost frustrating, partly because Kinect is not always precise in the detection of body movements. In addition, once all the levels of all the games, practically nothing remains to be done if not free meditation. WE PULL THE MONEY Deepak Chopra’s Leela is a well-managed, innovative, fresh and unique. And ‘yet another demonstration of how video games are approaching art. Definitely one of the best titles available for Kinect, both as an idea and as a final realization. Obviously it is not for everyone as a title that will appeal only to those looking for a certain type of experience: recommended for those who have an open mind to new experiences. 8.5