by Jeff Baenen: Jeff Ansorge once commanded a staff of 17 and made around $80,000 a year as executive chef at a posh downtown Minneapolis restaurant where a 24-ounce dry aged Porterhouse steak goes for $48. 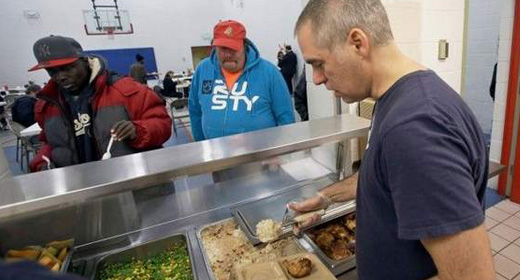 But he gave it all up to become the head cook of a Salvation Army soup kitchen, where the meals are free.

Now he brings his culinary skills to bear making salmon, ribs and stews for the poor and homeless who come to The Salvation Army Eastside Corps Community Center in St. Paul. For the Thanksgiving meal that’s being served Wednesday, Ansorge planned a traditional feast of turkey with stuffing, mashed potatoes and gravy, cranberry sauce and rolls, served on tables covered with white tablecloths.

“It is not your old-fashioned soup kitchen where you get a bowl of soup and a piece of bread and (are) sent on your way. He makes phenomenal meals that you would pay quite a bit of money to go to a restaurant and have,” Salvation Army Capt. John Joyner said of Ansorge, who left The Capital Grille to run the soup kitchen.

“This is outstanding. On a scale of 1 to 10, I give him an 8-and-a-half, yep,” Donnie Richardson, 55, a homeless man from St. Paul, said over a meal of chicken thighs, rice and mixed vegetables in the center’s white-walled gymnasium.

Ansorge, 40, says a spiritual awakening led him to his new job at the soup kitchen in October 2012, making just one-third of his previous salary.

“I went through a divorce. I was suffering from major depression for four years. And my priorities were all wrong,” Ansorge recalled while standing near the center’s pantry shelves. “I wanted the high-paying job. I wanted the big house. I wanted the cars. I wanted all that. And ultimately, none of that satisfied me.”

Ansorge started cooking when he was 16 at a mom-and-pop restaurant. He went to school in Rhode Island, earning degrees in culinary arts and food service management before joining The Capital Grille, where he spent 12 years.

Now Ansorge is lucky to get as many as three volunteers to help him in the soup kitchen. On a recent Thursday, Ansorge — a trim man with short gray hair — set up the tables, seasoned, seared and baked the chicken thighs, dished up meals and wiped down the tables afterward. Instead of a traditional white chef’s hat and uniform, he wears a dark blue T-shirt with the words “SHIELD CREW” in white with the red Salvation Army insignia, and blue jeans.

Raised Catholic, Ansorge — a former altar boy — said he drifted away from his faith in his 20s and 30s. Despite his prominent position at the restaurant, Ansorge said he was spiraling downward.

“My priorities were backwards. I had a big mortgage, I had car payments, I had credit card debts,” Ansorge said. “And now I have none of that.”

He sent about 10 applications to mainly Christian nonprofits, hoping to make a change. He chose The Salvation Army because “it’s a nonprofit that works with people that need help.”

Joyner said The Salvation Army initially felt Ansorge was overqualified. But none of the other candidates seemed a good fit.

“His credentials are unbelievable. He could easily be making two, three times what he makes working for us. But he told us that he wanted to give back and he really wanted to do this,” Joyner said.

Susan Dunlop, chef and co-owner of Joan’s In The Park restaurant in St. Paul, worked with Ansorge for nearly three years at The Capital Grille. She says she’s not surprised by his decision.

“That’s his true passion. He wanted to do something where he was giving back to the community,” Dunlop said. “It’s who he is. He needs to do that to be happy.”

Ansorge didn’t just bring cooking skills. Joyner said Ansorge’s shopping skills save the organization money. said he looks for bargains on food nearing its expiration date that grocery stores don’t want to sell but has been frozen and is salvageable. The Salvation Army also has a partnership with the Second Harvest Heartland food bank that allows it to get 40-pound cases of mixed poultry for $5, he said.

Ansorge came to the soup kitchen, The Salvation Army spent $28,000 on its lunch program at the East Side center. In Ansorge’s first year there, he spent $13,000 on the lunch program. The center serves from 80 to 140 people each day at its Monday through Friday noon meal.

Ansorge also tries to bring nutritional value to whatever meal he serves. For some, it may be their only meal of the day.

He’s eliminated desserts and cut back on the fat and sugars in meals.